« Just Released: U.S. Economy in a Snapshot—More Data for More Charts | Main | The Economics of Bank Supervision: So Much to Do, So Little Time » 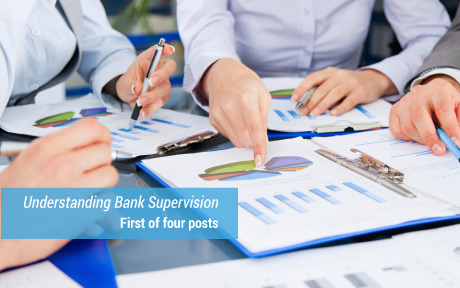 Last month the New York Fed held a conference on supervising large, complex financial institutions. The event featured presentations of empirical and theoretical research by economists here, commentary by academic researchers, and panel discussions with policymakers and senior supervisors. The conference was motivated by the recognition that supervision is distinct from regulation, but that the difference between them is often not well understood. The discussion focused on defining objectives for supervising the large, complex financial companies that figure so prominently in our financial system and ways of measuring how effectively supervision achieves these goals. This post summarizes the key themes from the conference and introduces the more in-depth posts that will follow in this blog series.

The Goals of Supervision
After opening remarks by William Dudley, the Bank’s president, the agenda began with two sessions exploring the goals of supervision. The first theme to emerge was the crucial, but sometimes misunderstood distinction between supervision and regulation. As Dudley observed, regulation involves defining the rules by which banks operate, including permissible and impermissible activities, minimum capital and liquidity standards, and rules governing ownership and control of commercial banks. Supervision involves monitoring and overseeing the firms. Key elements of supervision include ensuring compliance with law and regulation, assessing whether the firms are involved in practices that could threaten their stability or long-run viability, and ensuring that firms remediate such “unsafe or unsound” practices or conditions. Importantly, a lot of what bank supervisors do is confidential, both the information they assess and their remediation actions.

A second theme to surface was about defining the proper objectives of supervision. What should supervisors be striving for, at each firm and for the financial system as a whole? The Federal Reserve has outlined broad objectives for the supervision of large financial institutions—to lower the probability of a firm’s failure or inability to serve as a financial intermediary and to reduce the impact of such an event on the financial system and economy. Speakers agreed that supervision should address both goals, not merely the first. Further, panelists argued that the goals should also include ensuring that the financial system functions efficiently and provides the credit and other financial services needed to foster a robust economy.

Participants also discussed how supervision might complement regulation by, for example, being more flexible, or adaptable, as market practices evolve and being better able to incorporate and act on “soft information” that might not be codified in “hard” rules. Several speakers stressed the importance of judgment by supervisors, arguing that a key part of their role is to be forward-looking in identifying risks at firms and in the financial system. They asserted that effective supervisors combine technical and interpersonal skills and, importantly, are willing to act under uncertainty even when facing resistance from the firms they supervise. Clear regulatory standards can enhance and empower supervision by providing benchmarks to support supervisory actions. Effective supervision also evolves with events; several speakers cited the introduction of stress testing as a critical new tool arising from the financial crisis.

Assessing Supervisory Effectiveness
The afternoon sessions focused on measuring the impact and effectiveness of supervision. Several participants pointed out the importance of having clear supervisory objectives and defining metrics to measure against those goals, while recognizing the challenge in identifying measures that are prospective or forward-looking. Several speakers endorsed taking a “horizontal perspective” to facilitate the spread of good practices across firms, pointing to programs such as the Comprehensive Capital Analysis and Review (CCAR) and Comprehensive Liquidity Analysis and Review (CLAR) as supervisory innovations that promote such perspectives. Participants also observed that providing bank management and boards of directors with a sense of their firm’s performance relative to peers can be a powerful way to incentivize change. That said, speakers also cited the importance of absolute, not just relative, judgments about whether the practices of each institution are sufficient to ensure stability.

Another issue highlighted by participants was the confidentiality of much of the information used by supervisors and the analysis and actions that derive from it. This confidentiality limits the ability of analysts and researchers outside of the supervisory agencies to independently assess the impact and effectiveness of supervisory actions—or in many cases, to even know what they are. Participants pointed to the potential value of independent assessments and argued that overcoming this opacity without sacrificing essential confidentiality would advance understanding of what supervisors do and how well they do it. In particular, some speakers recommended disclosing issues about individual banks identified by supervisors, perhaps with a delay, or developing methods for researchers to access confidential supervisory data, such as ratings, in controlled settings.

Research on Supervision
The conference featured several papers by New York Fed economists. We provide synopsis of the papers and links below. In the rest of this blog series, the papers’ coauthors will provide more detailed treatments of each topic.

Next Posts in This Series:
The Economics of Bank Supervision: So Much to Do, So Little Time
Thomas Eisenbach, David O. Lucca, and Robert Townsend

A Peek behind the Curtain of Bank Supervision
Paul Goldsmith-Pinkham, Beverly Hirtle, and David O. Lucca

David O. Lucca is a research officer in the Federal Reserve Bank of New York’s Research and Statistics Group.
Posted by Blog Author at 10:07:00 AM in Banks, Financial Institutions, Regulation