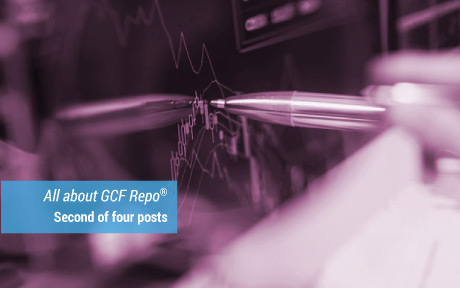 In this post, we provide a different perspective on the General Collateral Finance (GCF) Repo® market. Instead of looking at the market as a whole, as we did in our previous post , or breaking it down by type of dealer, as we did in this primer, we disaggregate interbank activity by clearing bank and by collateral class. This perspective highlights the most traded collateral and the extent to which dealers at a clearing bank are net borrowers or net lenders. This view of the market is informative given the proposed changes announced recently by the Fixed Income Clearing Corporation.


GCF Repo by Asset Type
The table below lists the nine collateral classes that make up the GCF Repo market. 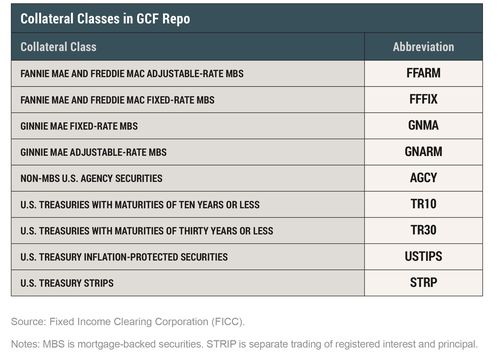 We start by looking at gross activity—defined as the sum of all repos and reverse repos done by dealers in our sample, in a given asset class on each day—to see which assets are the most traded. The chart below shows the distribution of the gross activity over the fourth quarter of 2015. The “box and whisker” chart represents the quartiles of the daily distribution of gross positions. The bottom and the top of the blue box represent the first and third quartiles, while the red center band shows the median. The whiskers represent the smallest and largest non-outlier observations, where an outlier is an observation that lies more than one and a half times the interquartile range above the third quartile or below the first quartile. The two most traded collateral classes in GCF Repo are U.S. Treasury securities with maturities of thirty years or less, and Fannie Mae and Freddie Mac fixed-rate mortgage-backed securities (MBS). All other collateral classes have a much smaller volume of activity. In fact, U.S. Treasuries with maturities of ten years or less and Ginnie Mae adjustable-rate MBS do not appear at all in the sample. 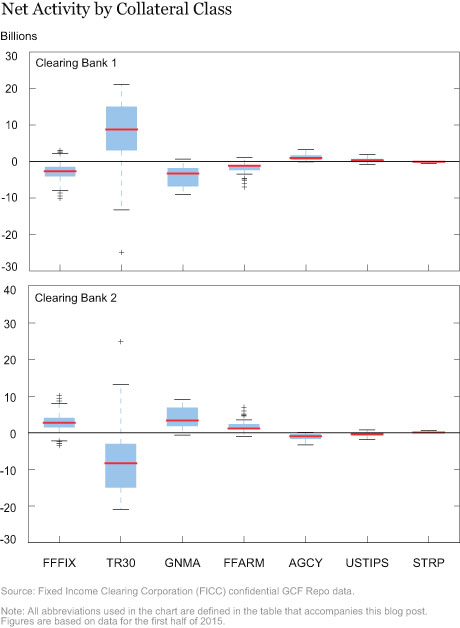 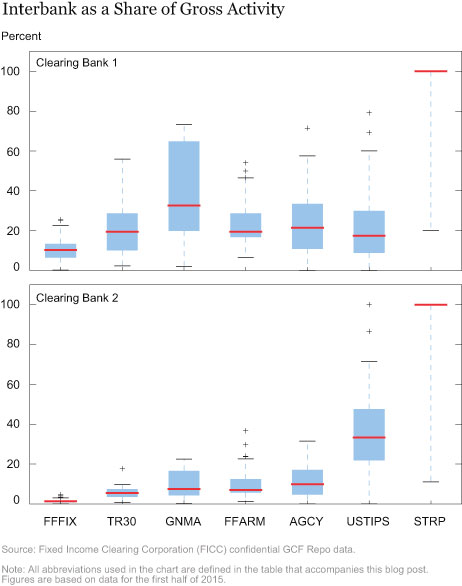 Among the smaller asset classes, the interbank share can be much larger. For clearing bank 1, on the average day, 49 percent of Ginnie Mae fixed-rate MBS settles via interbank, and U.S. Treasury STRIPs settle entirely on an interbank basis for more than 90 percent of the days in the fourth quarter of 2015. This is largely owing to the fact that the gross activity in these asset classes is very small, as shown above.

In our previous post, we showed that interbank GCF is a small share of the tri-party repo market as a whole. In this post, we looked at each asset class in the GCF market to see how much activity currently settles using interbank GCF. We find that in dollar terms, U.S. Treasuries with maturities of thirty years or less and Fannie Mae and Freddie Mac fixed-rate MBS are, by far, the two collateral classes that currently settle the largest amounts on an interbank basis. However, as a fraction of total GCF activity, the amount that settles interbank in these two collateral classes is fairly small.