Why Dealers Trade in GCF Repo®

Editors’ note: The original version of this post had the terms “borrowers” and lenders” reversed and had some figures wrong. The corrected figures do not suggest, as before, that dealers who switch between borrowing and lending are pursing collateral swapping strategies. We regret the error. (August 16) 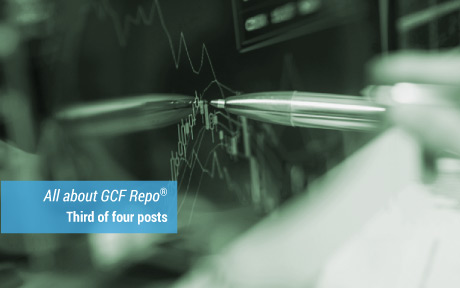 In this post, the third in a series on GCF Repo®, we describe dealers’ trading strategies. We show that most dealers exhibit highly regular strategies, using the GCF Repo service either to borrow or to lend, on net, on almost all the days in which they are active. Moreover, dealers’ strategies are highly persistent over time: Dealers that use GCF Repo to borrow (or to lend) in a given quarter are highly likely to continue to do so in the following quarter. Understanding how dealers trade in the GCF Repo market may provide insight about the role of the repo market more generally and about how recent regulations and market reforms can affect dealers’ trading strategies.

The GCF Repo service, offered by the Fixed Income Clearing Corporation (FICC), allows dealers to exchange government securities for cash among themselves anonymously, with FICC as a central counterparty.

Dealers enter into GCF Repo contracts for various reasons, including raising funds, obtaining collateral, and providing transactional liquidity in the repo market. A previous LSE post describes dealers’ strategies at an aggregated level, showing that dealers affiliated with a bank holding company act differently, as a group, than unaffiliated dealers; in contrast, our work focuses on individual dealers, and the persistence of their GCF Repo market trading strategy.

As seen in the table below, of the fifty-seven dealers active in GCF Repo over our sample period, eleven are classified as lenders and twenty-nine as borrowers. Only seventeen dealers pursued mixed strategies, where their net positions varied between borrowing and lending cash. 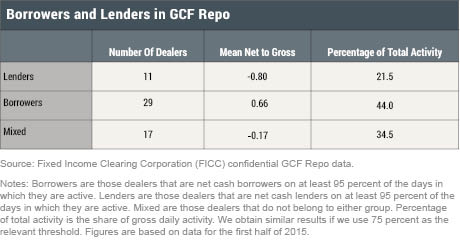 To measure the importance of a dealer’s net position to its total gross activity, we compute each dealer’s net-to-gross ratio and take the average for each group of dealers. Net activity is the sum of cash borrowed (a positive number) and cash loaned (a negative number) by a dealer in a day, and gross activity is the sum of the absolute value of cash borrowed and cash loaned. Borrowers’ mean net-to-gross ratio is 0.66, which means that 66 percent of borrowers’ total activity in GCF Repo is attributable to borrowing. By this measure, then, borrowers’ other strategies in GCF Repo take a backseat to raising funds. Similar results are found with lenders—80 percent of lenders’ activity is attributable to lending.

We also repeat our analysis above for a given asset class. We focus on the two asset classes that dominate GCF Repo activity—U.S. Treasuries, and Fannie Mae and Freddie Mac fixed-rate mortgage-backed securities. We find that the same general pattern discussed above continues to hold: For a given asset class, borrowers and lenders account for the majority of activity, both in terms of the number of dealers and as a percentage of activity. 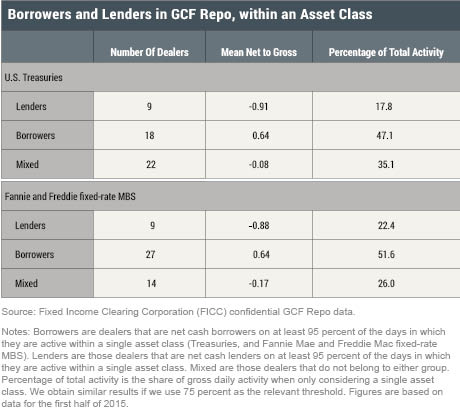 We now turn to examining the persistence of dealers’ trading strategies in GCF Repo. The table below reports the frequency with which a borrower remains a borrower, becomes a lender, or becomes unclassified (mixed) between two given quarters during the period October 2012 to September 2015. As the second row of the table shows, 93 percent of borrowers in a given quarter remain borrowers in the following quarter; analogously, 81 percent of lenders remain lenders and 63 percent of mixed remain mixed. In other words, over our sample period, we find that dealers follow highly persistent strategies. Strikingly, lenders never switched to become borrowers from one quarter to the next and, similarly, borrowers switched and became lenders only 0.3 percent of the time. 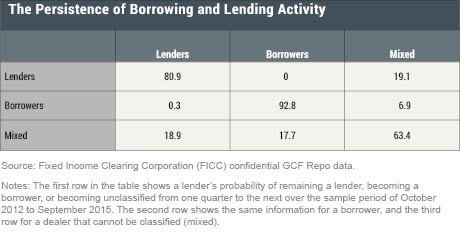 We show that the majority of individual dealers follow consistent strategies in GCF Repo, where dealers are net borrowers or lenders on almost every day that they are active. Moreover, dealers’ strategies are highly persistent over time: Dealers that use the facility to borrow (or to lend) one quarter are very likely to do so the next.

Adam Copeland is also an officer in the Group.