« Implementing Monetary Policy Post-Crisis: What Do We Need to Know? | Main | Forecasting Interest Rates over the Long Run » 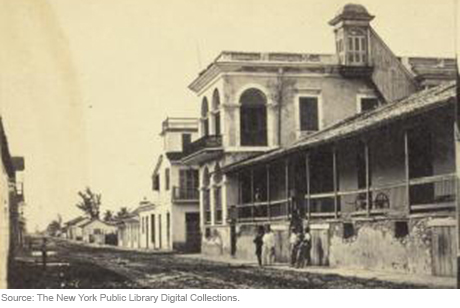 Did you know that the Federal Reserve once had not one, but two offices in Cuba?

In the early years of the twentieth century, U.S. currency was in wide circulation in the Caribbean nation, a legacy of the Spanish-American War. But that had become a problem.

In late 1920, according to details provided in a report from the Federal Reserve Board, the Cuban Government sought help from the State Department to establish a local Federal Reserve agency, “for the redemption of all old and deteriorated currency circulating on the Island, because it was regarded as dangerous to public health.”

The Atlanta Fed investigated the feasibility of establishing an agency and in 1921 passed a resolution asking the Board to allow it to set up the operation. Then, in 1923, the Boston Fed issued its own resolution asking to establish an agency in Havana for the purpose of conducting operations permitted under Section 14(e) of the Federal Reserve Act. Atlanta protested, saying it was geographically closer to Cuba.

The President of the United States, Warren G. Harding, believed the presence of a Federal Reserve agency would help expand American commerce, while the U.S. ambassador to Cuba hoped it would prevent the possible establishment of a Cuban central bank and check the growth of Canada’s banking interests in Cuba. After a hearing in May 1923, the Board announced that both Boston and Atlanta could open agencies in Havana. The Board gave Boston “priority in the purchase and sale of all cable transfers and bills arising out of our trade with Cuba” and reserved to the Atlanta Bank, “the right to supply the currency involved in such transactions or otherwise entering into circulation on the Island.”

Both agencies opened for business on September 1, 1923. This dual arrangement did not last long due to friction between both parties. Boston closed its Havana operation in 1927 and the Atlanta Fed assumed its functions. Then in 1935, in an attempt to share operational costs, the Board decided that the Havana agency would be run by Atlanta on behalf of all twelve Reserve Banks. However, a Cuban currency was launched that same year, and after several years of operating deficits, the Federal Reserve officially closed its doors in Cuba in 1938. 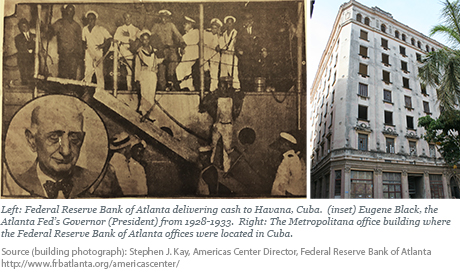 Although the presence of the Federal Reserve in Cuba was relatively brief, it included a notable rescue of the banking industry.

Spreading rumors of a possible bank failure resulted in a run on banks in Havana over the course of an April weekend in 1926. In order to prevent the collapse of the Cuban banking system, the Atlanta Fed sent a shipment of currency to the island. The $26.5 million was too heavy to be delivered by plane. Instead, its journey began on a train that left Atlanta on Saturday, April 10, and reached Key West, Florida, the following afternoon. From there, the journey continued on a gunboat to Havana, which arrived on Monday morning, just in time to replenish local banks and assure customers that all was well.

Initially deemed a success, the mission was haunted by accusations of having been a “joy ride” for members of the Atlanta team. Deputy Governor Joseph L. Campbell of the Atlanta Fed faced allegations that he failed to keep proper records of the transaction and used “intoxicating liquor” on the trip to Cuba. This situation fueled tensions between Atlanta Fed employees and the Board of Governors, and ultimately led to Campbell’s resignation.

Thank you for this very interesting piece of FRS history.

Interesting. Thanks for sharing.