« How Have High Reserves and New Policy Tools Reshaped the Fed Funds Market? | Main | Implementing Monetary Policy Post-Crisis: What Do We Need to Know? »

How does monetary policy affect spending in the economy? The economic literature suggests two main channels of monetary transmission: the money or interest rate channel and the bank lending channel. The first view focuses on changes in real interest rates resulting from a shift in monetary policy and corresponding responses in consumption, saving, and investment. The second view focuses on changes in the supply of bank credit resulting from an altered policy stance and concomitant changes in spending.

Conceptually, it’s not clear how much the bank lending channel affects aggregate spending (see this recent literature review); although monetary tightening drains deposits from the banking sector, banks don’t necessarily have to reduce their lending in response. For example, banks could maintain their lending levels by reducing their cushion of liquid assets or substituting wholesale funding for retail deposits.

To investigate whether banks compensate in this way, we look at changes in the liquid asset ratio and wholesale funding ratio of the banking sector against changes in the federal funds rate (see chart below). It’s easy to see that while liquid asset holdings tend to decline during monetary tightening, the wholesale funding ratio tends to increase. As we discussed in a previous post, big banks can substitute in this way more easily than smaller banks due to their better access to wholesale funding. This allows them to better smooth their lending during monetary tightening and mitigate the impact of a policy change on lending. 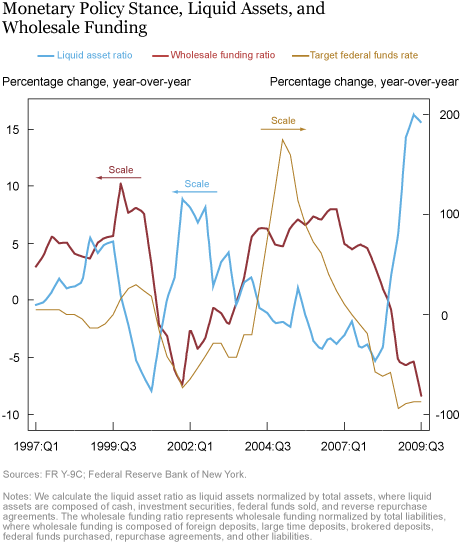 The recent financial crisis clearly revealed the importance of liquidity risks such as those posed by wholesale funding drying up when banks most need it. In response, the Basel Committee on Banking Supervision has introduced new liquidity regulation, such as the Liquidity Coverage Ratio (LCR), requiring banks to hold enough liquid assets against potential liability outflows. Could the new liquidity regulation limit this sort of substitution? The LCR assumes higher outflows from wholesale funding than from traditional deposits (for example, it estimates a 3 to 10 percent runoff rate for retail deposits versus up to 100 percent runoff rates for other wholesale funding sources). Therefore, large banks can’t mechanically switch to wholesale funding sources when their LCR is binding; they also can’t automatically rely on their liquid asset “cushion,” since that would also lower their LCR. In other words, a monetary tightening could impose additional costs for big banks if they try to smooth their lending when a liquidity requirement is binding. Furthermore, big banks tend to have fewer liquid assets while relying more on wholesale funding (see chart below), so their LCRs may be more binding (or bind sooner) in a monetary tightening. 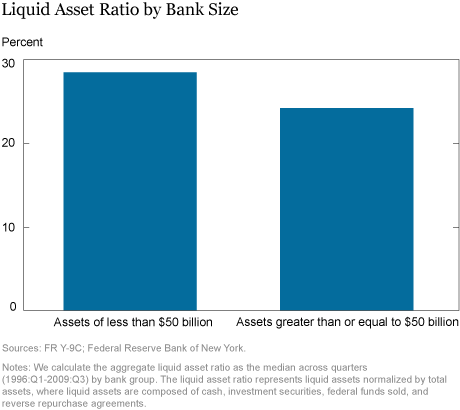 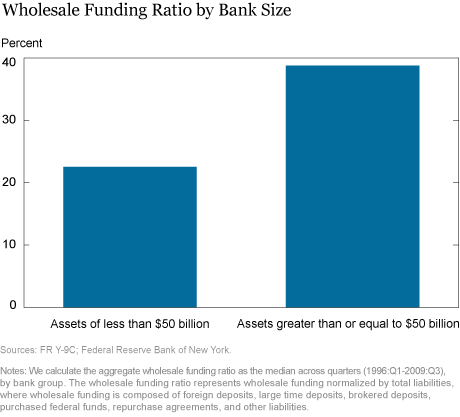 These findings suggest that the bank lending channel could have a more pronounced effect on spending in the presence of liquidity requirements. Of course, our prediction is subject to the Lucas critique—big banks could conjure up ways to circumvent this issue. Moreover, this liquidity constraint seems to be less binding now, due both to weak credit demand and abundant reserves on bank balance sheets. Nevertheless, there is a real possibility that with the advent of liquidity regulation, the bank lending channel could matter more in terms of monetary policy transmission in years to come.

Dong Boem Choi is an economist in the Federal Reserve Bank of New York’s Research and Statistics Group.

Thank you. We updated the link.

the 1st link is broken (on “literature review”)