How Have High Reserves and New Policy Tools Reshaped the Fed Funds Market?

Over the last decade, the federal funds market has evolved to accommodate new policy tools such as interest on reserves and the overnight reverse repo facility. Trading motives have also responded to the expansion in aggregate reserves as the result of large-scale asset purchases. These changes have affected market participants differently since, for instance, not all institutions are required to keep reserves at the Fed and some are not eligible to earn interest on reserves. Differential effects have changed the profile of participants willing to borrow and lend in this market, and this shift provides an opportunity to study how unconventional policy actions shape participant incentives. In today’s post, we take a detailed look at regulatory filings to identify the main players in today’s fed funds market and understand how their roles have evolved.

Measuring the size of the fed funds market has been challenging traditionally. Practitioners and researchers have resorted to regulatory filings to estimate the amount of fed funds sold and purchased at quarter-ends. On March 1, the New York Fed began publishing aggregate data on fed funds volume (see announcement), which will make these data easily accessible for future research.

Some fed funds participants did not file regulatory reports over the last ten years. Prior to 2012, not all thrifts were required to file the FR Y-9C or FFIEC 031/041. Earlier filings are only available for a type of thrift, the state savings banks, which file the FFIEC 031/041 and comprise about one third of all thrifts. We are also missing information on Freddie Mac and Fannie Mae since their regulatory filings report combined fed funds and repo activity. This has more of an impact on lending volumes before 2010 since financial statements indicate that Freddie Mac and Fannie Mae reduced their presence in the market by 2011 and are currently inactive.

How “big” is big?
As of the end of 2015, borrowing in the fed funds market reached $56 billion, a big number to be sure, but only about a fourth of its size ten years ago and down from a peak of $280 billion in the first quarter of 2008. The main decline in fed funds volume occurred in late 2008 as the level of reserves in the United States rose to unprecedented levels (see chart below). As excess reserves increased, the need to borrow fed funds to meet reserve requirements and to clear balances gradually disappeared and many participants exited the market. 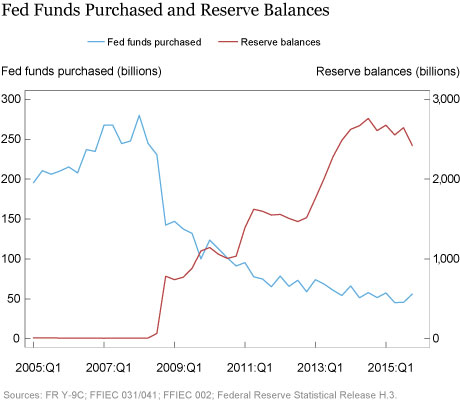 Over the last two years, the market has stabilized at around $50 billion on quarter-ends. Data published by the New York Fed show a sharp drop in daily volumes from an average of $69 billion in March to $50 billion at the end of the first quarter. This is consistent with incentives to reduce liabilities at quarter-end to meet regulatory requirements such as the Liquidity Coverage Ratio. This quarter-end effect and its impact on fed funds rate volatility was analyzed in a recent Liberty Street Economics post by Alex Entz, John McGowan, and Asani Sarkar.

Who’s who in fed funds?
As with any credit market, the fed funds market reflects the interaction of two sets of participants: those looking to borrow funds and those interested in lending. The chart below shows that the key borrowers are FBOs followed by U.S. and foreign BHCs. The market shares of fed funds borrowers remained fairly stable until 2013. In the last two years, the market share of FBOs has approached 65 percent due mostly to a drop in BHC borrowing. Stand-alone commercial banks and thrifts (not affiliated with a holding company) continue to play a limited role in the market. The composition of lenders, by contrast, has changed significantly. Federal Home Loan Banks have become the main supplier of fed funds, almost doubling their market share from 52 percent in 2008 to over 80 percent in 2015. This change reflects the effect of interest on excess reserves (IOER) and elevated excess reserves. IOER raises the opportunity cost of lending for eligible institutions such as BHCs, commercial banks, and FBOs, while institutions not eligible—such as Federal Home Loan Banks—still find lending below the IOER rate profitable. High excess reserves reduce demand for borrowing for funding purposes, making transactions above IOER uncommon, and IOER-eligible institutions less interested in lending.

Foreign participation in the fed funds market has also shifted since the crisis (see chart below). Ten years ago, the borrowing side of the market was split fairly evenly between domestic and foreign entities. Today, foreign borrowers account for almost 70 percent of the fed funds purchased. High excess reserves as well as regulatory requirements, including the change in the calculation of the Federal Deposit Insurance Corporation’s deposit insurance fee, have made fed funds borrowing less attractive for some domestic entities. The large presence of foreign borrowers also reflects constrained access to dollar liquidity that foreign institutions face. A recent paper by Acharya, Afonso, and Kovner studies this liquidity constraint around the asset-backed commercial paper market freeze during the financial crisis and shows that foreign banks with limited access to dollar liquidity charged higher rates to corporations on their syndicated dollar loans. On the lending side, domestic institutions are almost the only players nowadays, with a market share of over 95 percent. This shift is mostly explained by FBOs and foreign BHCs exiting the market. 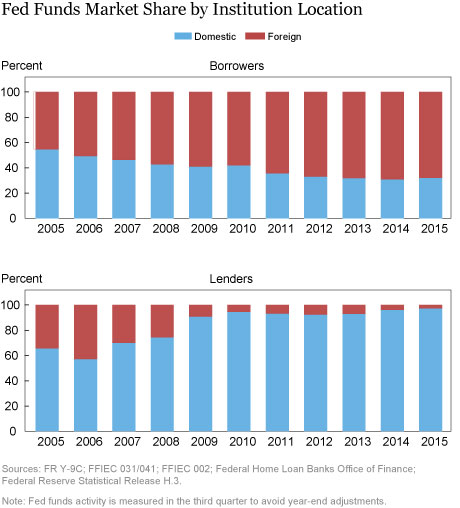 Over the last ten years, the fed funds market weathered the financial crisis of 2007-09, and a new regulatory regime that introduced novel monetary policy tools. Participants have adapted to these changes and formed a market led by Federal Home Loan Banks selling to FBOs and foreign BHCs in need of dollar funding. This period provides us with an opportunity to study how unconventional policy actions shape participant incentives in a market key to monetary policy implementation.

Sammuel Stern is a senior research analyst in the Research and Statistics Group.