« The Reluctance of Firms to Interview the Long-Term Unemployed | Main | Restoring Economic Growth in Puerto Rico: Introduction to the Series » 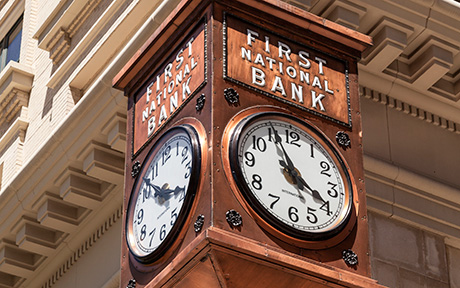 Also called “the bank with the clock” were the Home National Bank of Elgin, Illinois (see the story under “Town Clocks” and see a photo of the clock itself), and Commerce Bank and Trust Company, in Kansas City. A few banks are modern examples of the nickname: Monona State Bank in Wisconsin and Hopewell Valley Community Bank in Flemington, New Jersey (advertising itself in recent times as “the bank with the clock”) both feature modern clocks.

In older U.S. towns, it is possible to find historically interesting large public clocks in a town square, in front of an old administration building like a town hall, or in front of a bank. Remember, in the old days, not everybody walked around with a timepiece, so the public clock served a purpose other than looking and sounding pretty. The following passage from the Semi-centennial of the City of Utica, 1882 serves to illustrate the relative importance of the bank clock as well as the small number of clocks the townspeople might think of as “authoritative”:

Upon those halcyon days of banking I often look back with a sigh of regret, like one who has left the cool retreat of some sequestered nook, where he was lulled to repose by soothing murmurs, to encounter the heat and dust of an arid plain, amid the glare and turmoil of unremitting business activity. There was an air of imperturbability about this dignified institution [the old Bank of Utica], a placidity of demeanor, in marked contrast with the commonplace bustle which pervades the banking offices of this utilitarian period. Yet we were, to some extent, fast even then. The bank clock was ten minutes ahead of the town clock, so we opened the bank for business by the city time and closed it by bank time . . .

A 2013 New York Times article talks about plans to fix a historic clock in the Bronx building that formerly housed the Dime Savings Bank, and also illustrates the importance of a centrally located public clock:

But before its last ticktock years ago—no one remembers exactly when—this four-sided clock used to greet shopkeepers every morning, send children running home for supper, and remind drivers when to move their cars parked on the street. By night, it glowed with lights that illuminated the tenements and shops below.

A bank’s clock was important to the bank’s operations, in addition to acting as fancy and impressive “window dressing.” A short article in a November 1924 issue of the Evening Independent (St. Petersburg, Florida) is an illustration:

Importance of Speed in Handling Bank Business Emphasized with Clocks

Serving as constant reminders to visitors that time is always an important factor in the transaction of business in the Central National Bank and Trust Company, four clocks are in advantageous position in the new banking rooms to be thrown open for public inspection Tuesday morning.

The first of these clocks seen on entering the banking quarters has been built into the floor. As one steps into the entrance he passes over a heavy glass face of a large clock built under the floor to remind the visitor of the moment of his appearance. As he approaches the bank another clock of large size will be seen hanging outside. In both ends of the banking room itself will be seen a clock. These are of bronze.

Clocks are placed not only to serve the public, but also for the benefit of the large personnel of the bank, which prides itself in the conduct of business, whether in town or out of town, with all speed consistent with absolute accuracy.

Bank clocks are expected to be authoritative sources of the correct time: In a chapter titled “Seldom Early, Never Late,” in Allen C. Bluedorn’s The Human Organization of Time: Temporal Realities and Experience, the author describes studies of punctuality in different geographical areas, which included surveying the accuracy of bank clocks in cities all over the world.

Still, the clock did serve as fancy and impressive window dressing. Clocks remind us of accuracy, precision, steadfastness. The fact that the phrase “the bank with the clock” appears as much as it does points to the importance of the clock in people’s associations with the bank building. A newsletter from the South River Historical and Preservation Society in South River, New Jersey, talks about the history of one of the primary makers of bank clocks: the McClintock-Loomis Company (see video: The History of McClintock Clocks):

The initial design patents for the bank clocks are registered in the U.S. Patent Office as Nos. 40,233, 40,234, and 42,758. The clocks were available in two, three, and four dial models and became immensely popular. Thousands of different models were made and still can be seen in towns and cities throughout the country. Although primarily purchased by banks, many clocks were erected on government buildings, schools, or on free-standing pedestals and brackets and used as town clocks . . .

These beautiful clocks are an American original and have no equal. Sadly, many of them have deteriorated beyond repair and have been destroyed. Other clocks have had their original mechanisms and dials replaced with inferior substitutes. It is encouraging to note that there are citizen groups across the country which are dedicated to restoring these clocks to their original state.

We suppose the phrase “available in two, three, and four dial models” is referring to the number of faces on a particular clock; certainly the varying number of faces and, therefore, shapes (one-sided, two-sided, four-sided attached, four-sided free-standing, and lollipop) added to the clocks’ interest as well as their visibility to the public.

Many towns make a big effort to preserve their historic public clocks but, of course, the role of these clocks is different now. They are preserved for their historical significance, their beauty, and their symbolic value. The stately bank building with its beautiful and ornate exterior clock is a symbol of a time when the pace of change was slower and there seemed to be greater predictability and dependability. Towns that have cared enough to restore their bank clocks include Bellingham, Wash. (graphic), Faribault, M.N. (graphic), Hartford, Conn. (graphic), and Lincolnton, N.C. (graphic, and another). A 2000 article from a local Florida newspaper describes how an old bank clock was copied and recreated as the town clock:

In 1988, when the Punta Gorda Downtown Advisory Committee . . . decided that it needed a “focal point” for downtown Punta Gorda, the committee tried to buy the clock back from the Bank of Wauchula, but the bank would not sell it. . . . Others remember that when the Punta Gorda Downtown Advisory Committee . . . learned they couldn’t buy back the clock from the Bank of Wauchula, they decided that they needed to find a clock [that] resembled it. The committee . . . learned that the I.T. Verdin Company of Cincinnati designed and built clocks that “looked old” and they could build the type [of] clock the committee wanted for $25,000.

The Whitney Bank in New Orleans actually uses the image of its old bank clock as part of its logo. See video in which the bank’s historic clock was programmed to play “When the Saints Go Marching In.”