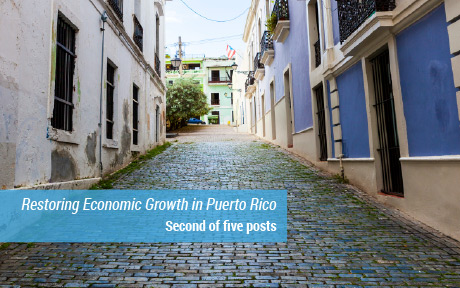 Puerto Rico’s population has been declining since 2004, falling nearly 10 percent from its peak, as shown in the chart below. Today, total population is below 3.5 million, lower than it was twenty-five years ago. While a decline in the Island’s birthrate is partially responsible, the main driver of this population loss is the out-migration of people from Puerto Rico to the U.S. mainland (see this Current Issues article for more details on these population trends). 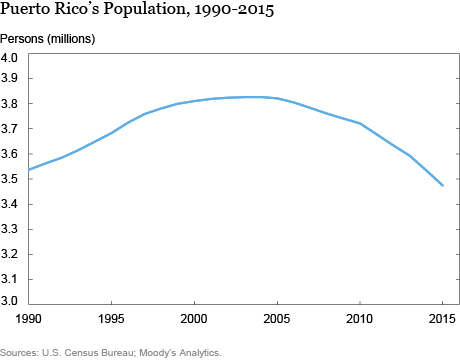 Because residents of Puerto Rico are U.S. citizens, they can move freely to the U.S. mainland, and many have made this move as the Island’s economy has deteriorated. With the unemployment rate in Puerto Rico running between 10 and 15 percent in recent years, and labor force participation at only around 40 percent, many residents are leaving the Island to seek better economic opportunities.

As the chart below shows, net migration—that is, in-migrants to the Island (from anywhere in the world) minus out-migrants moving from Puerto Rico to the U.S. mainland—has been negative every year since 1998. Moreover, net migration resulted in a loss of more than 65,000 people in both 2014 and 2015, a sharp increase compared with just a few years prior. All in all, Puerto Rico has seen a net loss of roughly 600,000 people as a result of migration over the past fifteen years, representing more than 15 percent of its peak population.

To make an appropriate comparison that addresses these complex selection issues, we extend a methodology set forth by Chiquiar and Hanson to examine the distribution of wages for out-migrants to the U.S. mainland relative to those who stay on the Island. This estimation technique puts workers’ wages on an equal footing by accounting for differences in the price of skill between the U.S. mainland and Puerto Rico. Our extension of this technique also allows us to adjust for differences in the probability of being employed between the mainland and Puerto Rico, given that labor force participation is lower and unemployment is higher on the Island. In essence, this estimation approach is akin to bringing all Puerto Rico migrants currently living on the U.S. mainland back to Puerto Rico and estimating the wages they would have commanded had they never left the Island. We account for a number of factors such as a person’s age, education, and experience, and the likelihood that they would be working. We limit our analysis to individuals aged 25-65 since younger workers may still be in the process of completing their educations, and therefore their current wages may not reflect their earnings potential. 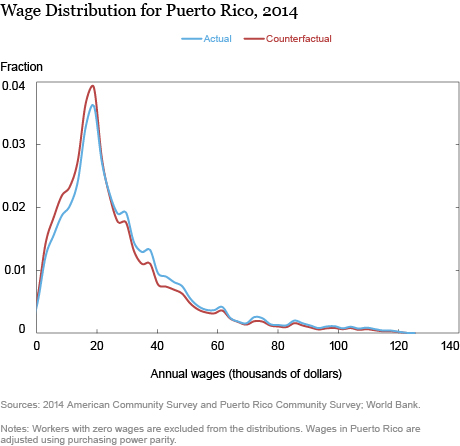 All in all, while the pace of out-migration from Puerto Rico is clearly a concern, it does not appear to be compounded by an outsized migration of those workers with the highest human capital, though a recent report points to a large out-migration of doctors in recent years. Importantly, however, this does not mean that “brain drain” is not a concern for the Commonwealth. Indeed, given the large number of people moving from Puerto Rico to the U.S. mainland in recent years, the Island has clearly lost a significant amount of its human capital.

A Major Challenge Lies Ahead

The magnitude of Puerto Rico’s out-migration creates a major challenge for the Island. Indeed, there is no resource more important to the long-term health of an economy than its human capital. If people continue to leave the Island at the pace that has been set in recent years, the economic potential of Puerto Rico will only continue to deteriorate. Puerto Rico urgently needs to provide more and better job prospects to its citizens to reduce incentives to leave. In addition, enhancing the Island’s appeal as a place to live and do business can serve to attract and retain people. Without more progress along these fronts, Puerto Rico’s out-migration and long-term economic malaise are likely to continue.

Giacomo De Giorgi is a senior economist in the Group.

Dear Authors: Thank you for confirming our concern. You are drawing conclusions about Puerto Rico’s current migration wave using data for all the people who have ever historically migrated from Puerto Rico to the U.S. In your response, you also inform the public that you “control for a number of individual characteristics in our analysis, including age”. Please explain in more detail. Are you giving the younger migrants a greater weight? How are you determining the weights? The authors should take another look at the official annually published estimates of the U.S. Census Bureau. You don’t need to make up your own estimates to understand the educational profile of Puerto Rico migrants on an annual basis. Here are the relevant deep links for the most recent 2014 data: https://factfinder.census.gov/bkmk/table/1.0/en/ACS/14_1YR/S1501/0400000US72 https://factfinder.census.gov/bkmk/table/1.0/en/ACS/14_1YR/B07409PR/0400000US72 In 2014, the percent of the population (25 years or more) of Puerto Rico that had at least some college degree or associate’s degree or higher, including a bachelor’s degree, a graduate degree or a professional degree was 46%. In 2014, the percent of the population (25 years or more) that migrated from Puerto Rico to the United States that had the same level of education was 46.9%. So, numerically speaking, officially speaking, a greater percentage of educated folks left the island than there were on the island. Statistically speaking, these differences are not statistically significantly different. Now, for some context, you are mixing migrants from the 2014 Puerto Rico population with migrants who may have moved in the 1950s. In the 1950 Puerto Rico Census, only 3.4% of the population (25 years or more) had some amount of educational time in college or more. Please explain how using statistical controls one can get around this huge difference in the source populations.

Thank you for your comments, Mr. Donnay. It is true that it would be more precise to look at recent waves of migrants rather than the entire group of those who have ever migrated from Puerto Rico. For the analysis we present here, we run into a problem with small sample sizes for recent waves of migrants, making it difficult to calculate reliable wage comparisons. However, we do control for a number of individual characteristics in our analysis, including age, which should mitigate some of the concerns about incorporating various migrant cohorts. Also, we have shown a similar result using more recent cohorts. In a blog post last year (http://libertystreeteconomics.newyorkfed.org/2015/04/population-lost-puerto-ricos-troubling-out-migration.html), we looked at the educational attainment of recent migrants compared to the Puerto Rico population using a three-year wave from 2011-13. We found that the educational attainment of recent migrants was below that of those who stayed on the Island, consistent with the notion that those who have been leaving generally have lower levels of human capital than those who have chosen to stay.

PR is similar to other regional labor markets in the 50 states. PR’s manufacturing sector is shedding jobs in the same manner as the manufacturing sector nationally. The biggest demographic problem in PR is the lack of inflows of retirees who prefer to retire in Florida and other states over the island. Retirees do not move necessarily to obtain high-paying jobs, so your wage analysis is not relevant to explain the dearth of inflows of retirees. The relevant factors missing in your analysis are the lack of security (real and perceived), and the high cost of food, utilities, and transportation. These high costs are created by regulatory barriers, rent-seeking capture of the government agencies by monopolists (e,g, the recent attempt by Uber to introduce a low-cost, job-creating alternative to the taxis in SJ).