« Now on Your iPhone: The Economic Research Tracker | Main | Is There Discount Window Stigma in the United Kingdom? » 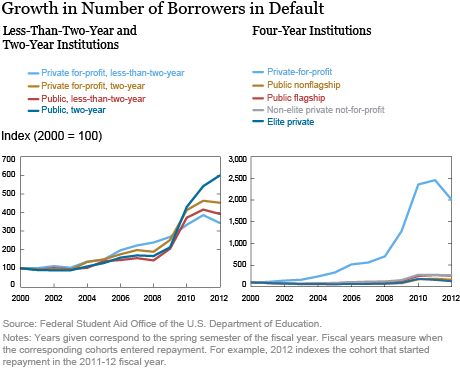 Among less-than-two and two-year institutions, the number of borrowers in default (NBD) has grown most dramatically for students at public, two-year schools. The growth in the number of borrowers in default at two-year, for-profit institutions follows close behind. As we saw in our post on the student loan market, there was a huge increase in the number of borrowers as well as a modest increase in the amount borrowed by students at these schools following the recession. The chart above shows that these newer borrowers have had a difficult time repaying their loans since leaving school and therefore many of them are entering default. Between 2000 and 2008, total loan originations at less-than-two-year and two-year institutions grew by 152 percent; the majority of students enrolling in these years would have entered repayment between 2000 and 2012. Tellingly, there was a more than five-fold increase in NBD between 2000 and 2012. Thus, the growth in NBD far outpaced the growth in loan originations in this sector.

Among four-year institutions, the growth of NBD at for-profit institutions dwarfed the growth in other sectors. This relates to the marked increase in the number of borrowers and loan originations in the four-year, for-profit sector during this period that we saw in the third post in this series. Between 2000 and 2007, total loan originations at four-year, for-profit schools grew by 430 percent. Between 2000 and 2012, when many of these borrowers would have entered repayment, NBD at these schools rose by more than 1,900 percent. As might be expected, NBD declined in most sectors as the economic recovery gained momentum in later years.

Moreover, the share of borrowers from four-year institutions entering default who attended for-profit schools has increased dramatically over the past twelve years. Beginning in 2009, and for every year thereafter, for-profit institutions accounted for more borrowers in default at four-year institutions than any other sector despite never accounting for more than 11 percent of enrolled students. Among two-year institutions, however, there is a marked increase in the share of borrowers who default after attending public schools, beginning in 2010 and continuing through 2012. This mirrors the trend we saw in our previous post showing large increases in the number of borrowers and loan originations in this sector. 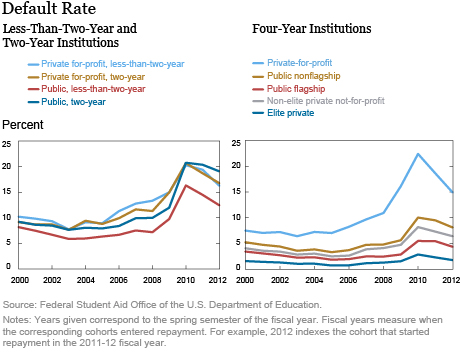 Finally, we turn to rates of graduation within 150 percent of scheduled time—in other words, three years for less-than-two-year and two-year institutions, and six years for four-year institutions. Interestingly, graduation rates appear to be fairly immune to the factors correlated with changes—such as the recession, changes in funding laws, enrollment growth—that we have examined during this series. As huge numbers of students flowed into the different types of institutions, these marginal students do not appear to have been any more or less prone to graduate on time. Similarly, the deterioration of the economic climate in 2009 does not appear to have encouraged students to take longer or to complete their studies more quickly.

The health of the student loan sector has deteriorated quite steeply from 2000 to 2015. While this is mostly concentrated in for-profit, four-year schools, the decline is much more widespread in the two- and less-than-two-year market and essentially spans all types of institutions in this market. The default rate and number of borrowers in default at all types of two- and less-than-two-year institutions increased markedly over the period of study, as they did at the private and for-profit, four-year institutions. In the two- and less than two-year market, this deterioration was particularly prominent at the public two-year institutions, but for-profit institutions followed close behind. The trends in the student debt market we observed and the default rate patterns we have described paint a sobering picture of trends in higher education loans. If these outcomes do not improve substantially over the near future as the economy continues to recover, these may serve as a drag on the financial well-being of the nation.