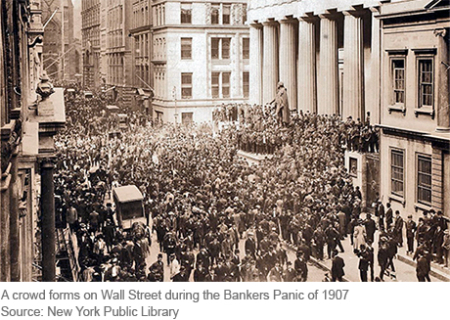 An Earthquake, a Silent Crash, and “Perverse” Elasticity

Some financial crises stem from a single, large shock while others result from a combination of smaller shocks; the 1907 panic was the latter type. The San Francisco earthquake, which had occurred 3,000 miles away and a year earlier, in April 1906, helped set the stage for the panic. Losses from the earthquake triggered massive insurance payments from British insurers, and as gold flowed from London to the United States, the Bank of England raised its discount rate to stanch the flow. The tighter monetary policy in the United States that resulted from gold flowing back to London caused a “silent crash,” with the stock market falling about 8 percent between September 1906 and March 1907 (Bruner and Carr). The economy slipped into recession in May 1907.

The tight monetary conditions were compounded by the usual autumn surge in demand for currency and credit by farmers harvesting and shipping their crops east. Absent a central bank to accommodate this seasonal surge in demand, interest rates would spike instead. This “perverse” elasticity of the money supply (Miron 1986) had sometimes triggered banking panics and was central in the “great debate” (Wicker) over the need for a central bank.

The final shock came on October 16 after a failed attempt to corner the stock of the United Copper Company. The main speculators were Augustus Heinze, who already owned much of United Copper and was president of a New York City bank, and Charles F. Morse, also a banker and “extreme character, even when judged by American speculative standards” (Sprague 1910, 248). When news of the failed corner surfaced, depositors ran on more than a dozen banks and trusts rumored to be connected to the speculators. The run on banks sparked by “blind, unreasoning fear” (Lefevre 1908 quoted in Frydman 2012) was fairly quickly contained after the New York Clearing House, a consortium of private banks that functioned like a de facto central bank, vouchsafed the solvency of its members and provided emergency loans (conditional on the banks severing ties to Heinze and Morse). The run on trusts, however, continued.

Trusts, seemingly safe intermediaries limited to fiduciary activities, played a prominent role in the 1907 panic that in some ways resembled the role of “shadow” banks in the 2007-08 crisis (Frydman 2012). Like shadow banks, trusts were less regulated than banks, less liquid, more levered, and perhaps most importantly, lacked direct access to emergency loans from the Clearing House (Tallman and Moen).

As the trust panic continued into the week of October 21, J. P. Morgan assembled a small team of young bankers, including Benjamin Strong, future head of the Federal Reserve Bank of New York, to examine the books of strained trusts and provide credit to those judged solvent. Knickerbocker Trust, the second-largest trust in the country, was first to apply. After spending half a day on Knickerbocker’s books, Strong’s team concluded that the firm’s solvency was uncertain and Morgan refused to lend. Knickerbocker Trust closed its doors on October 22.

Like the collapse of Lehman in 2008, Knickerbocker’s failure further eroded confidence in trusts and propelled panic throughout the financial markets as the trusts were forced to call loans and liquidate assets at fire sale prices in a desperate effort to raise cash (Frydman 2012). Alarmed, Morgan and the other bankers he recruited began lending more generously to the surviving trusts and orchestrated other emergency measures in conjunction with the U.S. Treasury, the Clearing House, and even John D. Rockefeller.

The panic of 1907 had severe and far-reaching repercussions. The recession that began in May of that year persisted until June 1908, with real GDP contracting more than 10 percent, about twice the decline experienced during the 2007-08 recession. The severity of the 1907 panic (and the many before it) convinced Congress that the country needed a long-term solution to modernize and stabilize the monetary system.

The Birth of the Fed: Conceived in Private but Born in Public

In 1908, Congress created a bipartisan National Monetary Commission, chaired by Republican Senator Nelson Aldrich, to investigate the recurring banking panics in the United States and to propose reforms. When after two years the commission still had not agreed on a course of action, Aldrich took matters into his own hands and arranged a private retreat to try and hatch a plan. Apart from Aldrich and his secretary, the only participants were a Treasury official (and Harvard economist) and three prominent Wall Street bankers. One banker, Paul Warburg, was an expert on central banking who, just months before the 1907 crisis, had compared U.S. banking to “Europe at the time of the Medicis” (New York Times, quoted in Richardson and Romero).

Aldrich held the participants to complete secrecy; they travelled by private rail car, using only first names, from New Jersey to the ultra-exclusive Jekyll Island Club in Georgia for a “duck hunt.” The hunters immediately agreed on the overarching goal of a central bank that would supply a uniform, elastic currency to the nation, but they differed on the details. After more than a week of sessions that stretched from morning to late night, they drafted a plan for a “National Reserve Association” with fifteen reserve bank branches around the country that would store member banks’ reserves, make discount loans, and provide payment services. The decentralized structure was critical; the planners knew that a monolithic central bank in Washington or on Wall Street would never pass given the deep, populist distrust of centralized financial power in the east. Though the Reserve Association would be decentralized geographically, its governance would be centered around private, member banks, which would have the power to elect the entire board of their district reserve bank, with more votes for bigger banks (Romero).

The secrecy of the Jekyll Island proceedings has long vexed Fed critics, but the proposal still needed public approval by Congress. In 1912 Aldrich introduced the plan in the Senate, where it stalled under objections to the dominant role of banks. After Woodrow Wilson was elected president later that year, Congressman Carter Glass and Senator Robert Owens, both Democrats, devised a plan very similar to Aldrich’s but with more public governance—specifically, a controlling Federal Reserve Board in Washington whose seven members would be appointed by the president and approved by the Senate, and a diminished role of bankers on the boards of the district reserve banks. The Federal Reserve Act,

an Act to provide for the establishment of Federal reserve banks, to furnish an elastic currency, to afford means of rediscounting commercial paper, to establish a more effective supervision of banking in the United States, and for other purposes,

was signed into law in December 1913 and the twelve Reserve Banks opened about a year later (A Return to Jekyll Island).

Our aim with this series was to chronicle the mostly forgotten financial crises that occurred over the three hundred years before the Great Depression. We would like to say that we end with the 1907 crisis because after the Fed was established there were no crises left to chronicle—were it only so. It is true, however, that the Fed has largely eliminated destabilizing, seasonal spikes in interest rates, and financial crises in the United States have certainly been less frequent since 1913 than before. In the near future, we will post a Q&A with various authors (those named above, plus David Skeie and Thomas Klitgaard) about the origins of Crisis Chronicles and the lessons learned from recounting twenty-four financial crises over three centuries. We have always welcomed and enjoyed your feedback, so one last time we say: Tell us what you think.