Beyond 30: Long-Term Treasury Bond Issuance from 1957 to 1965 -Liberty Street Economics 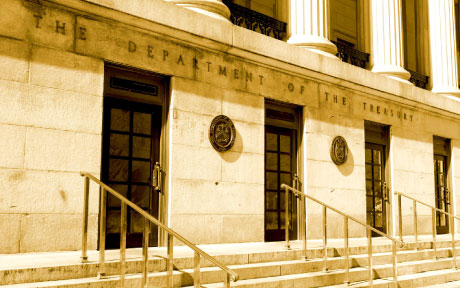 As noted in our previous post, thirty years has marked the outer boundary of Treasury bond maturities since “regular and predictable” issuance of coupon-bearing Treasury debt became the norm in the 1970s. However, the Treasury issued bonds with maturities of greater than thirty years on seven occasions in the 1950s and 1960s, in an effort to lengthen the maturity structure of the debt. While our earlier post described the efforts of Treasury debt managers to lengthen debt maturities between 1953 and 1957, this post examines the period from 1957 to 1965. An expanded version of both posts is available here.

New Management
Robert Anderson was sworn in as Secretary of the Treasury on July 19, 1957, and initially sought to continue his predecessor’s maturity extension program. On September 12, 1957, the Treasury announced a modest fixed-price cash subscription offering of $500 million of 12-year bonds. The Wall Street Journal described the offering as “an attempt . . . to feel out the possibility of again attempting to lengthen the maturity of the outstanding debt.”

The 12-year bonds were an unexpected success. The Treasury received $4.7 billion of tenders and issued $657 million of bonds, with large subscribers receiving 10 percent of the amount subscribed. Officials acknowledged that they had misjudged the market. As one official told the Journal, “There was much more interest in the long bonds than we anticipated, and much more than we were led to believe by our advisers.”

Seeking to take advantage of the evident demand for fixed-income securities, officials offered another $500 million of bonds in November, this time with a 17-year maturity. The offering attracted $3.8 billion of tenders, against which the Treasury issued $650 million of bonds. Large savings-type investors received 26 percent of the amount subscribed; all other large subscribers received 10 percent.

The dramatic turnaround in demand for Treasury bonds was driven by the onset of a recession, an easier monetary policy, and a sharp decline in interest rates. Long-term Treasury bond yields fell 50 basis points, from 3¾ percent to 3¼ percent, between October and the end of 1957. Early in 1958, The New York Times described the bond market as “a ferment of speculative activity” and observed that “the extraordinary rise in the Government bond market . . . constitutes the most gracious invitation that the Treasury has received from the market to borrow at long-term since the war.”

A 32-Year Bond
On January 29, 1958, Treasury officials announced a triple-option exchange offering for $16.8 billion of maturing and soon-to-mature debt. Investors were given a choice of a 1-year certificate, a 6-year bond, and a 32-year bond.

Officials conceded that, with a 3½ percent coupon rate and a price of par, the 32-year bonds were cheap compared with bonds in the secondary market. They defended the rate as necessary to attract what they hoped would be more than $1 billion of subscriptions. The Times noted that the “generous terms” had sparked “speculative interest . . . on a scale unmatched since the war” and reported that bond dealers were projecting as much as $2 billion in tenders for the 32-year bonds.

Following the close of the subscription books on February 5, Treasury officials announced that investors had opted for $9.8 billion of the certificates, $3.8 billion of the 6-year bonds, and $1.7 billion of the 32-year bonds. About $1.5 billion of the issues eligible for exchange were held for cash redemption. Officials characterized the offering as “highly successful.”

The Need for a New Approach
In the wake of the successful offering of 32-year bonds, Treasury officials continued to pursue their objective of lengthening the maturity structure of the debt, selling four more bonds over the next two years, including


In spite of the stepped-up issuance, the average maturity of marketable debt fell, from 4¾ years in mid-1957 to 4⅓ years in mid-1960. Officials realized that they had to find a new approach if they were going to succeed in stabilizing, and ultimately extending, the maturity structure of the debt.

Advance Refundings
An “advance refunding” is an offer to exchange debt that is not close to maturity for longer-term debt. Advance refundings were introduced in 1960 to get around two problems associated with conventional exchange offers: most holders of maturing securities were unlikely to want to exchange their securities for new issues of longer-term debt, and the transfer of exchange-eligible securities from holders that wanted cash to investors that wanted a new issue was complicated and costly. Advance refundings provided a way for investors with intermediate-term horizons to keep invested in intermediate-term debt, and for investors with long-term horizons to keep invested in long-term debt, without engaging in secondary market transactions. And if an advance refunding failed to attract much interest, the adverse consequences were minimal: the Treasury would get at least one more “bite of the apple” when the securities sought for exchange had to be refinanced at maturity.

The Treasury announced the first senior advance refunding on September 9, 1960, a three-part, par-for-par offering of


Officials hoped to issue between $3 billion and $5 billion of new bonds.

Following the close of the subscription books, the Treasury announced that it had received subscriptions for $4 billion of new bonds, including $2.3 billion of the 38-year bond. All of the tenders were filled. Officials pronounced themselves pleased with the results.

In a speech on November 19, 1964, Robert Roosa, the Under Secretary of the Treasury for Monetary Affairs, explained why advance refundings were so attractive to Treasury officials:

The Treasury has complete initiative with respect to timing and amounts. Instead of being bound to act on a maturity date established many years earlier, the Treasury can choose when to enter the market, in the light of prevailing market conditions—accomplishing more, disturbing less.

Moreover, should the response be comparatively poor—either because new events intervened while the books were open or because the design of the offering was not adequately attractive—the Treasury suffers no significant consequences. It still will have other opportunities to handle the remaining holdings of securities eligible for the advance exchange, and there will be no impact at all upon its cash position. Low response to a refunding of actually matured issues, on the other hand, raises innuendoes of ‘failure’ and leads to a possible short-fall of cash as the Treasury pays out heavy amounts for redemptions.

The 4¼ Percent Ceiling and the Fate of Maturity Extension
Bond issuance in general, and advance refundings in particular, came to a halt in mid-1965 when bond yields in the secondary market rose above a 4¼ percent statutory ceiling on primary market offerings that had been in place since 1918. Following the cessation of bond issuance, the average maturity of marketable Treasury debt declined from 5⅓ years in mid-1965 to 2⅔ years in mid-1975, as shown in the chart below. Congress attempted to ameliorate the damage—the Act of June 30, 1967, increased the maximum maturity of a note from five years to seven years (notes were not subject to the rate ceiling) and the Act of March 17, 1971, authorized Treasury officials to issue up to $10 billion of bonds with interest rates in excess of 4¼ percent—but the results were hardly visible. 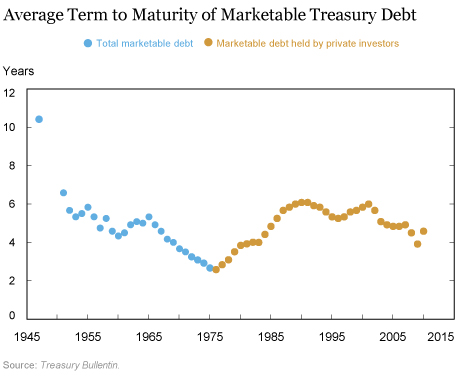 Treasury officials were able to increase average maturity from the low of 2⅔ years in mid-1975 to 6 years in 1989 without issuing any bonds longer than thirty years. They relied on two key innovations in Treasury debt management: auction offerings of coupon-bearing debt and regular and predictable issuance of that debt. Bond auctions allowed officials to issue at market prices, facilitating larger offerings and limiting the twin risks of a failed offering and undesirable speculative participation. Regular and predictable issuance allowed long-term investors to plan their investments in light of the Treasury’s likely future offerings and thereby gave the Treasury access to more funds. The ability to sell a lot more long-term debt on a regular basis was more important than the ability to sell really long-term bonds on a sporadic basis.


 Kenneth D. Garbade is a senior vice president in the Federal Reserve Bank of New York’s Research and Statistics Group.