Historical Echoes: The Legacy of Freedman’s Savings and Trust 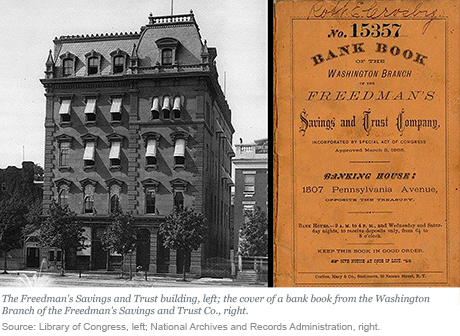 Freedman’s Savings and Trust Company, often referred to as the Freedman’s Bank, was created specifically for former slaves and African-American soldiers. It was established by legislation signed by Abraham Lincoln on March 3, 1865, only weeks before his assassination. Groundwork for the bank was laid during a meeting in January of that year by abolitionist preacher John Alvord, who met with a number of others to discuss the possibility of founding a system to assist freed African-Americans in their savings, financial development, and integration into American economic society. In the ten years of its existence, the Freedman’s Bank brought hope and then heartbreak to the African-American community.

Freedman’s Bank was modeled on the ideas and smaller financial institutions developed by military commanders during the Civil War to secure the deposits of their black soldiers and countrymen. At its peak in the early 1870s, the bank held almost $4 million in deposits (in 2016 dollars, almost eighteen times that); when it failed, many account holders were left with nothing except a strong distrust of banks and government.

Originally headquartered in New York City, about fifty men, all white, served as the board of trustees for the Freedman’s Bank. At the helm was Henry Cooke, brother of Jay Cooke, the major railroad investor who helped to fund the Union war effort. Materials for the bank emphasized its trustworthiness and Congressional oversight, including commentary “on temperance, frugality, economy, chastity, the virtues of thrift & savings.” These effective campaigns garnered hundreds of deposits from black soldiers, families, businesses, churches, and charitable organizations, as well as a small number of nonblack immigrants and their families. Meant to serve as a permanent depository institution for vulnerable communities, the bank’s original charter allowed only for relatively low-risk investments and no loans in order to offer security, stability, and economic growth to its account holders.

In 1867, the decision was made to move the bank’s headquarters from New York to Washington, D.C., into a newly constructed brownstone building that cost more than $4 million in today’s dollars. At that time the bank had twenty branches, mostly located in Southern states where freed blacks lived and worked; as many as thirty-one had been opened by the early 1870s. Although the bank had originally been subject to strict regulation, the newer, more politically savvy trustees convinced Congress to modify its charter to allow loans and higher-risk investments such as real estate. Many of these investments failed and the bank became increasingly unstable.

In the spring of 1873, events were set in motion, including the crash of the Vienna Stock Exchange, which would precede a worldwide financial crisis. This was especially true in the United States, where years of post-war expansion were followed by an economic downturn so drastic that it closed the New York Stock Exchange for several days in the fall. Jay Cooke & Company declared bankruptcy and several other banks followed suit in failure. This quick and drastic sequence of breakdowns led to the beginning of the end for the Freedman’s Bank, as a series of bank runs and a complete lack of support—the Bank was not, despite all implications, secured by the federal government—meant that it simply could no longer keep itself afloat.

Even the influence of new bank president, Frederick Douglass, was not enough to compensate for its struggles, which Douglass likened to being “married to a corpse.” In addition to the expense of the new headquarters, the Panic of 1873, and the risk of its investments, many of the bank’s branches were located in rural areas of the South. This left them little to no hope of being able to do enough business to sustain themselves, and so these branches required constant influxes of assistance. Depositors and their family members worked for decades in hopes of recovering even a fraction of their account balances, but many were left with nothing, causing a huge rift in the economic prosperity of African-Americans. After struggling to keep Freedman’s afloat for several months, even using his own money, Douglass announced the bank’s failure in June of 1874. In a published statement, he revealed to account holders that a bank examination had been conducted that exposed a number of weaknesses in the corporate structure and investing decisions made by its administration.

Although the Freedman’s Savings and Trust Company failed, its records have proven priceless to the family members of its account holders—predominantly emancipated slaves, as expected, but also a small percentage of European immigrants. The data collected, in many cases, included the individual’s birthplace, residence, age, employer, names of family members, and even whether or not the account holder was light- or dark-skinned. Some records contain the name of the emancipated slave’s former owner and the name of the plantation on which they worked. These records exist for the vast majority of Freedman’s branches and can be found in paper, microfilm, and digital formats at the National Archives and through genealogical websites. In 2001, the Church of Jesus Christ of Latter-day Saints announced that it had digitized depositor records from twenty-nine branches and these records are available to the public online.

In 1899, the Freedman’s Bank headquarters was demolished, at the time referred to as the “monument of a crime.” Today, the location is home to the Treasury Annex building, which in 2016 was renamed the Freedman’s Building in honor of not only the bank itself, but the generations and communities of former slaves who supported it.

Jay Sager is an associate archivist in the Federal Reserve Bank of New York’s Research and Statistics Group.