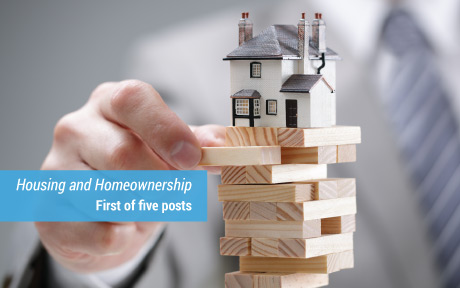 The key role of household leverage in financial stability and economic growth makes it important to track how leverage is evolving. In our paper on housing leverage, we construct a unique data set and use it to calculate household leverage from 2005 to 2016. Our main data source is Equifax’s Credit Risk Insight Servicing McDash (CRISM), a combination of data on first-lien residential mortgages from Black Knight Analytics (McDash) and matching credit bureau data from Equifax on mortgages and other liens (such as home equity lines of credit and home equity loans). We use weights to ensure that these data match the totals and distributions shown in the nationally representative Consumer Credit Panel. After accounting for the fact that some borrowers have multiple properties, we produce an estimate of the total secured debt on each property.

The chart below provides a summary of our results. At each point in time, the colors indicate the distribution of leverage (as measured by the CLTV) for mortgaged properties. (The chart is balance weighted, so it’s best to think of it as representing the share of dollars owed). We can clearly see the effects of the recent large housing market cycle in these data. In early 2005, for example, the light blue area indicates that almost 50 percent of mortgage dollars were secured by a property with a CLTV under 60 percent (that is, the total housing debt owed was less than 60 percent of the value of the property securing it). By the same token, the dark blue and gold areas suggest that only a very small proportion of mortgages were “underwater”—that is, characterized by a leverage ratio above 100 percent. 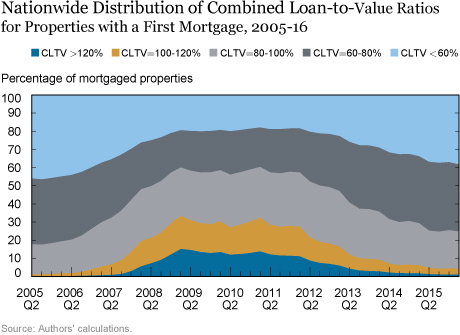 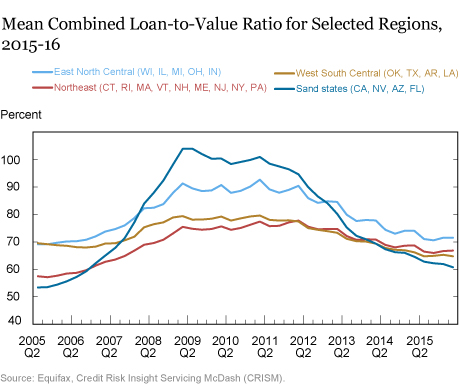 Stress Tests for the Household Sector

In the final part of our paper, we conduct “stress tests” of the household sector. Like the Dodd-Frank Act stress tests (DFAST) and the stress tests conducted as part of the Comprehensive Capital Analysis and Review (CCAR), our tests assess the resiliency of a given set of loans under adverse economic scenarios. Our object, however, is to test the resiliency of residential mortgages, rather than the resiliency of particular financial institutions. 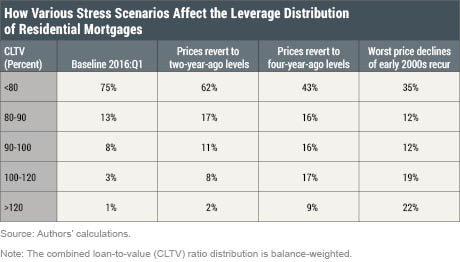 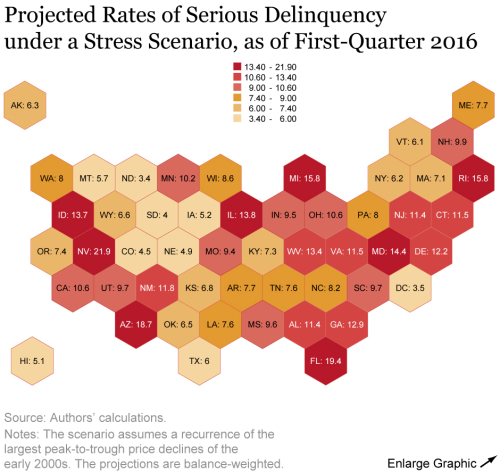 Housing is in a bubble and the bubble is bursting, we see signs of this bursting bubble in the high end markets of London, NY, Hamptons, San Fran and etc. This housing bubble burst will be worse than 2007/8 and along with a significant drop in the Global equity markets, worse than 2007/8, houses will be selling at very deep discounts, one may be able to buy on cents on the dollar, in some areas. As an aside, Deflation is taking hold and Deflation will take its tolls on Debt and Housing.