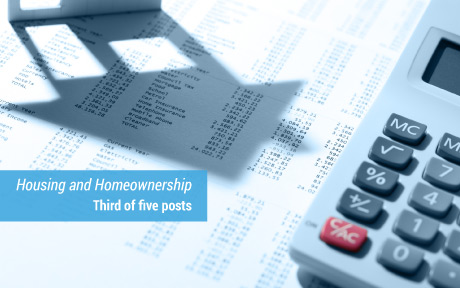 The blue line in the chart below shows total owner’s equity in real estate from the Flow of Funds—this is the same series as in our previous post. It shows a dramatic rebound in aggregate home equity over the last several years. The red line shows the combination of two ways that households can withdraw equity—assuming they have some—without selling the house: they can originate a junior lien against the property or they can refinance using a cash-out refinancing of an existing first-lien mortgage. The series in the chart, which we have shown in an earlier post on household debt, captures both of these, while excluding the equity withdrawal associated with selling a home. 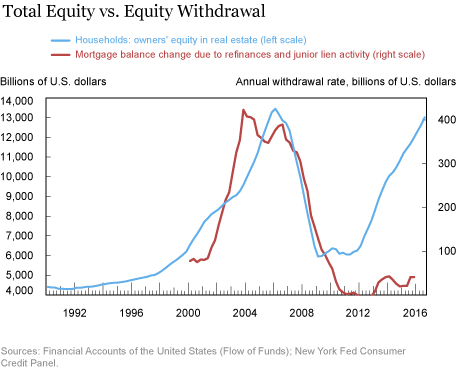 The first observation that’s striking about the chart is the dramatic change in borrower behavior with respect to home equity. During the boom between 2000 and 2006, household equity and its extraction were both rising rapidly. From 2003 to 2007, homeowners were extracting more than $350 billion per year, resources that were available for use in a variety of purposes from home improvement to consumption.

The second major point of the chart is the effect of the housing and financial crises. Beginning in 2008, equity extraction began to decline quickly and was hovering around zero by 2010, where it remained through 2012. The virtual elimination of equity withdrawal was a big contributor to the household deleveraging that ultimately shaved more than $1.5 trillion from household debt. It also likely contributed to the sharp decline of consumption during the Great Recession and its subsequent sluggish recovery.

A third notable feature of the chart is that the current house-price rally (prices are now up about 40 percent from their 2012 trough, according to CoreLogic) has not been accompanied by anything like the same level of equity withdrawal as the previous boom. In fact, withdrawal has remained well south of $50 billion, even as aggregate equity has approached its 2005 peak.

What is the source of this change in the way Americans leverage their main kind of wealth? Several explanations suggest themselves. First, it could be that the demand for equity withdrawal has fallen as the demographics of equity holders have shifted. In our prior post in this series, we showed that equity has shifted from younger, lower-credit-score borrowers to older, higher-credit-score borrowers. The table below shows that “tappable” equity, defined as equity available if lenders won’t offer a combined loan-to-value ratio (CLTV) higher than 80 percent, has changed in a similar way to overall owner’s equity. 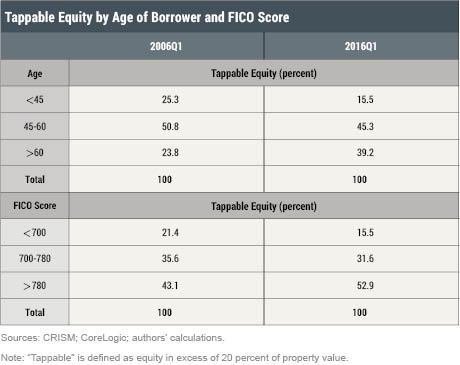 Older and more creditworthy borrowers are, of course, likely to have a lower appetite for equity withdrawal, as their demand for credit in all forms is lower. To quantify this, we rely on the New York Fed Consumer Credit Panel and a method for identifying equity withdrawal proposed by Neil Bhutta and Benjamin Keys in a recent paper in the American&nbspEconomic&nbspReview. This method enables us to measure, for borrowers with mortgage debt in a given year, whether they extract equity ($5,000 or more) over the course of the following year—excluding borrowers who move or those who appear to be real estate investors.

The chart below shows that the propensity to extract equity during 2004-05 (the blue dots) was highest for young, lower-credit-score borrowers. Thus, the fact that there are now more older, higher-credit-score borrowers can by itself explain some of the reduction in equity withdrawal, even if each “household type” was still behaving in the same way as during the boom. Our calculations suggest, however, that this shift in borrower characteristics could only explain about one-third of the aggregate decline in equity extraction propensities between the 2004-05 and 2014-15 periods.

Instead, the more important driver of the decline is that, conditional on household characteristics, equity extraction propensities were substantially lower in 2014-15—this is shown by the red dots. Comparing the red dots to the blue dots shows that this decline is particularly large for the relatively lower-credit-score and younger borrowers; meanwhile, the most creditworthy borrowers have not seen all that much of a decline in their annual equity extraction propensities. 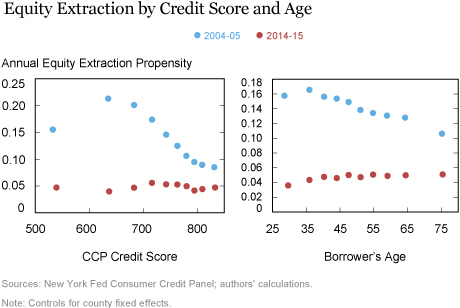 The strong decline in equity extraction among less creditworthy borrowers is consistent with the view that tighter credit supply than during the boom years is a main explanation behind the modest equity extraction in recent years. Although standards for mortgage lending have remained quite strict since the crisis (see pages 6 and 7 of the Center for Microeconomic Data’s Quarterly Report on Household Debt and Credit), they have been even tighter for home equity lines of credit (HELOCs) which are a major way that households can extract equity. By now, the average credit score for a new HELOC borrower is over 780, even higher than for first-liens (originations of closed-end second liens have almost disappeared). Similarly, cash-out refinancings are generally not available with a CLTV above 80 for conventional loans, or 85 for Federal Housing Administration loans; this is radically different from the housing-boom period, when in the subprime/Alt-A segment of the market about 40&nbsppercent of cash-out refis were originated with CLTVs above 80.

Of course, another explanation could be that people simply don’t want to extract more home equity. However, our SCE Credit Access Survey suggests that there is substantial unfulfilled demand for credit. Here we see persistent evidence of high rejection rates, and high rates of discouragement among lower-credit-score homeowners who would like to originate a new mortgage loan.

Taken together, this evidence suggests that the change in the composition of borrowers who own home equity along with a tighter credit supply are main drivers for the relatively low equity withdrawal in recent years. While this has likely slowed down consumer spending somewhat, the upside is that household balance sheets are unusually strong for an expansion approaching its eighth birthday. This, as New York Fed President Dudley recently remarked, is a positive sign for the resilience of the household sector and thus for the economy and financial stability going forward.