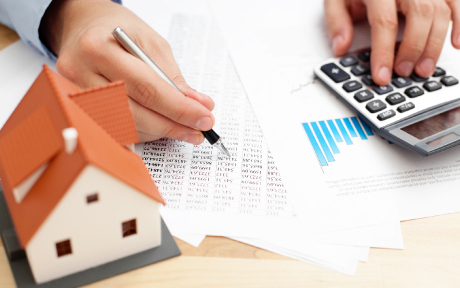 Who Pays for Insurance under the FHA’s Current Pricing?

The first step in the analysis is to estimate the timing of defaults and prepayments for FHA-insured mortgages. We use data for all FHA-insured, thirty-year fixed-rate mortgages originated between 2000 and 2007 in the Lender Processing Services (LPS) data. We define default as being when a loan reaches 120 days or more past due. Since our data only run through 2016, we calculate the timing of default and prepayment over a ten-year horizon after a mortgage is originated. The chart below shows the probability that a borrower either defaults or prepays at each duration given that the mortgage is still active the month before—what are known as the default and prepayment hazards. 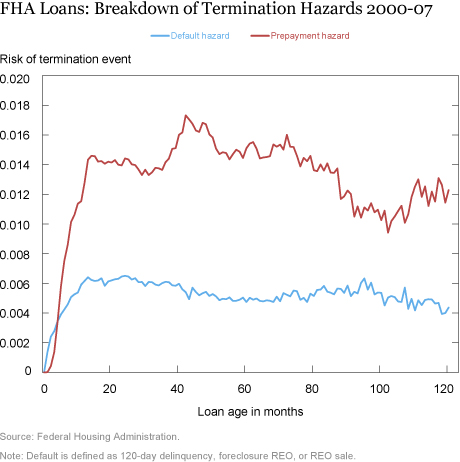 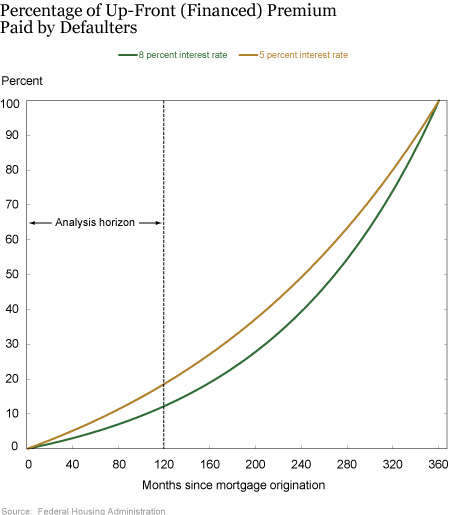 We now explore the implications of changes to the design of the FHA mortgage insurance premium pricing for affordability and the share of premiums paid for by defaulters. For each pricing choice considered, we impose the constraint that it generates the same expected total premiums as the FHA’s current pricing scheme. To evaluate the effects on affordability, we consider a $100,000 home purchase financed with a 3.5 percent down payment plus a thirty-year fixed-rate mortgage with a 5 percent coupon rate. We also assume that default and prepayment behavior is not affected by the pricing changes. 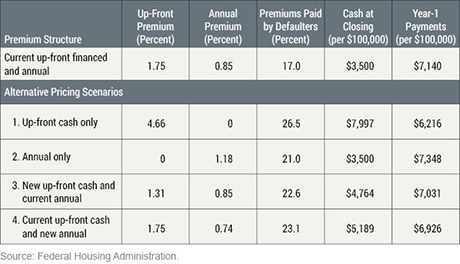 What about the idea of either a “step down” or gradually diminishing annual premium? If risks of default tend to be concentrated in a mortgage’s early years, it might make more sense to start premiums from a “high” rate and lower costs as risks decline. With the FHA program as important is it is in today’s tight lending climate, perhaps a stepped premium structure might be changed to 1.5 percent (or less) up front, then 1.25 percent for years 1-3, 1 percent for years 4-6, 0.6 for years 7-9, 0.25 percent for years 10-12 then automatically canceling (or similar structure, stepped over time)? Alternately, a more fluid diminishment could be considered where the percentage amount of each premium is fractionally reduced with each payment (i.e. in the first payment, an annualized fee of 1.25 percent (0.10416), a annualized fee of 1.24 percent (.10333) used for payment 2, etc. and structured so as to terminate at a point where the incidence or severity of loss to the MIF is minimal. Either way could be structured so that the percentage of possible lifetime premiums paid (versus today’s structure) could be advanced into a period earlier in the term of the underlying mortgage when losses are more likely to occur. Borrowers would be rewarded for staying in the program for longer, as costs would diminish over time, then terminate.