« Money Market Funds and the New SEC Regulation | Main | From the Vault: Factor This In » 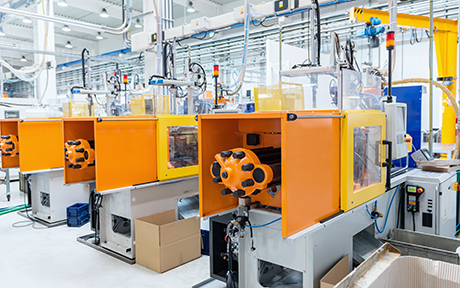 Why have interest rates stayed low for so long after the financial crisis—and will they remain low for the foreseeable future? One way to answer these questions is to use the accounting identity that global saving must equal physical investment spending and argue that low rates have been necessary to prop up investment spending enough to match saving. From this perspective, the extent of any recovery in interest rates depends on whether weak investment spending is driven primarily by secular demographic trends that are a long-term drag on aggregate demand or by the residual effects of the financial crisis.

As a matter of accounting, the world’s income is allocated to either consumption or saving while spending goes to either consumption or investment—that is, money spent replacing or adding to the world’s physical capital stock. With global income always equal to spending, the two accounting identities, taken together, imply that the world’s gross saving (household, business, government) must always equal its gross investment spending.

At the national level, however, saving does not have to equal investment spending, leading to global imbalances—net saving surpluses and deficits—that add up to zero across countries. Some countries, like China and Japan, save more than they need to fund investment spending, sending their surplus saving abroad. Other countries, like the United States, have net saving deficits and borrow from countries such as China.

Global saving and investment patterns were central to the saving glut idea proposed by Ben Bernanke in 2005 to explain the forces behind the increase in U.S. borrowing from the rest of the world. Bernanke argued that the large net saving surpluses that had accumulated in East Asia (after the region’s 1997 financial crisis depressed local investment spending) and in oil-exporting countries (after a significant rise in oil prices boosted their saving) had created a global saving glut. This vast pool of saving had to go somewhere and it ended up in the United States, where, by lowering interest rates, it boosted U.S. investment spending enough to absorb the foreign saving surplus. Bernanke expanded on the idea in 2007, using the global saving glut to explain why U.S. long-term rates stayed low despite tighter monetary policy.

The Investment Slump in Advanced Economies 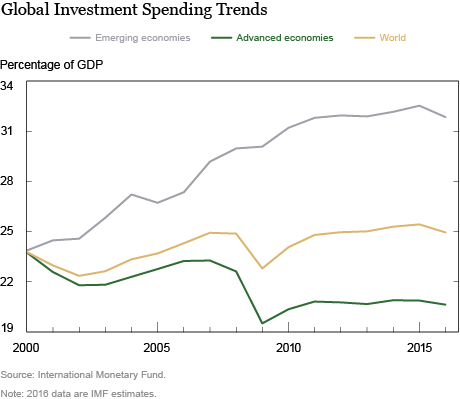 The next chart shows that this funk in investment spending in advanced countries was broad-based, with Japan, the European Union, and the United States all spending below their 2000–05 average rates. The United States experienced the biggest decline of the three regions during the financial crisis and the recovery has so far left the investment-to-GDP ratio more than 3 percentage points below its 2000–05 average. The European Union and Japan have both experienced a 2-percentage-point decline in investment as a share of GDP over the same time period. 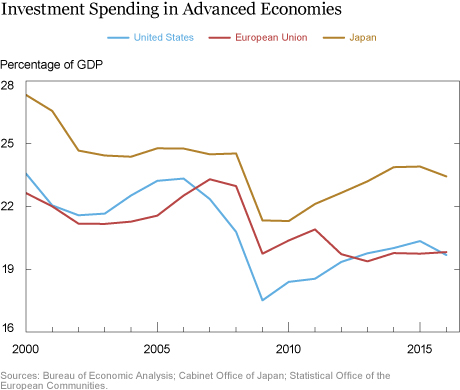 This phenomenon of low investment spending despite very low interest rates has generated a spirited debate over possible explanations. One possibility is that slower population growth, coupled with an aging workforce in the advanced economies, is lowering global potential growth. As a consequence, investment spending is primarily being held down by reductions in expected output growth and in the demand for housing. According to United Nations forecasts, population growth in the set of advanced economies will downshift from an annual rate of 0.6 percent over 2000–05 to a 0.4 percent rate over the next five years. In addition, the populations of these countries are aging, with the share over 65 increasing from 14.1 percent in 2005 to 16.3 in 2015 and projected to rise to 17.9 percent in 2020.

An alternative view is that the global financial crisis has left firms, households, and governments less willing or able to borrow than they previously were. This cyclical explanation would point to a recovery in investment ahead as these restraining forces wear off, while the secular demographic explanation suggests interest rates will remain under pressure over the long term in order to keep investment spending high enough to match global saving. 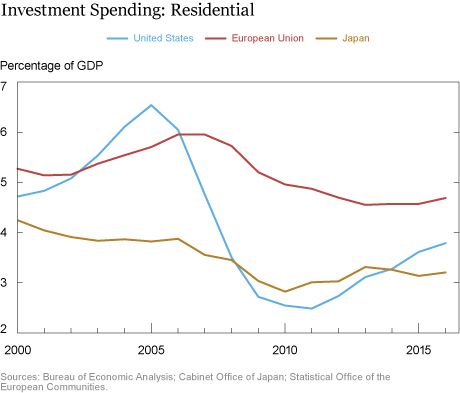 The final chart shows that drop in nonresidential investment spending as a share of GDP. Businesses are not adding equipment and machinery to either replace or expand their capital stock to the same extent as they did before the crisis. 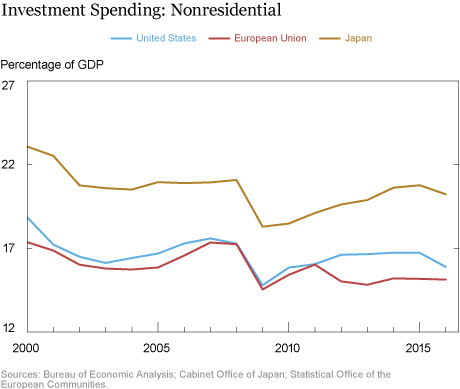 What is driving the current low-interest-rate environment is a difficult issue to resolve. Rates have recovered from the mid-2016 trough and may well rise in the near term. Unfortunately, such a development is unlikely to end the debate over the relative importance of secular versus cyclical factors. That is, higher interest rates would suggest firms, households, and governments have become more willing and able to take on debt as memories of the global financial crisis fade, but higher rates would not mean that they are not still under downward pressure as a consequence of demographic trends.

Note: Today’s blog post is the first of a planned series of entries that will run intermittently throughout the year. This occasional series will highlight ongoing analysis from New York Fed staff on the possible factors behind, and implications of, the low-interest-rate environment experienced in the United States and many other areas of the world over the past several years.

The effects of higher taxation at all levels, along with increased health insurance deductibles and premiums should be looked into as further additional factors limiting spending and therefore preventing full normalization of interest rates.

Low interest rates are a blunt instrument. They may help support an increase in capital spending temporarily, but will likely cause problems elsewhere – for example, bubbles in the stock market and real estate assets to name two. I believe that low interest rates have contributed to the amplified boom-and-bust cycles in the domestic oil & gas market. At best, extremely low interest rates are a temporary solution that will cause problems in other sectors of the economy if the underlying (structural) causes of weak capital spending are not identified and addressed. Without a determined comprehensive approach to address the structural problems of weak capital spending – some of which you have identified in your article – a policy of extremely low interest rates is bound to postpone the inevitable economic downturn and probably make it worse than it otherwise might have been.

Let’s assume for a moment that, because of the increased demand for deposit alternatives created by the savings glut, pre-crisis investment spending in the US was both higher and tilted toward those investments which can be used to create deposit alternatives with the shortest collateral chains – primarily real estate, particularly residential real estate. The implication is that decreased residential spending SHOULD account for more of the drop (50%) than it’s pre-crisis percentage of investment outlays (25%). It also implies that over time we should see most of the investment slack taken up by non-residential investment.

…as well as one of household debt-to-income!

Amazing that you could write this entire article without including a long-term chart of soaring household debt to GDP. This demonstrates everything wrong with central bank thinking and lack of common sense.