« At the N.Y. Fed: Press Briefing on Household Borrowing with Close-Up on Student Debt | Main | How Do People Find Jobs? » 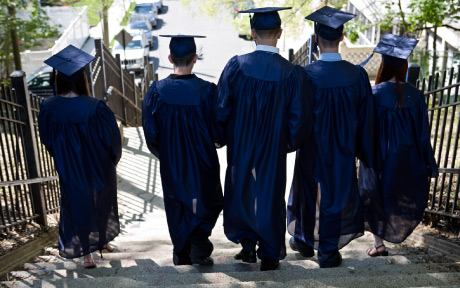 Previous work has documented that student debt holders endured a sharper decline in homeownership during the recession (relative to those who did not hold student debt), and that a college education is associated with a higher probability of becoming a homeowner. But there is significant heterogeneity among those who go to college and across the type of colleges students attend, and past research has not been able to disentangle how different types of educational attainment and student debt interact to impact the likelihood of owning a home. In this blog post, we begin to close that gap, merging two unique data sets to address the following questions:


We shed light on these questions using a rich data set that matches the New York Fed Consumer Credit Panel (CCP), based on Equifax data, to National Student Clearinghouse (NSC) education data, allowing us to track student debt and educational attainment over time for a representative sample of young adults. Because we observe not only whether an individual owes student debt and has attended college, but also graduation status, level of degree obtained, and homeownership status, we are able to further disentangle the relationship between different education levels and homeownership. Throughout this discussion, it is important to note that our analysis is descriptive and, while suggestive, the statistical associations shown do not necessarily imply causation; at least part of what we uncover could result from differences in the kinds of people who choose to attend college.

We focus on individuals born between 1980 and 1986 and track their college attendance and homeownership rate by age. In our analysis, we measure college attendance by entry into higher education by age twenty-six and define student borrowers as those having any student debt at any point between ages twenty-seven and thirty. Homeownership is defined as having a mortgage at any time prior to age thirty.

We can go beyond earlier analysis by differentiating college attendees by degree program entered and debt status. We distinguish between (1) associate degree programs and (2) bachelor’s and post-bachelor’s degree programs, which we label “bachelor’s-plus.” By age twenty-six, both groups of college attendees have higher homeownership rates than non-attendees do, regardless of debt status—a homeownership gap that grows steadily with age. Reflecting their earlier entry into the workforce, the homeownership rate of associate degree students is initially higher than that of bachelor’s-plus students. From age twenty-five on, bachelor’s-plus students own homes at a higher level than associate degree students, regardless of debt status, with the gap between degree types widening with age.

At any given age, holding debt is associated with a lower rate of homeownership, irrespective of degree type. While the homeownership gap between debt-holding and non-debt-holding bachelor’s-plus students remains relatively constant, that for associate degree students expands with age. Associate degree students who take on debt buy homes at almost the same rate as those who never went to college until they reach age twenty-five, when their homeownership rate rises above that of those who never went to college. At age thirty-three, the non-college-goers are almost 4 percentage points behind their peers who enrolled in associate degree programs and took on student debt, while lagging behind debt-free bachelor’s-plus students by 25 percentage points. 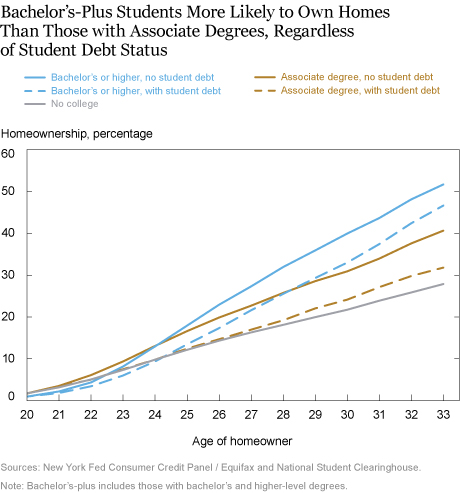 The figure below distinguishes college attendees not only by student debt status, but also by graduation status. Graduation, measured by highest degree attained, is associated with markedly higher homeownership rates, irrespective of debt status. Among both graduates and non-graduates, those with student debt are again less likely to be homeowners. While initially indistinguishable, by age thirty-three the homeownership rate for those who did not attend college is about two years behind that of those who attended college with debt but did not graduate.

These general patterns persist when we further segment college attendees by degree type (see slide 42 of our slide deck). For any given degree type and debt-holding status, graduation is associated with having a higher homeownership rate while debt holding is associated with lower homeownership. Interestingly, we find that those who enter associate programs, take on debt, and do not graduate own homes at a slightly lower rate than those who do not go to college up to age thirty, after which the two rates converge. 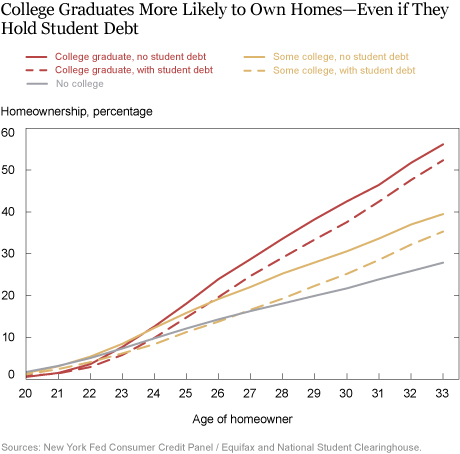 We next examine whether the amount of student debt, measured as the maximum level of student debt incurred by age thirty, is related to homeownership. The chart below shows that those holding more than $25,000 of debt (a value between the average and median debt levels observed among borrowers) are generally less likely to own homes than those with smaller amounts of debt. Because the amount of student debt held is somewhat correlated with degree program, with those entering bachelor’s and post-graduate programs typically incurring larger debts, the patterns shown – larger debt balances associated with lower homeownership rates – are likely to somewhat understate the importance of the amount of debt. 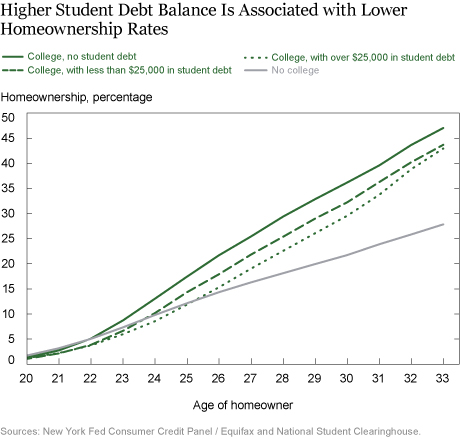 One might expect those from wealthier areas, who presumably have greater financial resources, to own homes at a higher rate. However, we find that homeownership rates among college attendees are quite similar for both income groups. Thus, in terms of homeownership, college appears to be effective in “leveling the playing field” across students from different socioeconomic backgrounds (insofar as young adult neighborhood income captures socioeconomic backgrounds).

Of course, these comparable homeownership rates do not necessarily mean that individuals in each group own similar homes, put up similar down payments, or take out similar-sized mortgages. Indeed, a closer look at the mortgage balances of these groups reveals that the average mortgage balance at age thirty for college attendees from lower-income areas is approximately $150,000, compared to around $200,000 for those from higher-income areas. For non-college-goers, mortgage balances average $131,000 among those from lower-income areas and $191,000 among those from higher-income areas. Such differences likely reflect different location choices combined with differences in local home prices. Our slide deck contains much more detail on the relationship between homeownership, student debt, and education, including homeownership rates for the above groups over time. While our analysis highlights the complex interactions between educational attainment, debt, and homeownership, there are some overarching themes to take away. Homeownership is positively associated with educational attainment—in terms of both degrees pursued and degrees completed. This finding underscores the critical importance of making college financially accessible. While going to college without debt is ideal, doing so is often a financial impossibility. Given a rising reliance on student debt for financing and gaining access to higher education, our findings highlight the increased importance of federal grant and loan programs.

In addition, our analysis shows that for any given level of educational attainment, those with student debt are less likely to own a home in their early thirties than those who completed their education without taking on as much—or any—debt. To the extent that the statistical associations we uncovered reflect a causal impact of debt on homeownership, they have important implications for the housing market and future spending behavior. Homeownership represents an important means of wealth accumulation, with housing equity being the principal form of wealth for most households. So, changes in the way we finance higher education, with an increased reliance on student debt, may have important implications for the housing market and the distribution of wealth. We expect to report new findings from ongoing research on this topic in the future.