The Role of Central Bank Lending Facilities in Monetary Policy

Editor’s note: This post was originally published on June 30, 2017. We are running it again today, August 14, in conjunction with a companion piece scheduled for August 16. An error in the table was corrected on July 3. Central bank lending facilities were vital during the financial crisis of 2007-08 when many banks and nonbank financial institutions turned to them to meet funding needs as private funding dried up. Since then, there has been renewed interest in the design of central bank lending facilities in the post-crisis period. In this post, we compare the Federal Reserve’s discount window with the lending facilities at three other major central banks: the Bank of England (BoE), the European Central Bank (ECB), and the Bank of Japan (BoJ). We observe that, relative to the other central banks, the Fed’s discount window is less integrated into the monetary policy framework. In a follow-up post, we will discuss differences in the central banks’ counterparty and collateral policies.

What Is a Standing Lending Facility?
We use “standing lending facility” (SLF) to refer to a facility that lends on a bilateral and on-demand basis rather than in the open market through scheduled auctions. The Fed’s discount window—namely the primary credit program—is an example of an SLF. As shown in the table below, SLFs go by different names: at the ECB, it is called the marginal lending facility and, at the BoJ, the complementary lending facility. The BoE uses two SLFs—the operational SLF (OSLF) and the discount window facility (DWF). The OSLF, which usually lends overnight, is used for monetary policy purposes, while the DWF lends on a longer-term basis and serves a financial stability purpose. We do not discuss emergency lending facilities since these only lend in crisis situations, and are typically designed as open market auction-based facilities rather than on-demand bilateral lending facilities.

While normally considered a financial stability tool, SLFs usually also serve a monetary policy role (see table). In their monetary policy role, SLFs limit upward pressure on interest rates by providing loans to individual institutions that might occasionally experience urgent funding needs. As such, SLFs may be used to set a ceiling in the interest rate corridor, as discussed below. In addition, most SLFs have a financial stability purpose, providing credit to the financial sector broadly during crises. In this post, we focus on the SLF’s role in maintaining the interest rate corridor, where there is a difference between the Fed’s discount window and the SLFs of the other central banks. 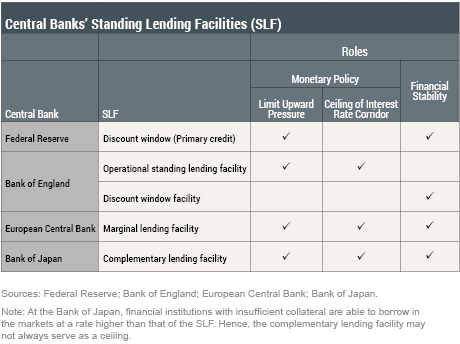 Standing Lending Facility Rates as Corridor Ceilings
Frameworks for implementing monetary policy are typically either corridor-type or floor-type systems, depending on the method used for keeping the overnight, interbank interest rate close to the central bank’s target.

In the original Federal Reserve Act of 1913, the discount window was the only monetary policy tool, but its role in monetary policy began to decline soon thereafter. From the 1920s onward, open market operations (OMOs), involving purchases and sales of securities in the open market, became the Fed’s central monetary policy tool. Since their inception, OMOs have been successful in keeping the overnight rate close to the Fed’s target, even when interbank markets were highly volatile. It is only in recent years that the Fed has begun to adopt elements of a formal corridor system (in particular, interest on reserves).

It’s More about the Floor Since the Crisis
As overnight rates have hovered close to zero since the crisis of 2007-08, all four central banks have focused more on the floor rather than the ceiling on overnight rates. The traditional interest rate corridor continues to be maintained at the three foreign central banks, though the ECB has shifted to the use of the standing deposit rate as its main policy rate. At the Fed, a new tool (overnight reverse repos) has been implemented to help support the floor for the federal funds rate, and it appears to have been effective in keeping that rate within the target range. In our next post, we compare the counterparty and collateral policies of the Fed’s discount window with those of the other three central banks’ SLFs.