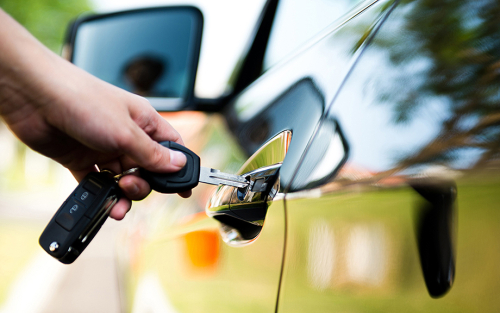 Total household debt increased by $116 billion to reach $12.96 trillion in the third quarter of 2017, according to the latest Quarterly Report on Household Debt and Credit released today by the New York Fed’s Center for Microeconomic Data. Household debt has been growing since mid-2013, boosted in part by steady growth in auto loan balances, which have grown for twenty-six consecutive quarters thanks to record-high levels of newly originated loans. Although new vehicle sales had begun to slump over the summer after several strong years of growth, September and October saw a rebound in sales, ending with over 18 million vehicles sold (seasonally adjusted at an annualized rate), and auto loan originations in the third quarter were commensurate with these numbers. In this post, we revisit the state of auto lending and auto loan performance, using the New York Fed Consumer Credit Panel which is based on Equifax credit data.

We reported one year ago that amid high levels of originations to subprime borrowers, subprime balances had been growing quickly, and these trends have mostly continued. We have noted in an earlier blog post that one feature of our data set is that it enables us to infer whether auto loans were made by a bank or credit union, or by an auto finance company (typically made through a car manufacturer or dealer using Equifax’s lender classification). Subprime auto lending has long been dominated by auto finance companies, which have historically originated and held more than 70 percent of subprime auto loans. The chart below, which depicts newly originated auto loan balances for the two lender categories by borrowers’ credit score at the time of origination, shows that these trends have continued. Lending to borrowers with lower credit scores has not increased as rapidly in the past year as it had in the preceding years, while lending to borrowers with higher credit scores has continued apace. 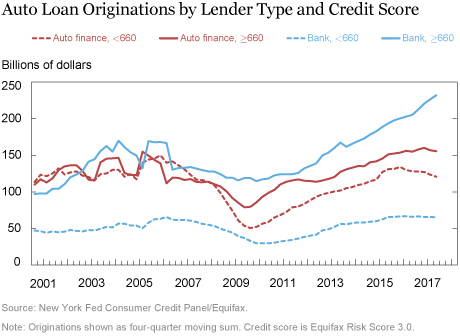 Outstanding subprime auto debt (classified in the chart below as debt held by borrowers with origination credit scores under 620) now stands at about $300 billion. Although this amount has increased steadily in absolute terms, as a share of the total outstanding auto loan balance, it has been fairly steady at around 24 percent since about 2011. Subprime loans are disproportionately originated by auto finance companies, and their share has nearly doubled since 2011 and now stands at over $200 billion—represented in dark blue on the left panel of the chart below. In comparison, the outstanding balances of bank auto loans remain dominated by loans originated to borrowers with higher credit scores, as shown in the right panel below. 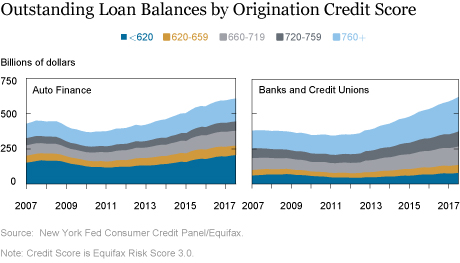 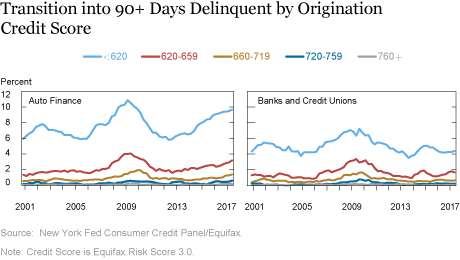 Although the impact on the larger financial sector may be muted, there are over 23 million consumers who hold subprime auto loans. These consumers may find their credit reports further damaged after a default or encounter further financial difficulties after experiencing a car repossession. This is an area of household debt we have been monitoring for some time now, and will continue to monitor.

Mary: Thanks for the comment and suggestion – we have been monitoring student and auto loans for some time but have not formally investigated the role of securitization directly. While securitization plays a role in auto loan issuance, student loans are predominantly issued (and guaranteed) by the federal government, with private loans issuance being mostly restricted to borrowers with high credit scores.

Thank you, Liberty Street, for this blog on auto loans and also on student loans. I hope you will research and write about this topic: How much is the endless gush of money created by securitization responsible for over-borrowing, and how much is it responsible for rising prices (higher college costs, higher car costs)? I’m old enough to remember the old saying, “You can’t get a bank loan unless you don’t need one.” How different things are today. Thank you. Mary