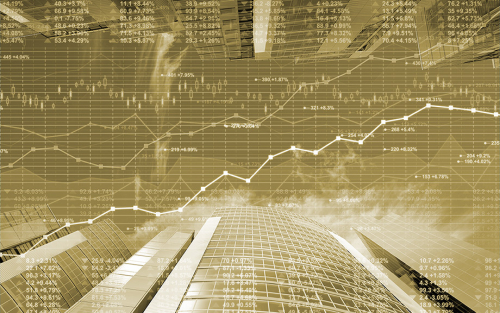 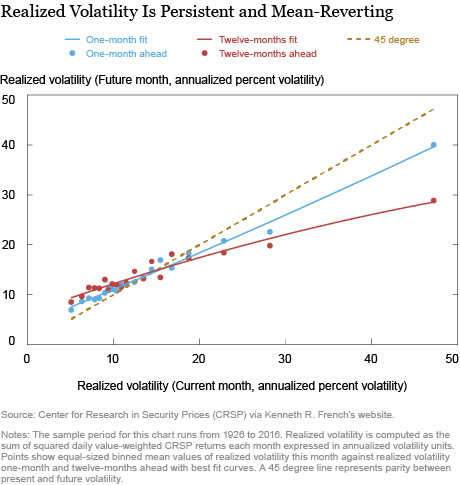 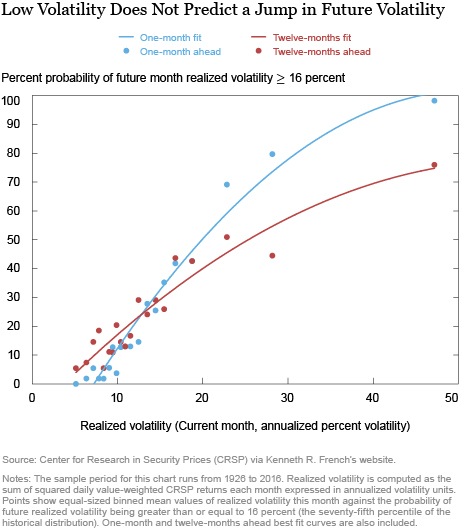 The Term Structure of Implied Volatility
As an alternative to the historical analysis, we can look at the term structure of market-implied volatility over different horizons. This measure is analogous to the VIX, but uses longer-dated options to provide information on the level of implied volatility beyond a one-month horizon (see Carr and Wu [2009] for details on methodologies). 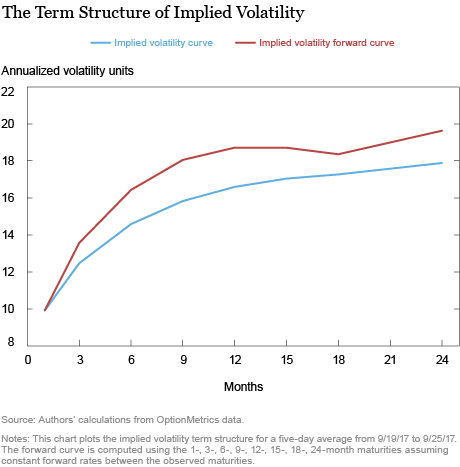 Going beyond this snapshot on a given day, it is useful to summarize the shape of the term structure over time by tracking its slope (twelve-month minus one-month implied volatility). As shown in the chart below, the slope is positive on average with a historical mean of about 1.8 percent. During periods of financial stress, the slope tends to invert and go negative. Currently, the slope is over 6 percent. This is steep both in absolute terms and in comparison with the historical average of 1.8 percent and the pre-crisis average of 1.4 percent from 2006 to 2007, which reflects how investors are pricing higher volatility in the future. Based on this evidence, it seems that, despite the low level of the VIX, investors may not be so complacent after all. 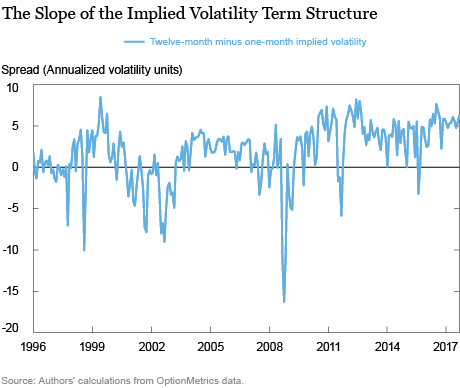 The volatility risk premium can be interpreted as the time-varying expected return from selling volatility insurance by receiving the fixed leg in variance swaps over different horizons. Our previous post noted that the one-month volatility risk premium has compressed in recent months, which might be interpreted as a sign of investor complacency. In particular, the low level of volatility may be encouraging investors to increase leverage, which can push asset prices up and risk premia down, thereby increasing systemic risk (for example, see Brunnermeier and Sannikov [2014] and Adrian and Shin [2013]).

The term structure of risk premia, however, appears to provide evidence against the complacency story, consistent with results from the term structure of implied volatility. The chart below reports the one-month and twelve-month volatility risk premiums in the estimated model. The twelve-month risk premium has averaged 1.5 percent in 2017, which is the twenty-sixth percentile of its historical distribution. In contrast, the one-month risk premium has averaged 0.67 percent in 2017, or the eighth percentile of its historical distribution. The higher risk premium at the long- versus short-end of the term structure provides further evidence that investors are demanding compensation for bearing long-dated volatility risk. 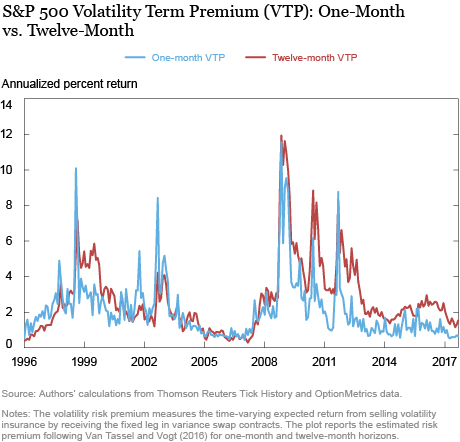 Is This Time Different?
What’s perhaps most striking about the preceding chart is the different behavior of long-dated risk premia in recent years versus the pre-crisis period in the mid-2000s. As the plot indicates, volatility risk premia were compressed across the curve in the period leading up to the financial crisis, consistent with the complacency story. In contrast, there is currently a larger wedge between short-dated and long-dated risk premia, suggesting that investors may understand that volatility may increase again in the future.

Of course, this is not to say that there are no risks or reasons for concern in the current environment. One could argue that a twelve-month term premium at 1.50 percent is still low in absolute terms. Moreover, the impression that volatility is low relative to a large number of risks was the starting point for our companion post. If these risks materialize, volatility may well jump and the market could see a correction. That said, our analysis highlights how the slope of the implied volatility term structure is steep today and how the twelve-month risk premium is large relative to the pre-crisis period of the mid-2000s, suggesting there are differences in how market participants are pricing risk.