« How Much Is Priced In? Market Expectations for FOMC Rate Hikes from Different Angles | Main | The Fed’s Balance Sheet, Night Lights, and the Other Top LSE Posts of 2017 » 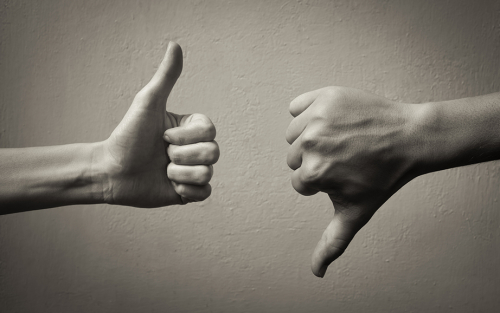 Following the 2016 presidential election, as noted on this blog and&nbspmany other outlets, Americans’ political and economic outlook changed dramatically depending on partisan affiliation. Immediately after&nbspthe election, Republicans became substantially more optimistic relative&nbspto&nbspDemocrats. In this blog post, we revisit the issue of polarization over the past twelve months using data from the New York Fed’s Survey&nbspof&nbspConsumer Expectations (SCE)—also the focus of a detailed&nbsptechnical&nbspoverview in the latest edition of the Bank’s journal, the Economic&nbspPolicy&nbspReview. The overview walks readers through the design and implementation of the survey, as well as the computation of the various statistics released by the SCE team every month.

The left panel of the figure below shows the percentage of SCE respondents who say they expect to be better off financially a year from now (note that all charts in this blog post display three-month moving averages). We split the sample into respondents in counties that voted for Donald Trump (henceforth, “Republican counties”) and those in counties that voted for Hillary Clinton (“Democratic counties”).

A similar pattern is evident in the right panel of the figure below, which&nbspshows the percentage of respondents who report being better off financially than they were a year ago. Interestingly, Republican counties see an increase in this share immediately after the election, even before any of the policies of the new administration had been implemented. Although possibly surprising, this result is consistent with respondents&nbsphaving a forward-looking understanding of their current financial&nbspsituation. Similar patterns appear in respondents’ expectations about the U.S.&nbspeconomy overall. The left and right panels of the figure below show, respectively, the average perceived likelihood that U.S. stock prices and U.S. unemployment will be higher one year later. Again, Republican counties were more pessimistic than Democratic counties in the years leading up to the election, grew relatively much more optimistic immediately after the election, and show receding optimism in the past few months. 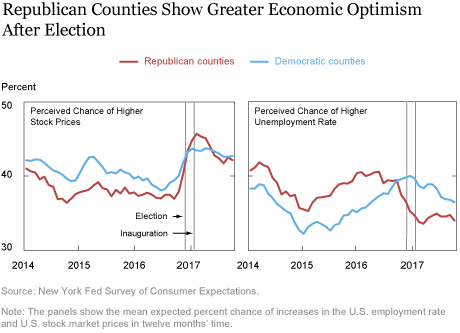 We find similar trends when we focus on government debt and tax rates, two economic variables over which the president (and government more broadly) has more direct control. We see that Republican counties anticipated larger increases in government debt prior to the election, a pattern that reversed immediately and dramatically following the election. Note, however, the large increase for both groups over the past two months, when tax reform plans were being debated in Congress. Expectations for future tax increases were not particularly polarized prior to the election, but Republican counties have, on average, expected smaller increases in taxes than Democratic counties since the election. This trend does not seem to have narrowed in the most recent months, perhaps reflecting differing expectations about the passage and potential effects of the tax reform measure. Of course, people in Republican counties differ from those in Democratic counties in many ways besides their political leaning. For example, the mean household income in Democratic counties in our sample is $78,000, compared to $61,000 in Republican counties. Education levels also differ, with 40 percent of those in Democratic counties having at least a Bachelor’s degree, versus 25 percent in Republican counties. However, an econometric analysis indicates that these differences are not sufficient to explain the trends in expectations we highlight. Even after controlling for demographic characteristics (including age, gender, income, and education), we find similar patterns of partisan polarization. So, the shifts in expectations that followed the 2016 election appear to truly reflect political polarization.

A natural question that arises is whether these changing patterns of polarization in expectations have affected consumer behavior. A recent study—“Partisan Bias, Economic Expectations, and Household Spending”—argues that the impact of the election on polarization did not have a measurable effect on consumer spending. Our own analyses of SCE and Equifax (credit report) data largely corroborate this finding; we find that the election had little partisan impact on spending patterns or a number of other behavioral outcomes.

This disconnect presents something of a puzzle. In general, subjective expectations have been found to be predictive of individual behavior, and&nbspconsumer&nbspsentiment has been found to be a leading indicator of consumer spending. So why did major partisan shifts in consumer confidence and expectations not translate into corresponding shifts in&nbspbehavior?