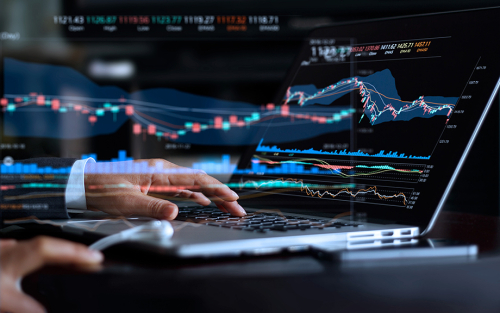 The term “reach for yield” refers to investors’ tendency to buy riskier assets in hopes of securing higher returns. Do low rates on safe assets encourage such yield-seeking behavior, particularly among U.S. prime money market funds (MMFs)? In a forthcoming paper in the Journal of Financial Economics, I develop a model of MMF competition to understand whether competitive pressure leads these funds to reach for yield in a low-rate environment like the current one. I test the model’s predictions on the 2002-08 period and show that, after controlling for changes in risk premia, declines in risk-free rates actually reduced MMF risk-taking, leading to a “reach for safety.”

Recently, there has been much debate about asset managers reaching for yield in a low risk-free-rate environment. Asset managers are typically compensated based on the volume of assets under management, and since investors positively respond to fund performance, asset managers have an incentive to compete over relative performance to attract investors. The concern—expressed, for instance, in a report from the U.S. Treasury’s Office of Financial Research—is that lower returns on safe assets might exacerbate this risk-taking incentive. U.S. prime MMFs have been seen as exemplifying this reach for yield driven by relative performance competition (as observed, for instance, in this speech by former Fed Governor Jeremy Stein). Both regulators and academics have lately paid close attention to prime MMFs because of their crucial role in the global financial crisis; however, there is a relative lack of theoretical and empirical literature on the topic.

Model Overview
In my paper, I model the MMF industry as an economy in which MMFs with different default costs compete over relative performance to attract investors. The cost of default can be thought of as the cost of "breaking the buck"—that is, an MMF having to reprice its shares below the stable net asset value of $1. The heterogeneity comes from the fact that the reputational damages caused by a fund breaking the buck—for instance, outflows from other funds managed by the same sponsor and losses in that sponsor’s franchise value—are different across fund sponsors, as argued here. When competing against one another, MMFs trade off the expected costs of default against the expected gains of outperforming their competitors (by obtaining higher returns through more risk-taking).

Predictions
The model yields predictions for how different types of MMFs respond to changes in the risk-free rate and the risk premium.

Second, and contrary to the “reach for yield” argument, a lower risk-free rate leads all funds to increase their buffer of safe assets in order to maintain their default probability at the preferred (equilibrium) level. That “reach for safety” effect, however, is stronger for funds with higher default costs, so that the risk-taking differential across funds increases as the risk-free rate decreases. In other words, low default cost funds become even riskier, in relative terms, in a low-rate environment.

Testing
I test the model’s predictions by looking at the behavior of institutional prime MMFs from January 2002 to August 2008. I choose this time frame because it includes both a significant surge in the risk premia available to MMFs (August 2007 to August 2008) and a prolonged period of low Treasury rates (January 2003 to July 2004). The chart below shows the one-month Treasury bill rate, a proxy for the risk-free rate available to MMFs, and the average spread between rates on risky securities available to MMFs (that is, certificates of deposits and AA-rated commercial paper) and the three-month Treasury bill rate; this spread index is my proxy for the risk premium available to MMFs. 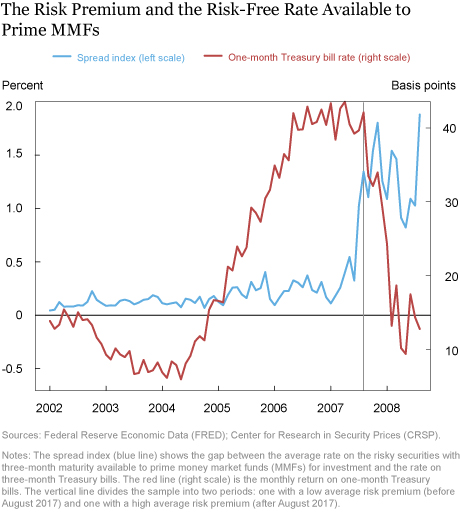 In fact, concerns about a reach for yield by MMFs and other financial intermediaries in response to low interest rates first emerged in 2003-04. I focus on institutional prime funds because there is considerable evidence that they face a stronger flow-performance relation than retail ones and are therefore more subject to the risk-taking incentives stoked by competition.

To test the first prediction on bifurcated risk-taking in response to higher risk premia, I divide funds by default costs, measured by the share of prime MMFs in the family’s total mutual fund business. This measure captures the reputational costs that a sponsor will incur if its prime MMFs fail: sponsors with relatively less prime MMF business expect to incur larger costs, in terms of negative spillovers to their other business. Consistent with my model, I find that after a 1 percent increase in the risk premium, MMF risk-taking clearly bifurcates by default costs: funds with default costs above the industry median decrease their net portfolio share of risky assets by 3.8 percentage points, while funds with default costs below the median increase it by 3.1 percentage points. This bifurcation is evident in the chart below: the average net risky investments of the two groups start to diverge dramatically after August 2007, when the risk premium available to MMFs increased sharply in response to the run on asset-backed commercial paper and the collapse of two Bear Stearns subprime hedge funds. 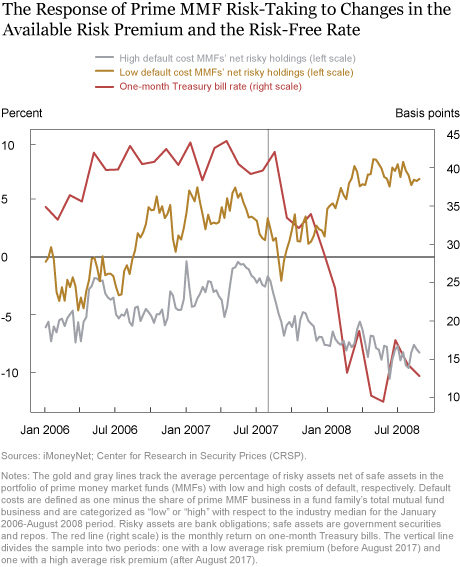 After controlling for the risk premium, consistent with the model and contrary to reach-for-yield concerns, I estimate that after a 1 percent decrease in the one-month Treasury bill rate, all funds decrease their net risky investment by roughly 25 percentage points.

Secondly, also as predicted by the model, the cross-sectional differences in risky investment increase when either risk premia rise or risk-free rates decline. For instance, a 10-basis point decline in the one-month Treasury bill rate (a little less than one standard deviation for the 2002-08 period) increases the difference in net risky investment between funds in the lowest and highest percentile of default costs by 5 percentage points. That’s a large impact, relative to an overall standard deviation of MMF net risky investment of 25 percent over the period analyzed.

Conclusion
Overall, my paper shows how a theoretical model of fund competition can help us make sense of MMF behavior in a low-rate environment and understand how their risk-taking responds to market conditions and monetary policy. In particular, the paper shows that when risk-free rates decrease, rather than reaching for yield, all funds decrease their holdings of risky assets because they need a larger buffer of safe assets to keep their default probability at the preferred (equilibrium) level. In contrast, surges in risk premia have opposite effects across funds: those with low default costs take more risk, whereas those with high default costs take less.

Gabriele La Spada is an economist in the Federal Reserve Bank of New York’s Research and Statistics Group.

Posted by Blog Author at 07:00:00 AM in Financial Institutions

Thank you very much for reading the blog and for the very interesting question. According to my model, an increase in risk-free rates and risk premia, such as the one you describe in your question, would lead prime MMFs with relatively low default costs to increase their risk taking. However, the effect on prime MMFs with high default costs would be ambiguous because the increase in risk-free rates would lead them to take more risk, but the increase in risk premia (if it reflects an increase in underlying risk, as I assume in my model) would push them to take less risk. As a consequence, the effect on the overall industry is ambiguous. It depends both on the magnitude of the risk-free rate rise relative to the surge in risk premia and on the relative size of the two groups of funds (more specifically, on the distribution of default costs in the industry). Finally, as you rightly point out, keep in mind that the current environment is very different from the one I study in my paper, especially because of the new SEC regulation of the MMF industry, which requires all prime MMFs to adopt a system of liquidity gates and redemption fees and institutional prime MMFs to move from a stable NAV to a floating NAV.

Thank you for this very interesting work. How do you think your research relates to the current situations in markets, where commercial paper rates have been accelerating, and LIBOR/OIS spreads have been widening?

I'm not quite sure I understand what your model would argue the impact would be: risk premia is rising this year from extremely compressed levels last year, risk-free rates are rising, and LIBOR/OIS rates are widening, arguing that prime MMFs are reducing risk.

I recognize there are some potential exogenous impacts from the tax reform and fiscal stimulus/t-bill supply, but just curious your opinion. Thanks!