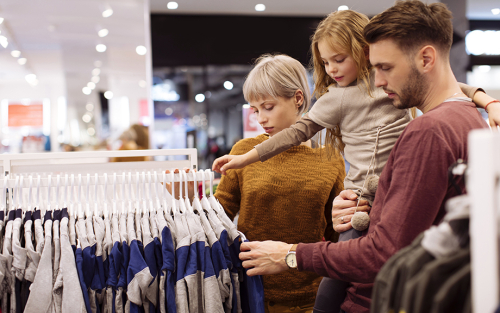 While the SCE Household Spending Survey shares design features with the main SCE—both pose probabilistic questions to a rotating panel of respondents—the information it collects is unique in several respects. First, it records detailed information about expectations for year-ahead changes in household spending (both in aggregate and by category), spending on essential and non-essential items, and the likelihood of making large purchases of various types. We also solicit information on the expected spending and saving response to an unanticipated increase or decline in household income. Turning to experiences, we also ask respondents about large purchases and changes in total spending over the past year, as well as the degree of month-to-month variability observed in their household incomes.

The data, together with a companion set of interactive charts (covering a subset of the data we collect), will be published every four months on the website of the New York Fed’s Center for Microeconomic Data going forward. As with other components of the SCE, we report statistics not only for the overall sample, but also for various demographic categories, namely age, education, household income, numeracy, and Census region. The underlying micro (individual-level) data for the full survey will be made available with a lag.

The remainder of this blog post discusses three series from this new dataset. Interested readers can view additional charts on the release webpage.

In our survey, we ask individuals to assign probabilities to possible outcomes of changes in their future household spending. More specifically, we ask for the percent chance that, over the next twelve months, the respondent’s change in household spending will fall into each of ten intervals or “bins”: -2 percent to 0 percent, 0 percent to 2 percent, etc. By eliciting respondents’ density forecasts in this way, we are able to measure not just the central tendency of their expectations but also their degree of uncertainty about future outcomes. As described in our background paper, we use each respondent’s bin probabilities to estimate the respondent’s density forecast, from which we then compute its mean, representing the expected spending growth rate. The chart below depicts the median of these expected spending growth rates since the start of the survey. The series is further broken down by education level. 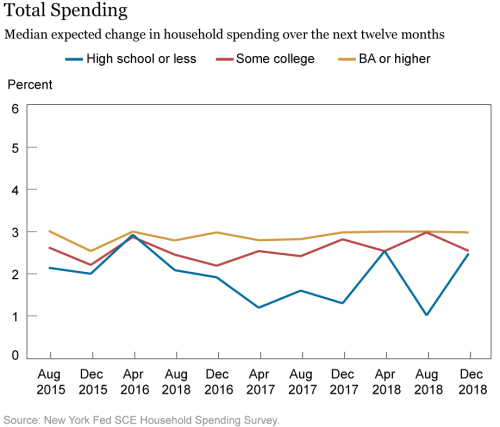 We collect similar information on the likelihood of making large purchases across a range of categories, such as electronics, furniture, vacations, home appliances, vehicles, home repairs, and homes or apartments. Our preliminary analysis also indicates that these expectations predict actual future spending, both at the aggregate and individual level, underscoring the value of collecting such data. 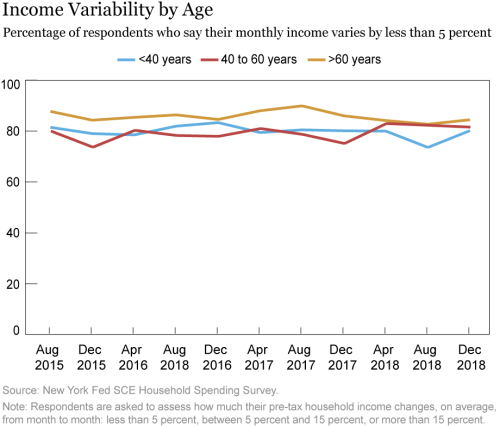 A third unique feature of our survey is that we elicit information that can be interpreted as a measure of a consumer’s marginal propensity to spend or save. More specifically, we ask respondents to imagine that next year they find their household with 10 percent more income than they currently expect, and ask what fraction of that extra income they would (i) save or invest, (ii) spend or donate, and (iii) use to pay down debts. The next chart shows the average allocation for each category as measured in December 2018, by age and income group. 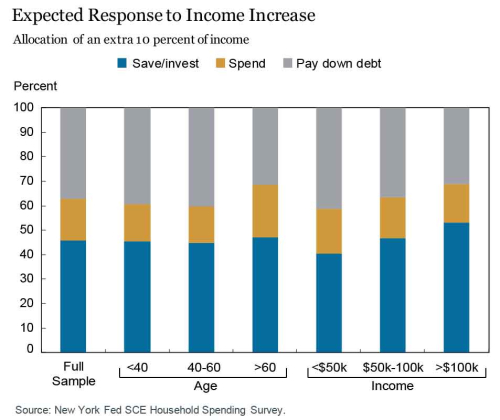 Overall, respondents would expect to spend 17.2 percent of the extra income, using the rest to pay down debt (37.0 percent) or save and invest (45.7 percent). This breakdown has been very stable since we started collecting these data in August 2015.

Comparing responses across age and income groups, the propensity to spend extra income is relatively constant, with older respondents (age 60 or over) reporting a slightly higher rate (21.5 percent) than those between 40 and 60 (14.9 percent) or younger than 40 (15.1 percent). The share of extra income used for consumption is also slightly higher among respondents with lower incomes—18.4 percent for those earning less than $50,000, versus 15.7 percent among those with incomes above $100,000. There are somewhat larger differences across groups in the income shares used to pay down debt and to save or invest, with debt payments being more prevalent among lower income and younger respondents, while saving and investing is more common for older and higher income respondents.

Finally, we also ask about expected behavioral responses to an unanticipated 10 percent drop in year-ahead household income. In that case we find a much higher response in spending, with reduced spending covering, on average, 75.4 percent of the income loss, reduced saving covering 20.1 percent, and increased borrowing covering 4.5 percent. We again find modest heterogeneity in responses across demographic groups, with smaller spending cuts reported at higher levels of age, education, and income. The asymmetry in responses to unexpected income gains and losses is consistent with evidence we have presented earlier and with findings in the literature on spending behavior.

The SCE Household Spending Survey provides a comprehensive picture of consumers’ experiences and expectations regarding household spending. These data can help shed light on the dynamics and near-term trajectory of overall consumption in real time. We believe that this new dataset will be valuable to the policy and research communities alike, enabling them to better understand household spending behavior.