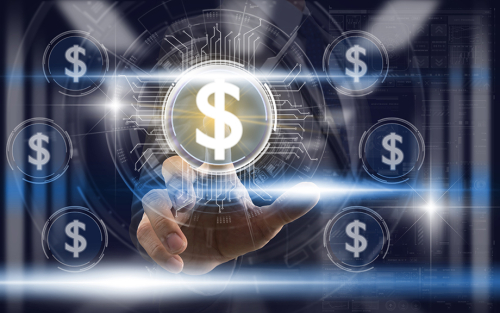 Having witnessed the dramatic rise and fall in the value of cryptocurrencies over the past year, we wanted to learn more about what motivates people to participate in this market. To find out, we included a special set of questions in the May 2018 Survey of Consumer Expectations, a project of the New York Fed’s Center for Microeconomic Data. This blog post summarizes the results of that survey, shedding light on U.S. consumers’ depth of participation in cryptocurrencies and their motives for entering this new market.

Actual and potential ownership of cryptocurrencies is concentrated in younger, wealthier demographics. Anecdotal evidence suggests that enthusiasm for cryptocurrency is highest among younger generations. Consistent with that pattern, we find that individuals aged eighteen to thirty-five (the “young” group) were 13 percent more likely than those over thirty-five (the “old” group) to own or express an interest in buying a cryptocurrency. (All results reported in this post are statistically significant at the 5 percent level.) Individuals belonging to the young group were more likely, on average, to report greater knowledge about cryptocurrencies, as shown in the chart below. 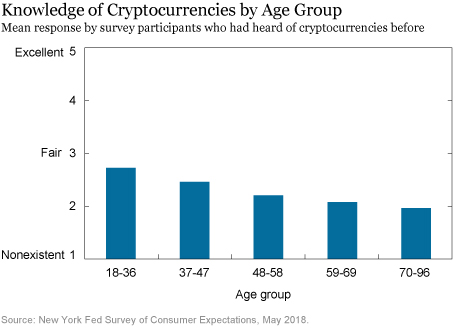 In contrast, individuals belonging to the old group appear less familiar with cryptocurrencies. For example, they were much more likely to cite “not knowing how to buy” cryptocurrencies as a reason for not owning any. This suggests that a lack of knowledge or familiarity with the cryptocurrency market could be an important barrier to entry for older demographics.

Individuals with an annual income of at least $100,000 are 5 percent more likely to own or express an interest in buying cryptocurrency relative to those with income of less than $100,000. Importantly, individuals in the young group are significantly more likely to report “lack of funds” as a reason to not buy. This suggests that financial constraints may have hindered otherwise enthusiastic members of the younger demographic from participating in cryptocurrency markets.

Cryptocurrency Is Like…?
In a previous blog post, we discussed how currencies may function as a method of payment or a store of value. Given the uncertainty surrounding the fundamental value of cryptocurrencies, parallels have been made between the rise of cryptocurrencies and the dot-com boom or even the impulse to buy lottery tickets. To understand people’s views on cryptocurrency, we asked survey respondents what they perceived cryptocurrency to be most similar to, given the following options (multiple answers were allowed, with the exception of “none of the above”): 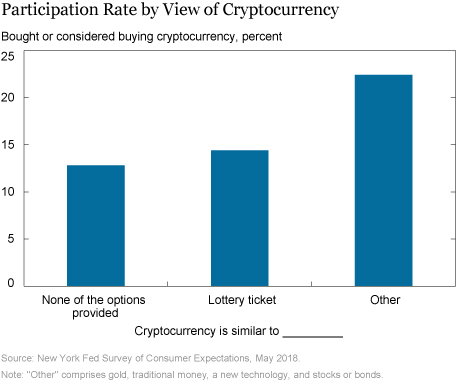 “Lack of trust” ranked second as a reason not to buy cryptocurrencies, perhaps reflecting their lack of institutional backing. Again, the “buyer” and “nonbuyer” camps are clearly divided on this matter; the former lack trust in the financial system, while the latter lack trust in cryptocurrencies. Respondents cited a lack of need as the third most significant reason for not buying cryptocurrency, consistent with the fact that cryptocurrencies are little used as a means of payment.

The issue of trust, or mistrust, appears to be perceived quite differently by the young and old groups. Individuals over thirty-five were much more likely to express distrust of cryptocurrencies relative to the existing financial system. The young group’s more sanguine view of cryptocurrencies could be related to the fact that financial crises appear to have long-lasting "experience effects" that take a greater toll on younger individuals than older ones, both psychologically and financially. In the wake of the Great Recession, younger cohorts may have less faith in the financial system and more openness to unconventional alternatives.


Sean Hundtofte, formerly an economist in the Federal Reserve Bank of New York’s Research and Statistics Group, is chief economist and head of credit risk at Better Mortgage.

Michael Junho Lee is an economist in the Federal Reserve Bank of New York’s Research and Statistics Group.


Reed Orchinik, a former intern in the Bank’s Research and Statistics Group, is a student at Swarthmore College.