The Sensitivity of Long-Term Interest Rates: A Tale of Two Frequencies 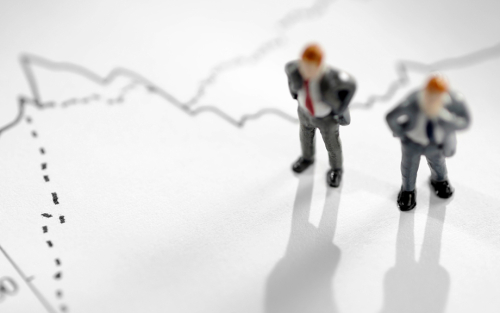 The sensitivity of long-term interest rates to short-term interest rates is a central feature of the yield curve. This post, which draws on our Staff Report, shows that long- and short-term rates co-move to a surprising extent at high frequencies (over daily or monthly periods). However, since 2000, they co-move far less at lower frequencies (over six months or a year). We discuss potential explanations for this finding and its implications for the transmission of monetary policy.

The Expectations Hypothesis and Term Premia

Despite its simplicity and theoretical elegance, the expectations hypothesis has been decisively rejected by empirical studies going back to the 1980s. The expectations hypothesis abstracts from the fact that the evolution of interest rates is uncertain and that investors dislike (undiversifiable) risk. How much risk investors are willing to bear can depend on a number of factors, including the state of the business cycle or “sentiment.” This economic debate is ongoing and was a central feature of the 2013 Nobel prizes in economics (see this Harvard Business Review article for an extensive discussion). For Treasury yields, variation in interest rates thus depends not only on what investors expect about future rates but also on “term premia,” or the additional compensation required by investors to hold long-term bonds as opposed to rolling over investments in short-term bonds.

We use a simple regression approach to study how the sensitivity of long-term interest rates to short-term interest rates varies as a function of the time horizon considered. We use ten-year Treasury yields as our measure of long rates and one-year yields as our measure of short rates. The sensitivity of long-term rates is then simply the slope coefficient from a regression of changes in long-term rates on changes in short-term rates over time windows ranging from a day to twelve months. We conduct this exercise in the 1971-2000 and 2000-2017 samples. 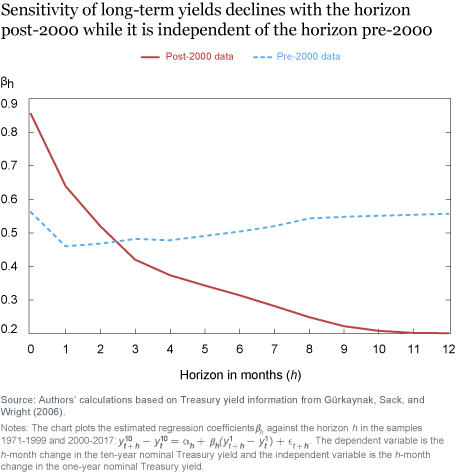 As shown by the blue line in the chart, between 1971 and 1999, a regression of daily changes in ten-year U.S. Treasury yields on daily changes in one-year yields delivers a coefficient of 0.56; the analogous regression using one- to twelve-month changes gives about the same coefficients. Between 2000 and 2017, the coefficient from the daily regression jumps to 0.86 while the coefficient from the corresponding twelve-month regression drops to just 0.20. In other words, changes in U.S. short- and long-term rates have become even more tightly linked at high frequencies since 2000, but have largely decoupled at low frequencies. We find broadly similar patterns for Canada, Germany, and the U.K.

What should we make of these results? The daily regression results in both sub-samples are consistent with prior findings. Shocks to monetary policy and the macroeconomy have generally been seen as being short-lived, so long-term rates should not be highly sensitive to changes in short rates if the expectations hypothesis holds. But Gürkaynak, Sack, and Swanson note that the strong sensitivity of long-term nominal rates could still be consistent with the expectations hypothesis if one adopts the nonstandard view that long-run inflation expectations are unanchored and are continuously being updated in light of incoming news. This narrative is conceivable as the blue line in the chart above shows that the high sensitivity is present at all different frequencies, and inflation was highly volatile in the pre-2000 sample.

However, the story in the post-2000 sample is much more complex. For one, in this sample, we find similar patterns in nominal and real yields, pointing to non-inflation-related factors. More importantly, the high sensitivity of long rates is only present at high frequencies. As a matter of statistical description, we show that this pattern arises because past increases in short rates systematically predict a future flattening of the yield curve—and predictable future declines in long-term rates—in the post-2000 data. These predictable yield curve movements are associated with a transitory rise in the expected returns on long-term bonds compared with those on short-term bonds. In other words, since 2000, term premia on long-term bonds appear to be temporarily elevated following past increases in short rates.

A Model to Explain the Findings

We construct a model to understand the shifting sensitivity of long-term rates to movements in short-term rates. In the pre-2000 period, there is a large, persistent component of short-term nominal rates, reflecting shocks to “trend” inflation, and this component, coupled with an expectations-hypothesis logic, explains the strong sensitivity of long rates at both high and low frequencies. In the post-2000 period, the estimated volatility of this persistent component of short rates drops sharply. From an expectations-hypothesis perspective, this decline in volatility should have reduced the sensitivity of long rates. In the data, this reduction occurs at low frequencies, but we see even greater sensitivity at high frequencies.

The greater sensitivity of long rates at high frequencies in the post-2000 period can be explained by two key ingredients: (1) short-term supply-and-demand shifts that move term premia in the same direction as short-term rates and (2) slow-moving capital. The simplest interpretation of the first assumption is the existence of yield-oriented investors who target a certain level of portfolio yield, but we present other possible foundations as well. The second assumption of a slow-moving capital dynamic (as in the work of Duffie) implies that the shifts in bond term premia triggered by movements in short rates are transitory. As a result, the excess sensitivity of long rates is greatest when measured at high frequencies.

Our results have important implications for interpreting event-study evidence based on high-frequency changes in long-term bond yields. The short-run change in long-term yields around macroeconomic news announcements, including monetary policy announcements, is often used as a convenient and unbiased measure of the longer-run impact of news shocks. However, if, as we show, some of the impact of a news shock on long-term rates tends to wear off quickly, then a shock’s short- and long-run impact will be quite different. The event-study approach will necessarily capture only the short-run impact.

Our findings also have implications for the transmission of monetary policy. In the textbook New Keynesian view (Galí, for example), the central bank adjusts short-term nominal rates, which affect long-term rates via the expectations hypothesis and aggregate demand. Jeremy Stein points out that the excess sensitivity of long-term yields—whereby shocks to short rates move term premia in the same direction—should strengthen the effects of monetary policy compared with the textbook view and refers to this as the “recruitment” or “risk-taking” channel of monetary transmission. While we confirm the findings of Stein, our results suggest that the recruitment channel may not be as strong as previously thought because a portion of the shifts in term premia are transitory and hence likely to have only modest effects on aggregate demand.

Samuel Hanson is an associate professor at Harvard Business School and a faculty research fellow at the National Bureau of Economic Research.

Jonathan H. Wright is a professor at Johns Hopkins University.