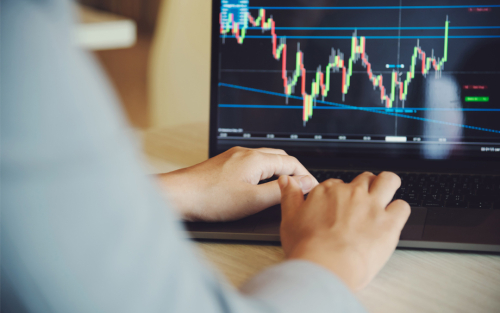 Repo Market Regulations
A repo is the sale of an asset, coupled with the promise to repurchase the asset at a future date at specified terms. Repo is a crucial financial market in the United States because it is a key source of short-term funding for securities dealers and facilitates secondary market liquidity in Treasuries and other securities.

After the financial crisis of 2007-09, new regulations imposed on BHCs made entering into repo transactions more costly. In particular, regulators issued new rules to bolster the liquidity and capital resources of the largest banks. For example, the adoption of Basel III rules required banks to maintain a thirty-day liquidity coverage ratio and to hold additional capital to meet the requirements of the supplementary leverage ratio. At the time, repo desks spoke of actions to adjust their repo activity in order to reduce the costs associated with the new regulations. Their actions ranged from reducing the amount of repo activity they executed to looking for ways to increase efficiency in executing repo activity (for example, taking steps to benefit from netting). Meanwhile, other factors have also affected banks’ balance sheets and influenced repo market dynamics since the financial crisis, such as unconventional monetary policy.

Measuring New Participants’ Activity
Because these regulations are only imposed on securities dealers associated with BHCs, it was predicted that those securities dealers that are not part of a BHC would gain market share. In order to evaluate the market share of new participants, we first need to understand how their chosen trading strategies allow us to capture a significant portion of their activity in the data available to us. 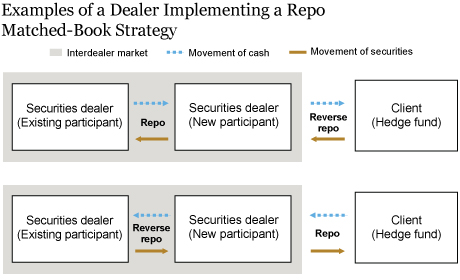 For the majority of cases, executing a repo matched-book strategy involves entering into a repo in an interdealer market. This fact is important to note because our repo data for smaller dealers are limited to interdealer activity. For smaller securities dealers, the repo contract, or the funding leg of a matched- book strategy, is usually executed in the interdealer market, since in that market a dealer can execute trades with anonymity—a feature that usually leads to a small dealer being offered more attractive terms than would result if it seeks funding directly from a cash-rich investor. (Cash-rich investors such as money market mutual funds, for example, tend to be wary of investing in smaller dealers, even on a secured basis.)

A variation on the above matched-book strategy involves the securities dealer sourcing a security for a client. In this scenario, the dealer enters into a reverse repo to acquire a specific security (for example, an on‑the‑run Treasury security) and then repos that security out to a client (see the second figure in the illustration). Similar to the case above, we would expect the dealer to source the security from another dealer, and so execute the reverse repo in the interdealer market.

A third variation of the repo matched-book strategy involves both the reverse and repo contracts being executed in the interdealer market. For example, a new repo participant could be providing intraday liquidity, with the constraint of not carrying a position overnight.

A final variation on the matched-book strategy involves the dealer executing the transaction outside of the interdealer market. This could happen, for example, if one client of the dealer wants to take a long position in a security while simultaneously another client wants to take a short position in the same security. The dealer would then be able to satisfy both clients’ needs without sourcing securities or funding from the interdealer market. In our understanding, unlike the large securities dealers, smaller dealers do not have a large enough client network to generate much activity of this type.

Consequently, for three out of the four cases described above, we expect the matched-book trading strategy executed by the new repo participants to result in at least one repo or reverse repo occurring in the interdealer market. Only the fourth case, which is an unusual case for smaller dealers, occurs without any interdealer trades. As such, we will measure the growth for new repo participants by measuring their interdealer activity over time.

How Are the New Participants Faring?
To measure new repo dealers’ activity we look at the two main interdealer repo markets in the United States, the General Collateral Finance Repo Service (GCF Repo®) and the Fixed Income Clearing Corporation’s Delivery vs. Payment Service (FICC DvP). In both markets, dealers can only execute trades if they are a member of FICC, a financial utility which acts as a central counterparty.

We label participants as “new” if they have become a member of FICC since June 2012, when the Board of Governors of the Federal Reserve System invited comment on proposed rules to implement the Basel III capital reforms. Strikingly, the total of new members' reverse repo and repo activity has more than doubled since the start of 2018 (see the chart below). 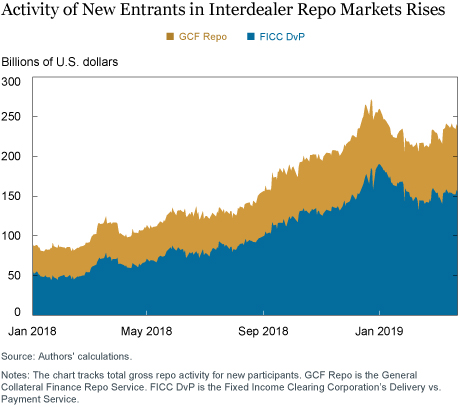 The growth in GCF Repo among new participants is almost entirely composed of these participants seeking funding against securities. This activity is consistent with the first matched-book case outlined above, where the dealers are receiving the securities from clients and then sourcing funding in the interdealer market. The drivers of growth in FICC DvP are more varied, with the new participants showing end-of-day positions consistent with all three repo matched-book strategies described above.

Ira Selig is a manager in the Bank’s Supervision Group.

As long as the ultimate cash sources prefer to deal with the BHC-related dealer, we shouldn't expect new entrants to become a large part of the market. The overall picture is one of cash flowing from cash sources through dealer markets to levered securities holders (Hedge Funds, REITs, etc.) The BHC-related dealer providing a deposit alternative to his cash investing customer is then faced with a choice: She can face the levered account directly, or get securities through FICC from a 'new entrant' that faces the levered account. Clearly any market maker would prefer to meet the client's needs directly rather than face FICC anonymously. The client relationship, if tended, will produce value over time.