The Keynesian Growth Approach to Macroeconomic Policy and Productivity 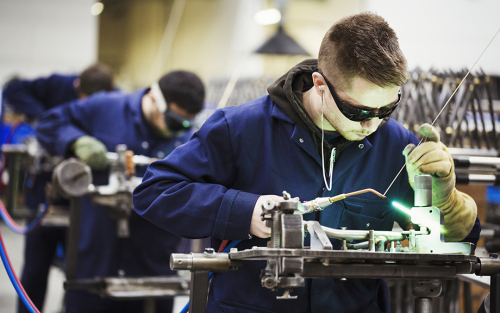 Productivity is one of the key determinants of potential output—that is, the trend level of production consistent with stable inflation. A productivity growth slowdown has occurred in several advanced economies in the aftermath of the global financial crisis, raising concerns about long-term growth. In response, a variety of supply-side policy options have been proposed, such as reforms to increase labor and product market flexibility. In this blog post, we consider the role of demand-side policies in raising trend productivity growth.

Supply and Demand Drivers of Productivity
The chart below illustrates the decline in labor productivity growth in the United States, the euro area, and the United Kingdom since the global financial crisis. 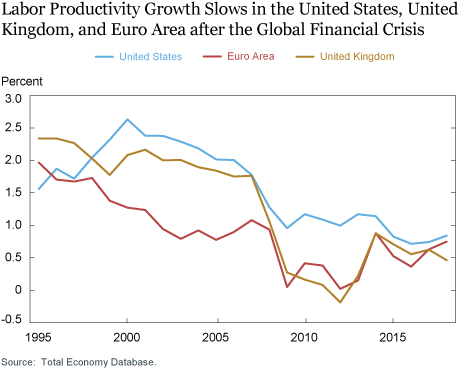 A view deeply entrenched in mainstream macroeconomics is that trend productivity growth is the outcome of technological and institutional factors and can be treated essentially as an exogenous force, unresponsive to business cycles or monetary policy actions. The workhorse macroeconomic models used by international organizations and central banks are built upon this notion.

This view, however, struggles to explain some key empirical facts. For instance, Blanchard et al. (2015) show that recessions tend to be followed by prolonged slowdowns in productivity growth, causing persistent deviations of output from prerecession trends. This evidence suggests that recessions have an impact on long-run output, a phenomenon known as hysteresis. In a similar vein, Ball (2014) has emphasized how the Great Recession has been associated with permanent drops in the trend path of output in most advanced economies. 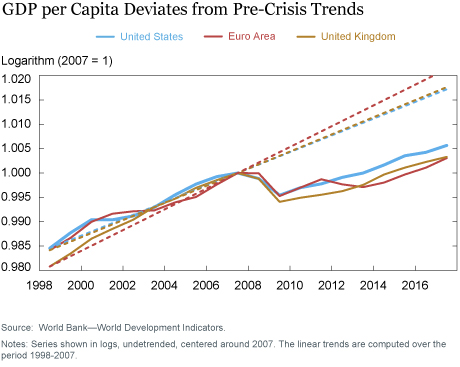 These facts, as pointed out by several economists (Fatas and Summers, Kocherlakota, Krugman, Smith, Wren-Lewis), suggest that the conventional wisdom might be incomplete and that trend productivity responds to changes in aggregate demand. In turn, this suggests that traditional views on the link between monetary policy and long-term growth need to be re-evaluated.

The Keynesian Growth Framework
In Benigno and Fornaro (2018), we propose an approach that we call “Keynesian Growth,” in which the demand and supply sides of the economy are intrinsically linked, so that cyclical fluctuations and long-term trends are interdependent. By providing a theory of long-run growth that builds upon a Keynesian approach to economic fluctuations, our approach brings together the Keynesian insight that falling demand causes recessions with the notion, developed in the endogenous growth literature, that productivity growth is the result of investment in innovation and new technologies by profit-maximizing firms. Thus, departing from the neoclassical framework, in which productivity is determined by exogenous forces, our approach treats productivity growth as an endogenous phenomenon.

In this framework, aggregate demand is one of the key determinants of business investment spending and productivity growth. For example, companies have little appetite for investing in new technologies during a recession, because they anticipate that the profits derived from this investment will be low. As a result, future productivity growth falls and the economy’s potential output drops. Through this channel, temporary recessions can have persistent adverse consequences for long-run output.

Policy Implications
As a corollary, our model also suggests that counter-cyclical monetary policy can play a key role in supporting trend productivity growth. Three aspects of this relationship are worth emphasizing.


Luca Fornaro is a junior researcher at CREI and research professor at the Barcelona Graduate School of Economics.


How to cite this blog post:
Gianluca Benigno and Luca Fornaro, “The Keynesian Growth Approach to Macroeconomic Policy and Productivity,” Federal Reserve Bank of New York Liberty Street Economics (blog), April 1, 2019, https://libertystreeteconomics.newyorkfed.org/2019/04/the-keynesian-growth-approach-to-macroeconomic-policy-and-productivity.html.
Posted by Blog Author at 07:00:00 AM in Macroecon

Thanks for your comment. We are indeed working on a review article that will discuss these links with the post-Keynesian literature.

Thank you for an important post that "rethinks" macroeconomics. However, it is interesting to note that the idea that demand affects trend productivity is really "rediscovery" of an hypothesis that has been de rigeur among post-Keynesians in the tradition of Kaldor for around fifty years, sometimes called the Kaldor-Verdoorn Law.