How Large Are Default Spillovers in the U.S. Financial System? -Liberty Street Economics 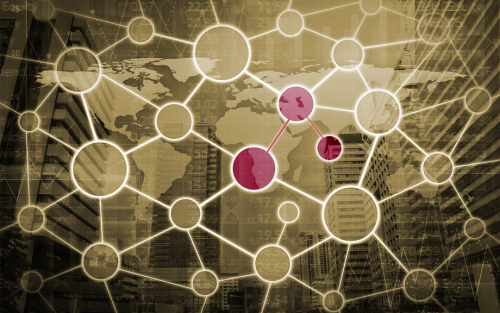 Detailed Network Data is Difficult to Obtain
The main challenge in estimating the expected value of default spillovers is that it requires knowledge of all the bilateral claims between each pair of nodes. Such granularity of data is not publicly available. Moreover, for some financial firms in less regulated parts of the financial system, such data may not even exist, except in fragmented form inside the firms themselves.

An Upper Bound on Network Default Spillovers
Our goal is to estimate expected default spillovers for the entire U.S. financial network, across all institutions and asset classes, with the fewest assumptions possible. To do so, we use a new way to deal with the problem of data deficiency proposed by Glasserman and Young. They show that for a very broad class of models, even though the actual expected spillover losses cannot be computed without knowledge of all bilateral exposures, an upper limit to these spillovers can be estimated using only node-specific information (that is, without a precise breakdown of the nodes' counterparties or the magnitudes of obligations to them). In particular, the upper limit is based on each node's probability of default, its total outside assets, and its ratio of inside liabilities to total liabilities. Thus, at the cost of estimating an upper bound on spillovers instead of their actual values, the data requirements are greatly reduced.

Empirical Estimate
With this less stringent data requirement, in a New York Fed Staff Report, we study a network that captures around 85 percent of all assets of the U.S. financial system as reported in the Financial Accounts of the United States. We use publicly available data together with commercially available data from Moody’s. The chart below shows the upper limit on expected losses due to network default spillovers as a percentage of expected losses in the analogous disconnected network. In other words, the line in the chart shows an upper bound on the losses that can be attributed to the default spillovers as a fraction of the initial direct losses that do not stem from network effects. 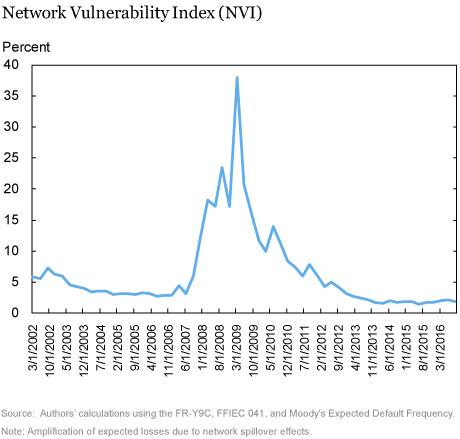 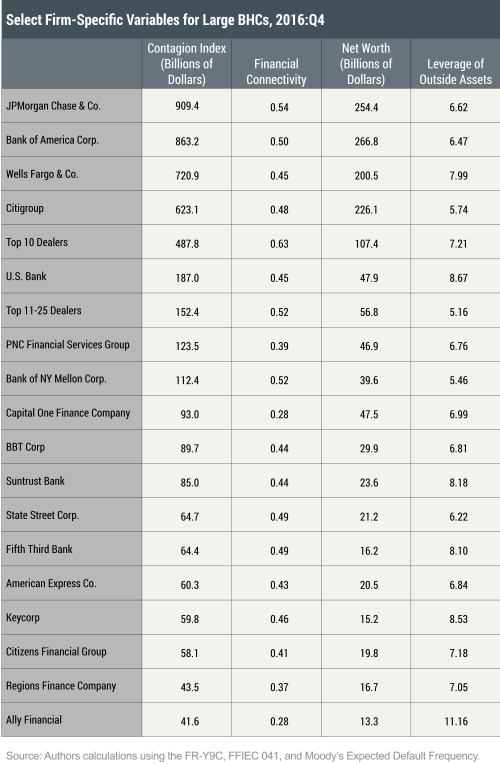 Digging Deeper
Estimating an upper bound on spillovers is most useful when its value turns out to be low, since then we can then be more confident that actual spillovers are expected to be low. When the upper bound is high, as in 2008-09, actual expected spillovers can be as high as the bound or as low as zero. One way to obtain some further insight into situations in which the estimated upper bound is relatively high and uninformative is to look at all possible network topologies that are consistent with the observed data. 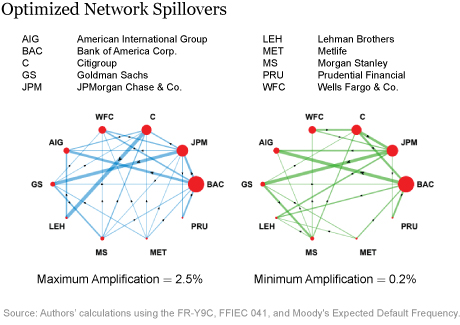 I believe the Default Risk amongst US Financial Funds, Banks and etc. is larger than what is represented. They all have the same investments and many of these investments are Illiquid. Just like we are seeing in Europe, as the problems unfold with Illiquid Investments, Woodford, H20 Fund, GAM and etc. then we have Deutsche Bank, where there is serious Default Risk and I wonder how many US Firms are exposed to Deutsche Bank?

The Default Risks and losses are in Credit, Debt, & Counterparty Risks.

As an aside you noted AIG, AIG seeds of Failure began in the 1980's where they made some large changes which lead to their failure in 2008.