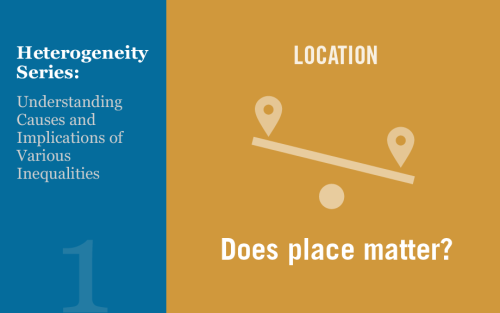 Where Is Wage Inequality Greatest? 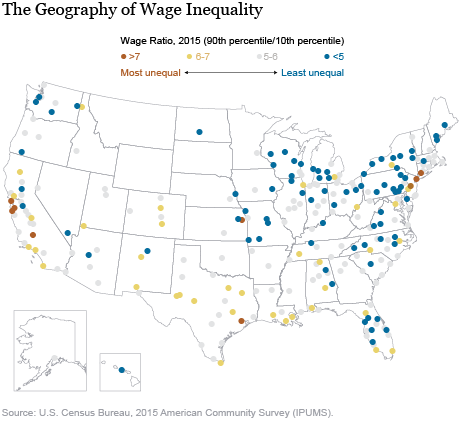 What Makes Some Places More Unequal than Others?

These regional differences in wage inequality reflect the local effects of technological change and globalization on workers. These effects conform to one of two general patterns. In one set of places, technological change and globalization have led to a vibrant economy and strong demand for skilled labor. For example, San Francisco has seen a burgeoning tech sector in recent decades, resulting in strong demand and vigorous wage growth for highly skilled workers, especially those at the very top of the wage distribution. Likewise, skilled workers in the finance industry have been in strong demand in New York City, and their wages are particularly high. In places like these, wages for skilled workers toward the top of the wage distribution have increased significantly relative to those at the middle and bottom, resulting in relatively high levels of wage inequality.

Other Factors at Work

While technological change and globalization have been the key drivers of these geographic patterns, there are two other important factors contributing to and reinforcing regional differences in wage inequality. First, agglomeration economies—or the benefits that arise when people and firms locate in large numbers near one another in cities—have enhanced the productivity and wages of skilled workers in large, dense metropolitan areas. While agglomeration economies have been shown to raise the productivity of all workers, recent research has found that these benefits tend to favor higher-skilled workers more than lesser-skilled workers. As a result, highly skilled workers in places where skill is concentrated tend to command even higher wages than they would earn elsewhere, amplifying wage inequality in those places. Second, migration within the United States has changed the mix of workers across places. Indeed, since the early 1980s, skilled workers have become much more geographically concentrated as those with college and graduate degrees have flocked to large cities while lesser-skilled workers have increasingly been priced out of such places—in no small part because of high and rising housing costs. This pattern of internal migration has reinforced the productivity benefits of agglomeration economies in many places.

Jeffrey: Many thanks for your comments on this post. In terms of the spatial unit of this analysis, we focus on metropolitan areas as they are a good approximation of local labor markets. So, yes, when we refer to Fairfield, CT, in this post it is the Fairfield County metro area, not the town.

I can only imagine you mean the Fairfield COUNTY metro area. Fairfield CT is a town of 60K people and hardly a metropolitan area, but you never use the word “county” in this publication.