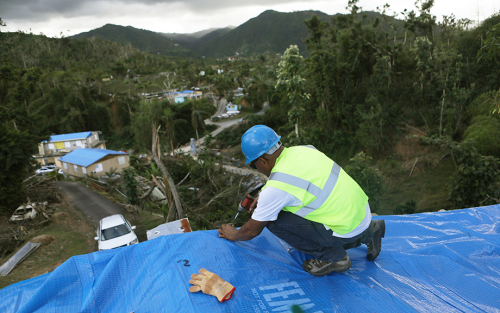 Background
To put the two territories’ post-hurricane economic and fiscal situations into context, it is important to understand their respective trends over the past decade. Both had been in economic slumps since around 2006; in fact, from that time until just before the 2017 hurricanes, each area had sustained a roughly 16 percent drop in total employment as well as a sizable contraction in GDP. These protracted downturns were accompanied by high and rising public debt burdens, leading to a fiscal crisis in Puerto Rico and tremendous fiscal stress in the Virgin Islands. Severe disruptions in the aftermath of hurricanes Irma and Maria exacerbated these existing conditions, leading to a sharp drop-off in both employment and economic activity in the fourth quarter of 2017. This early-2018 New York Fed press briefing provides an overview of the two economies, both before and immediately after the hurricanes.

Assessing the Recoveries
Now, just over two years after Irma and Maria, we have a clearer sense of how deep and sustained the disruptive effects of the storms were on both territories. As shown in the chart below, the Virgin Islands suffered a much steeper initial drop-off in employment (19 percent) than Puerto Rico (7 percent), and subsequently a much weaker and slower recovery. By the twelve-month anniversary of Hurricanes Irma and Maria, private-sector employment was still down 13 percent in the Virgin Islands, versus just 1 percent in Puerto Rico—thus, more than 85 percent of the initial job loss in Puerto Rico had been reversed, compared with barely over 30 percent in the Virgin Islands. In fact, as of August 2019, employment in Puerto Rico’s private sector was actually slightly above pre-hurricane levels, whereas the Virgin Islands’ private-sector job count was still down more than 3 percent, based on the New York Fed’s early benchmarked estimates—the deepest sustained post-hurricane job loss in any U.S. area, except for New Orleans following Katrina in 2005-07. 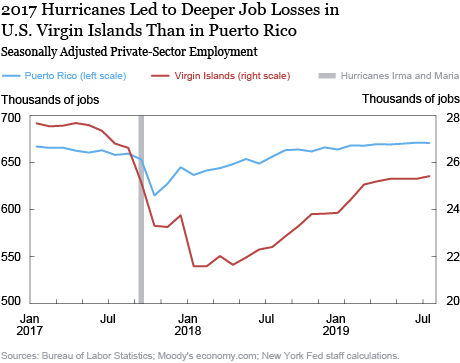 Why Such a Divergence?
A number of factors may have contributed to the territories’ contrasting economic performance. First, the physical damage associated with the hurricanes may have been more widespread and severe in the Virgin Islands than in Puerto Rico. Two weeks before Maria, Hurricane Irma made a direct and devastating hit on St. Thomas and St. John—the northern islands of the U.S. Virgin Islands. Then Maria hit St. Croix head on, as well as Puerto Rico. It is not clear whether Puerto Rico’s much larger “footprint” (area) was a help or a hindrance—on the one hand, the southwestern and western parts of the island were on the backside of Maria and did not experience quite as much wind damage; on the other hand, many interior parts of Puerto Rico were inaccessible for a long time. Thank you for your interest and your thoughtful questions.

In this analysis, we focused only on employment and earnings, not the number of establishments. But I think it is almost certain that the USVI did indeed lose a larger proportion of such establishments, after the storms, than Puerto Rico. If so, the same question remains: why? Insofar as disruptions in the USVI (positively) affected Puerto Rico, it’s important to remember that PR’s economy and population are about 30x as large as the U.S. Virgin Islands’, so it’s unlikely that anything going on in the USVI would have any significant direct effect on Puerto Rico.

As for the notion that some of the high-paying construction jobs may be going to workers imported from the mainland, that is indeed a possibility in both USVI and Puerto Rico—and that would cause *both* the post-hurricane earnings and employment levels to be somewhat overstated. However, to be included in the islands’ job and income counts, a worker has to be on the payroll of a local employer; contract workers from the mainland are not included.

And finally the policy ratcheting up the minimum wage in the U.S. Virgin Islands was implemented long before Irma and Maria, so the storms would not have been a factor in that decision.

What percentage of high-paying construction jobs in the USVI are held by USVI residents? If most of these jobs are filled by construction workers from outside the USVI, the wage impact for USVI residents may be as pronounced as the job impact.

Did federal government contracts for recovery efforts require that a certain percentage of the jobs be filled locally? This is sometimes the case. If so, this could explain the decision to dramatically increase the minimum wage during an economic slump. If this is the case, it is a further indicator of the weakness of the USVI economy (dependence upon federally-mandated jobs overriding other considerations).