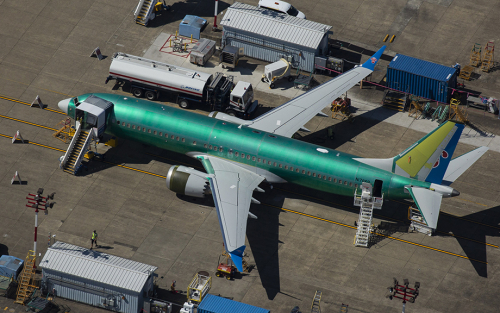 Large firms play an integral role in aggregate economic activity owing to their size and production linkages. Events specific to these large firms can thus have significant effects on the macroeconomy. Quantifying these effects is tricky, however, given the complexity of the production process and the difficulty in identifying firm-level events. The recent pause in Boeing’s 737 MAX production is a striking example of such an event or “shock” to a large firm. This post applies a basic framework that is grounded in economic theory to provide a back-of-the envelope calculation of how the “737 MAX shock” could impact U.S. GDP growth in the first quarter of 2020.

Background
A typical economy has many firms operating in it. If these firms were all the same size and their production activities were completely independent, then we would not expect a shock to production of one firm (a labor strike, for example) to have an effect on the macroeconomy, since the impact of this firm-specific event would be minor in comparison to the activity of all the other firms in the economy. Formally, this argument rests on the statistical concept of the “law of large numbers.”

A recent literature in macroeconomics undermines this logic, given observations of the production structure of the U.S. economy. First, Gabaix (2011) shows that as long there is sufficient variation in the distribution of firm size (as measured by firm sales, say), then it’s possible for shocks to large firms to have an effect on the macroeconomy. His theory of “granularity” makes this argument more formal by showing that if the distribution of firm size is sufficiently “fat-tailed”—in other words, if there are only a small number of large firms relative to the total number of firms of smaller size—then the law of large numbers no longer applies, and an event like a production stoppage in a large firm like Boeing will impact aggregate output. This view of the economy is very realistic: the distribution of firm size has been shown by Axtell (2001) (among others) to be sufficiently fat-tailed to make the “granularity” theory relevant. (Axtell [2001] uses data on firm size from the U.S. Census.)

A second mechanism through which a shock specific to a firm can impact the aggregate economy arises from the fact that firms’ production processes may be linked, given the use of intermediate goods in the production of a final product. For example, Boeing sources different parts from independent suppliers before assembling an airplane. These linkages are measured by national authorities in the form of sector-level input-output tables, whose construction, in turn, relies on surveys of firms. Given these linkages, Acemoglu et al. (2012) show how a shock to a specific firm can propagate and impact aggregate output. As with the “granularity” theory, it is important that the linkages between firms are not all of the same size. Rather, as long as a firm is a key supplier or customer for the rest of the economy, then a shock specific to the firm may have an aggregate impact. For example, in the case of the production cut by Boeing, the firm will demand fewer inputs from many different suppliers, who will then demand fewer inputs from their suppliers, and so on, and the original shock to Boeing will transmit to an important portion of the economy. In this sense, it is important to look not just at bilateral firm relationships, but at the whole network of linkages across the economy.

Basic Methodology
Following the baseline framework in Gabaix (2011), first consider an economy composed of a finite number of firms, where each firm has a constant-returns-to-scale production function and only uses primary factors (labor, for example) and some firm-specific technology, which is subject to uncorrelated random shocks. Crucially, firms do not use intermediate goods in production. The economy’s GDP is then the sum of each firm’s output, which equals firm value added, and the GDP growth rate is a weighted sum of firms’ output growth, where the weight equals the firm’s value-added share of GDP in the previous period.

If, instead, supply chains exist in the economy, then a firm’s production function must include intermediate goods. In this case, as formalized by Acemoglu et al. (2012) in a model with production networks, GDP growth is still equal to a weighted sum of firm growth rates, but the weight now equals the share of GDP represented by the firm’s sales in the previous period. These sales shares, commonly referred to as Domar weights, were used by Hulten (1978) to show the aggregate impact of productivity changes at the microeconomic level in a world with intermediate inputs—referred to as “Hulten’s Theorem.”

The difference between a world with supply chains and the baseline model with no intermediates is that shocks to firms can now propagate up and/or down the supply chain to other firms in the economy, affecting their production as well. Given the model assumptions in Acemoglu et al., this propagation is picked up in a firm’s Domar weight in a closed economy (where all intermediates are sourced domestically), and is why a firm’s sales-to-GDP ratio rather than its value-added-to-GDP ratio is used to measure the aggregate impact of a firm-specific shock.

The Case of Boeing
Given this theory, two pieces of data are needed to examine the impact of a production shutdown of the 737 MAX: Boeing’s Domar weight (calculated from its reported sales revenue and U.S. GDP) and a measure of an idiosyncratic productivity shock to Boeing. This second variable is more difficult to quantify and arguably harder to forecast. Therefore, calculations rely on several simplifying assumptions to identify this shock through observable data, and ignore potentially important dynamics (such as inventory adjustments), which, if incorporated, would give a richer view of the impact of this shock on Boeing, its suppliers, and aggregate output over time.

The table below presents Boeing’s global annual sales, its implied Domar weight, and annual U.S. GDP over 2007–18. Boeing’s sales-to-GDP ratio has increased over time, and averages 0.0047 over this period. While Boeing’s Domar weight appears to be small, it is still much larger than that of the average firm that would exist in an economy populated by identically sized firms: According to the U.S. Census’s 2012 Survey of Business Owners, there were more than 27.6 million firms in the United States. Setting the number of firms to this value would imply a Domar weight of 1/27.6*106 = 3.62*10-8 << 0.0047. 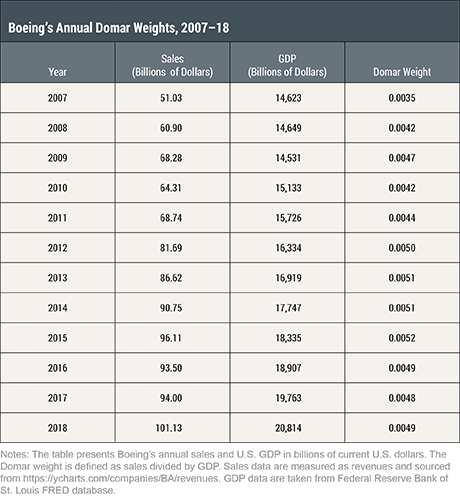 Note that given the slowdown in Boeing 737 MAX production over the first three quarters of 2019, Boeing’s Domar weight dropped to 0.0027 on average during that time. This fall in sales share underscores the importance of the 737 MAX to Boeing’s revenues—indeed, the aircraft represents the majority of plane production for Boeing.

To consider the implications of the production halt for the first quarter of 2020 as the idiosyncratic shock, we need to calculate how much total sales would fall relative to some baseline number. In 2018, prior to the slowdown in production that began in 2019, Boeing was producing roughly fifty-two 737 MAXs on average per month. Given the recent pause in production and sales, this number is assumed to drop to zero for the first quarter of 2020. In terms of factors of production, we will further assume that even though workers may not be laid off, the value associated to their productive capacity is zero. Furthermore, we will assume that all suppliers are domestic and therefore are impacted one-for-one with Boeing’s drop in demand (note that this assumption will overstate the impact of the shock on GDP, since some of Boeing’s suppliers are foreign firms). These assumptions allow us to apply Hulten’s Theorem to the implied percentage change in sales from the 737 MAX production pause. Specifically, given these assumptions, the idiosyncratic shock is measured as the percentage decrease in quarterly sales revenue relative to our baseline year’s (2018) quarterly average sales revenue.

Boeing averaged about $25 billion in quarterly revenue in 2018. Assuming that the average price of a Boeing 737 MAX is roughly $130 million, a pause in all production and sales implies lost revenue of $7 billion per month, or $21 billion for the first quarter of 2020. This then implies a sales loss of roughly 84 percentage points relative to an average quarter in 2018. Treating this sales loss as the firm shock, the lost GDP growth is then Boeing’s Domar weight times this loss (0.0047*–0.84 = –0.004), or a 0.4 percentage point decline in GDP growth. This is a significant fall given an average quarterly GDP growth of 2 percent. It is also important to note, as shown by Baqaee and Farhi (2019), that the application of Hulten’s Theorem may understate the impact of the shock in a world where nonlinearities exist, and which are ignored in the baseline model.

Conclusion
Boeing is a large firm that is highly integrated in the domestic production network and that has been hit by a sizable firm-specific shock. Thus, one should expect U.S. GDP to suffer, all else being equal. However, the calculations in this post reflect several simplifying assumptions, and have ignored potentially important dynamics (such as inventory and labor adjustments) as well as the fact that Boeing sources inputs from abroad, factors that, if incorporated, would give a richer view of how the 737 MAX shock might impact Boeing, its suppliers, and aggregate output over time.

Finally, note that the basic frameworks described above focus on the impact of firm-specific productivity shocks. However, the impact of firm demand shocks, which have also been shown to affect aggregate output (see, for example, di Giovanni et al. 2014), can also be considered in granular/input-output frameworks, and have the same effect as productivity shocks in most models. Moreover, aggregate shocks, such as changes in foreign countries’ demand for domestically produced goods, or changes in monetary or trade policies that affect firms heterogeneously, can also be examined in these models (such as di Giovanni et al. 2020).