« Fight the Pandemic, Save the Economy: Lessons from the 1918 Flu | Main | Monitoring Real Activity in Real Time: The Weekly Economic Index » 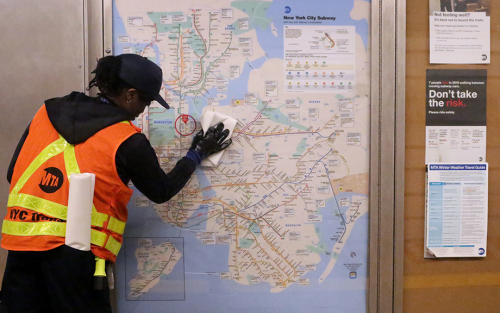 With the coronavirus outbreak affecting businesses in myriad ways, partly through state directives covering local businesses, many firms in the region have curtailed their activities, mostly temporarily. As mentioned, about half of service firms and more than a third of manufacturers have instituted a partial temporary shutdown. Fewer than 10 percent of firms indicated that they have implemented a permanent shutdown, whether partial or full, and the vast majority of businesses surveyed said they are not planning to do so. In terms of the bottom line, 85 percent of service firms and 70 percent of manufacturers indicated that their profits have already fallen since the beginning of March, in many cases substantially.

The magnitude of such disruptions has reverberated through the labor market. As the table below shows, roughly 40 percent of service firms said they have already reduced payroll staff as a result of the coronavirus outbreak, with the most widespread declines reported by leisure and hospitality, retail trade, and health services businesses. Geographically, staff reductions among service firms tended to be most widespread on Long Island, in the Lower Hudson Valley, and in upstate New York; less so in New York City, northern New Jersey, and Fairfield County, Connecticut. Around 30 percent of manufacturers reported staff reductions. In both surveys, similar proportions of firms said they have cut back the hours of existing staff and reduced the number of temporary workers. 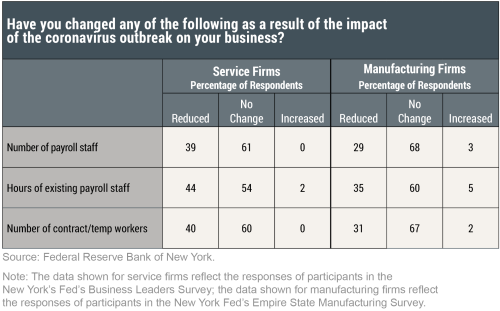 We also asked whether and how firms have adjusted work arrangements to adapt to the coronavirus outbreak. More than 80 percent of service firms said they have implemented or expanded telecommuting. About half of those have done so for all staff, with the average service firm indicating that nearly 60 percent of staff are currently telecommuting, and this incidence is highest (75 percent) among New York City firms. However, manufacturers indicated that only about a quarter of their staff, on average, are telecommuting. Further, about half of all firms indicated they have implemented or expanded paid sick/family leave for their workers.

Many firms are concerned about access to credit and maintaining solvency, as shown in the table below. The greatest concern among both service firms and manufacturers is their ability to get adequate credit from suppliers. Maintaining solvency and incurring excessive debt were also fairly widely mentioned as concerns, particularly among firms in the finance industry. 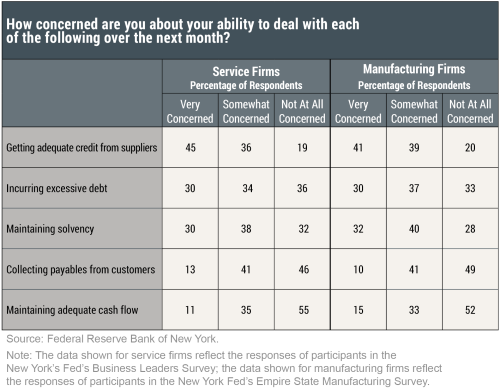 Finally, respondents were asked how they were covering shortfalls in revenues, with results shown in the table below. Drawing down cash reserves was widely mentioned, followed by making increased use of credit lines. A number of respondents also indicated that they are dipping into personal savings, while relatively few are taking out new loans or making a claim on business interruption insurance. Of note, a sizable number of firms commented that business interruption insurance policies would not cover damages resulting from the coronavirus outbreak. 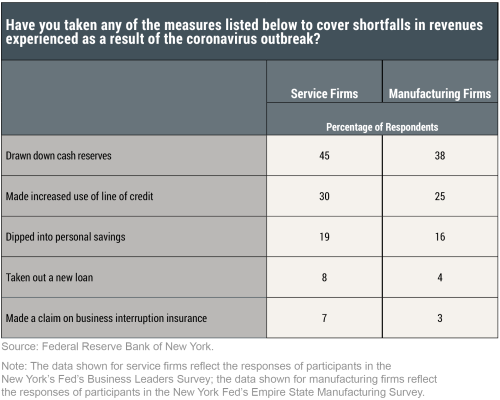 As the coronavirus pandemic unfolds, we will continue to monitor economic conditions in the region and make our results available as quickly as possible. Our next regular monthly business survey reports—Empire State Manufacturing Survey, Business Leaders Survey, and Supplemental Survey—will be released on April 15 and 16.

Jaison R. Abel is an assistant vice president in the Research and Statistics Group of the Federal Reserve Bank of New York.

Posted by Blog Author at 07:00:00 AM in Pandemic, Regional Analysis