« Women Have Been Hit Hard by the Loss of Routine Jobs, Too | Main | Searching for Higher Job Satisfaction »

Is the Tide Lifting All Boats? A Closer Look at the Earnings Growth Experiences of U.S. Workers 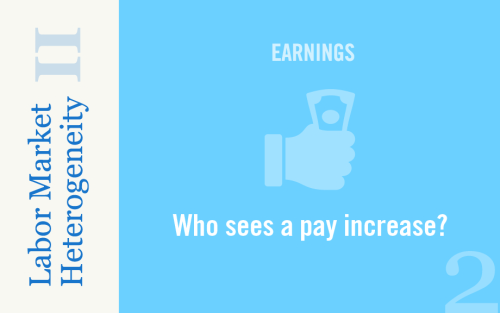 The growth rate of hourly earnings is a widely used indicator to assess the economic progress of U.S. workers, as well as the health of the labor market. It is also a measure of wage pressures that could potentially spill over into inflationary pressures in a tightening labor market. Hourly earnings growth, on average, has gradually risen over the course of the current expansion, under way since the end of the Great Recession. But how have different groups of workers fared in this regard? Have hourly earnings risen uniformly at all points of the wage distribution, or have some segments of the workforce been left behind? In this post, we take a close look at earnings growth over the past two decades at different points of the wage distribution and for various demographic groups. Our goal is to examine whether there are any significant patterns in the evolution of the distribution of earnings, as opposed to just looking at the behavior of aggregate earnings growth. We focus primarily on hourly earnings growth, although our findings apply to total earnings as well.

We perform our analysis using data from the Bureau of Labor Statistics’ Current Population Survey (CPS). In particular, we focus on prime-age (25 to 54 years of age) workers who are present in two consecutive CPS March supplements (the Annual Social and Economic Supplement), to compute earnings growth from one year to the next for the same individual. In order to minimize volatility and measurement error in our estimates, we further restrict the sample to look at full-time employees, defined as individuals who worked for at least forty-five weeks and usually worked at least ten hours per week in both years. Hourly earnings are computed as annual labor earnings divided by the product of weeks worked last year and usual weekly hours. Workers with hourly wages below the federal minimum wage are dropped from the sample.

The chart below reports average hourly earnings growth by quartile of the initial hourly earnings distribution in each year. We find that—perhaps surprisingly—average hourly earnings at the bottom of the wage distribution have been consistently growing faster than those at the top of the distribution. This pattern is partly driven by the fact that it is more common for low-wage workers to receive large wage increases in percentage terms than for high-wage workers, even though such increases are not that large in absolute terms. As a consequence, it is worth noting that these results are still consistent with increasing income inequality as measured by the variance of earnings. More importantly, the pattern we observe may also be the result of negative shocks to incomes that turn out to be transitory: a worker may have low earnings today because of an adverse event, but if that event is transitory there is a good chance that the worker’s earnings will recover next year.

The finding reported in the chart holds true even within age groups, so it is not just the result of lifecycle patterns (typically, earnings growth is more rapid at the beginning of one’s career and slows down as the worker becomes more mature). Interestingly, the top and bottom of the earnings distribution have experienced a stronger increase in the rate of earnings growth than the middle portion of the distribution over the past four years: this could be related to the gradual decline of “routine,” middle-skill jobs, a process that might accelerate following recessions, as various researchers have highlighted. 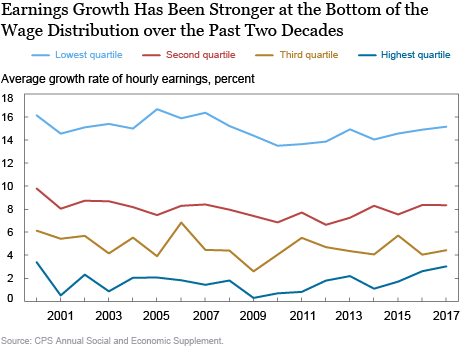 Turning to the evolution of earnings growth by education, hourly earnings of more educated workers (with a college or advanced degree) have tended to grow faster than for less educated ones (those with a high school diploma or less). On average between 2010 and 2016, hourly earnings of workers with a bachelor’s degree grew by 7.8 percent annually, whereas wages grew by 6.5 percent for those with a high school diploma or less. This finding is especially evident in the current expansion (2009-16), although the pattern reversed in 2017. This is consistent with increasing returns to education, a trend that has been operating at least since the 1990s. 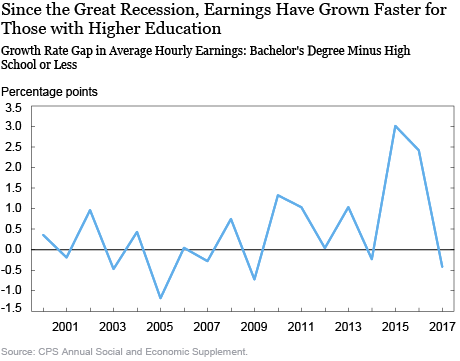 Finally, the last chart presents average hourly earnings (in constant 2017 dollars) by race and ethnicity. Here we find that, if anything, hourly earnings of Hispanic and especially African American workers seem to have been catching up with those of Whites, at least in more recent years. Hourly earnings of Asian workers have been growing faster than for any other group. 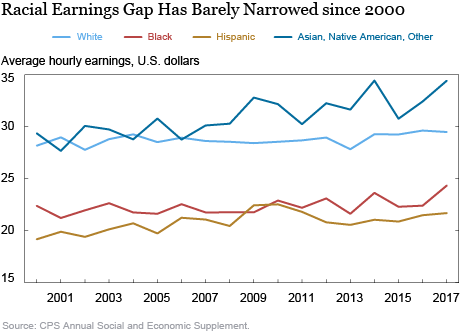 In this post, we have focused on the experiences of U.S. workers over the past two decades through the lens of earnings growth. We have investigated the evolution of earnings growth, breaking down the aggregate numbers into a more disaggregated picture. The analysis paints a nuanced picture. While there is some evidence that workers at the bottom of the earnings distribution may be catching up with those at the top of the distribution, we also find some indications that the returns to higher education may be increasing, with hourly earnings growth of college graduates outpacing that of high school graduates. Finally, we also find some evidence that—at least in recent years—hourly earnings of minority workers may be starting to catch up with those of white workers. This, together with the fact that the unemployment rate for African American workers has reached record lows, is an encouraging sign for the broadening of the current economic expansion.


René Chalom is an economics Ph.D. candidate at Columbia University.