Many Federal Reserve Facilities Include Municipal Securities
On March 23, partly as a response to the strains in the municipal markets, the Federal Reserve extended asset eligibility for the Money Market Mutual Fund Liquidity Facility (MMLF) and for the Commercial Paper Funding Facility (CPFF) to include certain short-term municipal securities. Then, on April 9, the Federal Reserve announced the establishment of the Municipal Liquidity Facility (MLF), which purchases short-term notes directly from municipal authorities. The MLF was designed not only to address the liquidity needs of municipal authorities but also with the explicit goal of supporting market functioning. In early June, Illinois became the first MLF borrower when it sold $1.2 billion of short term notes to the facility at a rate more than 1 percentage point below the rate at which it was previously able to access private markets in May. In addition, the Coronavirus Relief Fund, established through the CARES Act, provided $150 billion in federal fiscal support for state and local governments.

Secondary Market Conditions Have Stabilized
The chart below shows the yields on 30-year municipal bonds by credit rating. While Federal Reserve facilities focus on shorter-duration municipal securities, the 30-year yield is a common benchmark. Across all credit ratings, yields spiked up in mid-March: between March 2 and March 23, the yield on AAA securities jumped 1.8 percentage points. 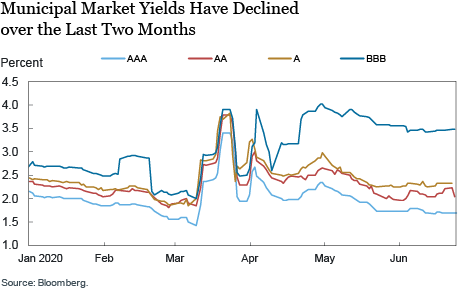 For AAA and AA securities, yields have returned to their pre-pandemic levels and are now near all-time lows. Yields on lower-rated securities (BBB and to a lesser extent A) are still somewhat higher than pre-pandemic levels, though they have been steadily declining. As a result, the spread between lower-rated (A and BBB) and higher-rated (AAA and AA) municipal securities is still higher than it was in the first two months of the year, suggesting that investors have become more discriminating.

The path of yields shows the combined effects of two policy actions: changes in the level of interest rates and the impact of Federal Reserve facilities and other government interventions. To control for changes in the level of interest rates, we show the ratios of the yields on 10- and 30-year AAA muni bonds over the yields on Treasury bonds with the same tenor (see chart below). Until March 2020, these ratios hovered below 100 percent, which is typical as most municipal securities are tax-exempt. The yield ratios spiked in March, reaching peaks of 365 percent and 252 percent on March 23, reflecting the avalanche of selling by mutual funds triggered by sell-offs of risky assets in response to mounting COVID-19 concerns. 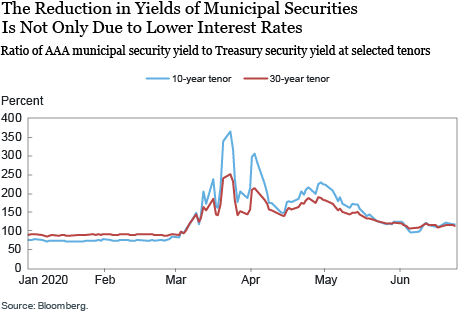 Yield ratios have now returned to close to their historical norms. Changes in secondary market yields are important because prices in the primary market are closely related to them. Facilities that support liquidity in money markets (MMLF and CPFF) and the availability of a backstop facility (MLF) have all contributed to the improvements in market functioning, as has the general improvement in risk sentiment. However, it is hard to parse the effects that each facility has had in bringing about the improvement in market functioning, especially since changes in the terms of the facilities were also made after they were announced.

It is important to note, however, that yield ratios remain above 100 percent, reflecting both the historically low level of Treasury yields and the deterioration of municipal borrowers’ financial condition since the beginning of the year. 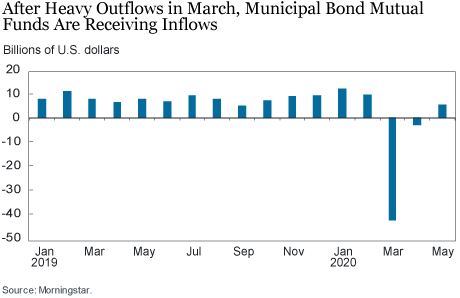 When funds experience outflows, fund managers must sell securities in order to have enough liquidity to meet redemptions. As a result, there was almost no demand for new issuance at the peak of the market disruption. Outflows slowed down markedly in April, and municipal bond mutual funds have received net inflows each week since the first week of May. The behavior of municipal bond mutual funds is similar to that of municipal money market funds, which saw heavy redemptions in March that subsided after the expansion of the MMLF to include certain short-term municipal securities.

Issuance of Municipal Securities Has Picked Up
The chart below shows weekly issuance of municipal securities in 2020 (solid line) and the range of weekly issuance for the same weeks between 2014 and 2019 (shaded area). Ordinarily, municipal issuance builds through March before taxes are due in April. In 2020, issuance began close to the top of its historical range but dropped precipitously by the end of March, remaining low through much of April. 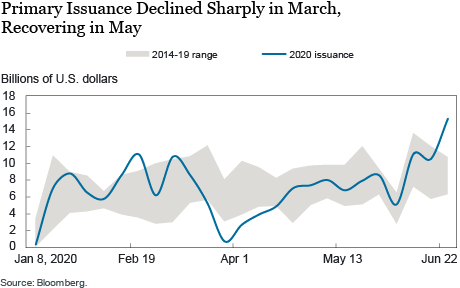 Issuance picked up again in May and June as financial market conditions improved; indeed, by the fourth week of May, cumulative issuance for the year to date exceeded (and still exceeds) its 2014-19 average. However, as the table below shows, although issuance of AAA and AA securities had recovered by May, issuance of securities rated A and below (a small fraction of overall issuance) was still below the 2014-19 average. 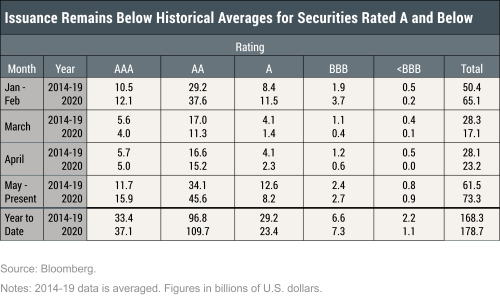 The pickup in issuance does not necessarily mean that spending by state and local authorities is at the socially efficient level. Unlike corporations, municipal governments typically operate under balanced budget requirements, which constrain or even prohibit the financing of deficits across fiscal years. Debt financing is almost exclusively reserved for capital infrastructure investments. Thus, improvements in muni debt markets are not necessarily sufficient to induce willingness to spend at the local level.

Historically, state and local governments respond to recessions by drawing down rainy day reserves, cutting expenses, and temporarily raising revenues, including taxes, rather than borrowing. While collectively these steps are contractionary from a macroeconomic perspective, individually they reflect sound fiscal policies and are one of the principal reasons for the very high credit quality of the municipal sector.

Summing Up
Both the primary and secondary markets for municipal securities underwent considerable stress during the early stages of the COVID-19 pandemic in the United States. Market conditions for municipal securities have improved significantly since then: yields for most issuers have receded to below pre-pandemic levels, outflows from municipal bond mutual funds have turned into inflows, and issuance has picked up. However, conditions remain strained relative to the start of the year, especially given the uncertainty about the path of the COVID-19 pandemic, its impact on economic recovery, and the degree of fiscal support from the federal government following the significant revenue losses experienced by state and local governments. Remaining market strains are concentrated in the riskiest segments of the municipal debt market.

Ben Hyman is an economist in the Bank’s Research and Statistics Group.

Shawn Nee is a senior analyst in the Bank’s Markets Group.

Posted by Blog Author at 10:02:22 AM in Federal Reserve, Fiscal Policy