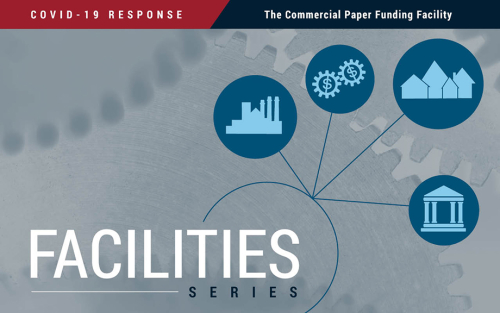 Background to the CPFF
In March, financial markets began to experience disruptions related to the outbreak of COVID-19, and the commercial paper market was no exception. Anecdotally, investors in the market were unwilling to extend credit to issuers except at very short maturities of less than five days. As the chart below shows, this reduced availability of credit coincided with yield-spread increases even for the highest-rated issuers—those with short-term credit ratings of A1 (Moody’s) or P1 (S&P)—across the maturity spectrum. This market dislocation negatively impacted companies that needed to refinance their maturing commercial paper at a time when they urgently needed liquidity to fund operational disruptions. 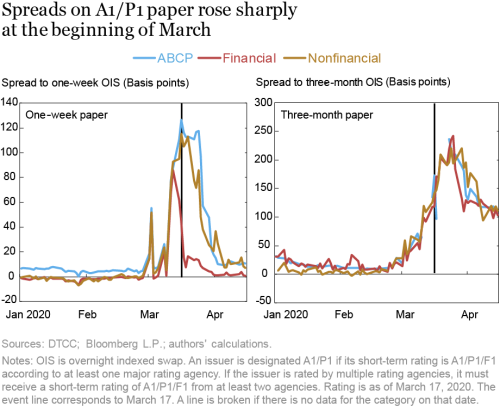 What is the CPFF?
In light of these events, on March 17, the Federal Reserve announced the CPFF. The CPFF is a temporary liquidity facility authorized under Section 13(3) of the Federal Reserve Act. It is funded with loans from the Federal Reserve Bank of New York and includes a $10 billion equity investment from the U.S. Treasury’s Exchange Stabilization Fund. The facility was announced on March 17 and began its operations on April 14. The CPFF uses a structure that is similar to the CPFF facility introduced in the wake of the collapse of Lehman Brothers in fall of 2008. The previous facility successfully ameliorated strains in the commercial paper market during the financial crisis (see this post for further information). The CPFF both supports commercial paper liquidity in the short run, by providing highly rated issuers with an alternative outlet for their current commercial paper issuance, and in the longer run, as both issuers and investors can be more confident about participating in the market knowing that issuers will be able to roll over outstanding commercial paper. By setting the rate at which it will purchase commercial paper at a premium to “normal” market pricing, the CPFF stands as a lender of last resort for the A1/P1 commercial paper market, with take-up expected to dissipate as market conditions normalize. 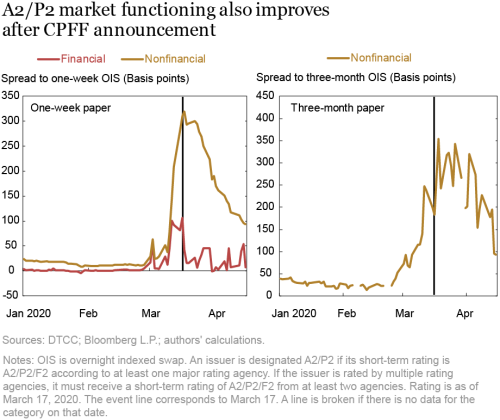 Inspecting the A1/P1 nonfinancial issuers in greater detail, we can examine whether market pricing for issuers in industries more likely to be directly affected by the COVID epidemic—such as airlines, department stores, restaurants, and hotels—has evolved in the same way as for issuers less likely to be directly affected. The next chart shows that, although spreads on one-week paper have declined for both sets of issuers since the facility announcement, the decline in spreads for more directly affected issuers has been more modest. The facility thus achieves its twin goals of supporting overall commercial paper market liquidity while allowing market participants to differentially price issuers with different risk profiles. 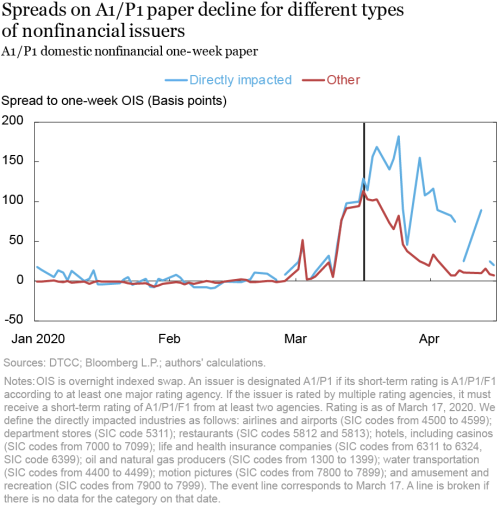 Supporting Economic Stability
Unlike CPFF usage during the 2007-09 financial crisis, current usage of the CPFF has been relatively limited. Nonetheless, the return to normal market prices documented above means that the facility is working—providing a backstop but at terms that encourage issuers to seek public market financing. While the initial disruptions to the commercial paper market appear to have subsided, the facility stands ready to help weather any additional disturbances that may emerge until the COVID-related disruptions to the economy are resolved.