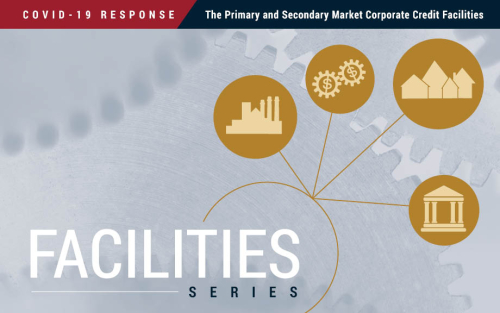 On April 9, the Federal Reserve announced that it would take additional actions to provide up to $2.3 trillion in loans to support the economy in response to the coronavirus pandemic. Among the initiatives are the Primary Market and Secondary Market Corporate Credit Facilities (PMCCF and SMCCF), whose intent is to provide support for large U.S. businesses that typically finance themselves by issuing debt in capital markets. Corporate bonds support the operations of companies with more than 17 million employees based in the United States and these bonds are key assets for retirees and pension funds. If companies are unable to issue corporate bonds, they may be unable to invest in inventory and equipment, meet current liabilities, or pay employees. Maintaining access to credit is thus crucially important during the COVID‑19 pandemic, both for issuing companies and for their employees. This post documents the dislocations in the corporate bond market that have motivated the creation of these facilities and explains how we expect these facilities to support U.S. businesses and their employees both through the COVID‑related disruptions and beyond, when the economy recovers.

What Does It Mean for a Company to Finance Itself in Capital Markets?
Large companies that need money for their operations may choose to fund themselves through debt capital markets. Funding through debt capital markets means issuing corporate bonds that are predominantly sold through public markets to individuals and institutional investors such as mutual funds, pension funds, and insurance companies. Companies use the money they borrow to fund working capital, invest in research and development, and, especially in these COVID-disrupted times, to fund their operations. Over shorter horizons (up to a few months), highly rated firms may also issue debt in the commercial paper (CP) market, whose liquidity is being supported by the Commercial Paper Funding Facility. Corporate bond issuances are significant sources of external funding for U.S. corporations—as of the fourth quarter of 2019, the Federal Reserve’s Flow of Funds data indicate that U.S. corporations have $6 trillion of corporate debt securities, such as CP and bonds, outstanding, as compared to $3.5 trillion in funding from banks and $33 trillion in shareholder equity.

If companies cannot issue bonds, they may be unable to pay employees or suppliers. At the extreme, even currently solvent corporations may be forced to default on their obligations if they cannot refinance maturing debt. If investors and customers become uncertain about a company’s ability to refinance its bonds, they may amplify distress by pulling back from companies, making it even more difficult to finance operations. He and Xiong document this concern by showing that deteriorating liquidity exacerbates rollover risk. When debt investors require compensation for liquidity risk, a firm can be pushed into default even if it were otherwise solvent. The resultant financial distress can create a vicious cycle. For example, Hortacsu et al. find that, during the financial crisis of 2007-09, increases in an automaker’s financial distress resulted in a decline in its car prices at auctions, further decreasing the company’s value as a going concern; that, in turn, increased its need for more near-term financing. Maintaining access to credit in capital markets in order to bridge the cash flow needs of companies is thus critically important during the COVID-19 disruptions period.

Disruptions in the Markets for Corporate Bonds

The chart below shows that credit spreads, a key measure of the cost of borrowing that represents the difference between the yields on corporate bonds and the yields on duration-matched U.S. Treasuries, increased across the entire credit spectrum from the beginning of March 2020. Concurrent with the increase in spreads, mutual funds and ETFs specializing in corporate bonds experienced $174 billion in outflows across the weeks of March 18 and March 25, as reported in the Investment Company Institute’s weekly flow report. After the announcement of the corporate credit facilities (CCFs) on March 23, 2020 (vertical black line in the chart), credit spreads for investment grade (IG) bonds started moderating, consistent with the facilities’ focus on providing support for IG companies. Between March 23 and April 6, credit spreads declined by around 140 basis points (bps) for bonds rated AAA, AA, and A, and by 125 bps for BBB-rated bonds. These declines were unusually sharp, representing the bottom 1st percentile of two-week changes for AAA-, AA-, and A-rated bonds and the bottom 3rd percentile for BBB-rated bonds. Flows out of bond mutual funds and ETFs also eased following the announcement and those flows turned positive in mid-April. 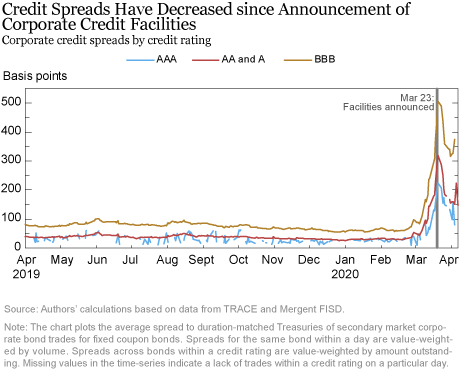 Another measure of functioning markets is liquidity as measured by bid-ask spreads. Bid-ask spreads, the difference between the price at which a dealer sells and buys from a customer, are a widely used measure of liquidity because they represent the transaction cost to buy or sell a security. These spreads spiked in March to levels not seen since the financial crisis, but then declined significantly after the March 23 announcement, particularly for IG bonds that are targeted by the CCFs. Staff estimates of the median bid-ask spread of IG and high-yield (HY) bonds increased from $0.15 and $0.25, respectively, in February to $0.70 and $0.80 in March, with IG bid-ask spreads exceeding those of HY bonds from March 17 to March 24, an atypical relationship in the corporate bond market.

Another indicator of poor market functioning is when prices for the same financial risk are different across markets. Consider the CDS-bond basis, which compares the price of a bond to the price of insurance against default from a derivative contract. Theoretically, the CDS-bond basis should be close to zero, and, over the past fifteen years, the median basis has been -19 bps for IG (-42 bps for HY). A negative basis suggests that buying exposure to credit risk through bonds is cheaper than obtaining exposure through CDS. In March, the basis widened substantially to reach levels of around -175 bps for IG bonds (and -550 bps for HY bonds) on March 23 before narrowing by around 80 (410) bps subsequently. For comparison, IG and HY CDS-bond bases reached -274 bps and -720 bps during the 2007-09 financial crisis. These breakdowns of arbitrage relations provide further evidence of market dislocation. 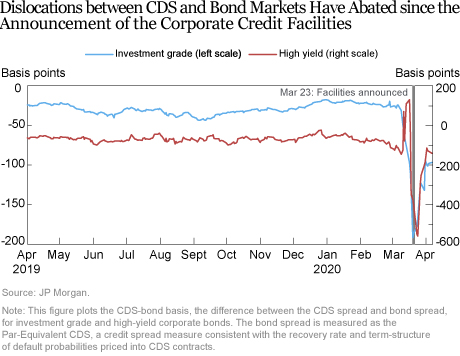 How Will These Facilities Help Market Functioning?
When companies work together with their underwriters to issue debt in the primary market, they discuss a market price that is calculated with reference to the traded prices of that company’s own debt as well as the prices of debt of similar companies in the secondary market. They then approach potential investors to build a book of interest for that debt and settle on a market-clearing issuance price. The SMCCF and PMCCF work within this market structure to ensure that U.S. companies have access to funding.

The SMCCF will purchase corporate bonds issued by creditworthy U.S. companies and U.S.-listed exchange-traded funds (ETFs) whose investment objective is to provide broad exposure to the U.S. corporate bond market. By facilitating market functioning, this facility will reduce the risk that secondary market prices are susceptible to fire sales. This will allow secondary market prices to better signal a firm’s fundamental cost of credit rather than the impact of market dislocations. In addition, seasoned bonds compete against newly issued bonds for private investors’ funds, so lower secondary market yields will decrease borrowing costs for businesses.

The PMCCF will act as a backstop for companies funding themselves both when they seek to refinance their maturing bonds and when they issue new bonds. In so doing, corporations and their investors will have confidence that they will not be forced into bankruptcy by a temporary disruption to capital markets. Financing from this facility is available at a modest penalty rate—a 100 basis point fee that is charged to issuers in order to access primary funding. The penalty fee ensures that, when markets return to normal functioning, corporations would find it more cost effective to make use of market funding instead of continuing to use the facility.

The SMCCF will purchase U.S.-listed bond ETFs and individual corporate bonds with a remaining maturity of five years or less from U.S. companies (“Eligible Issuers”) with an investment-grade rating as of March 22, 2020 and a rating of at least BB-/Ba3 as of the date of purchase, provided that issuers are not depository institutions or firms receiving specific funding under the CARES Act. The preponderance of ETF holdings will be of ETFs that provide broad exposure to U.S. investment-grade corporate bonds, with the remainder in ETFs that target U.S. high-yield corporate bonds. The PMCCF will purchase bonds at issuance with a maturity of four years or less from Eligible Issuers, either as a sole investor or by buying no more than 25 percent of a loan syndication or bond issuance when participating with other investors. The term sheets and FAQs provide additional details.

Bond Prices Are Rising Again – Do We Still Need These Facilities?
Since the initial announcement of the facilities, credit spreads on both IG and HY bonds have narrowed by about 125 bps and 300 bps, respectively. That said, the level of spreads is still elevated relative to historical values. Secondary market functioning has continued to improve and staff estimates of bid-ask spreads have begun to normalize. Issuance in the primary market, which sputtered in February, has rebounded, with $625 billion of IG corporate bonds issued between March 23, 2020 (when the facility was announced) and May 20, 2020.

The improvement in market functioning since the announcement of the facilities provides evidence of the continuing importance of the liquidity backstop, insuring that these companies will have access to funding as long as they remain solvent. In no small part, the return of market functioning is associated with the presence of a backstop ensuring that temporary market dislocations do not result in solvent companies becoming bankrupt.

Supporting Economic Stability
The Federal Reserve undertakes lending in “unusual and exigent circumstances” to respond to severely stressed market conditions and to restore economic stability. The PMCCF and SMCCF programs are designed to provide broad-based support for large, creditworthy U.S. employers, while incentivizing these companies to return to funding themselves in capital markets once conditions normalize. Although the initial disruptions to these markets appear to have subsided, the facilities stand ready to help dampen any additional disturbances that may emerge until the pandemic crisis is resolved.

Richard Crump is a vice president in the Bank’s Research and Statistics Group.

Posted by Blog Author at 07:00:00 AM in Financial Institutions, Financial Markets, Pandemic