« The Primary and Secondary Market Corporate Credit Facilities | Main | Job Training Mismatch and the COVID-19 Recovery: A Cautionary Note from the Great Recession » 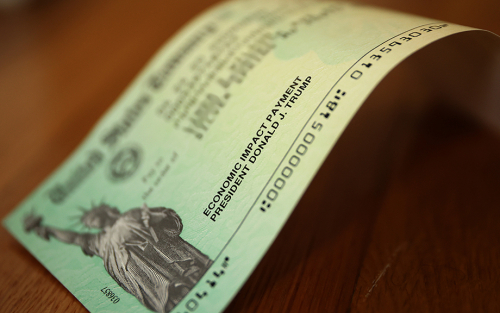 The New York Fed’s Center for Microeconomic Data released results today from its April 2020 SCE Public Policy Survey, which provides information on consumers’ expectations regarding future changes to a wide range of fiscal and social insurance policies and the potential impact of these changes on their households. These data have been collected every four months since October 2015 as part of our Survey of Consumer Expectations (SCE). Given the ongoing COVID-19 pandemic, households face significant uncertainty about their personal situations and the general economic environment when forming plans and making decisions. Tracking individuals’ subjective beliefs about future government policy changes is important for understanding and predicting their behavior in terms of spending and labor supply, which will be crucial in forecasting the economic recovery in the months ahead.

The April SCE Public Policy Survey, which was fielded between April 2 and 30, shows large movements in consumers’ expectations regarding future changes in several assistance and social insurance programs as well as in taxes and fees. Starting with assistance programs, the chart below shows the average percent chance that respondents assign to an expansion over the next twelve months in affordable housing, federal student loan forgiveness, and the generosity of federal welfare benefits. All three series reached new highs in April, but the average likelihood of an increase in federal welfare benefits logged the biggest jump—around 20 percentage points—since December 2019. The large increases in the expected expansions for federal student loan forgiveness and welfare programs were broad-based across demographic groups. Interestingly, the change in expectations for a year-ahead expansion in affordable housing from December 2019 to April 2020 was much more muted for lower-income (less than $60,000) households at 4.9 percentage points, compared to higher-income households at 15.8 percentage points. 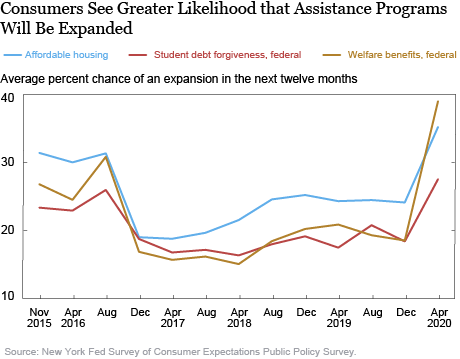 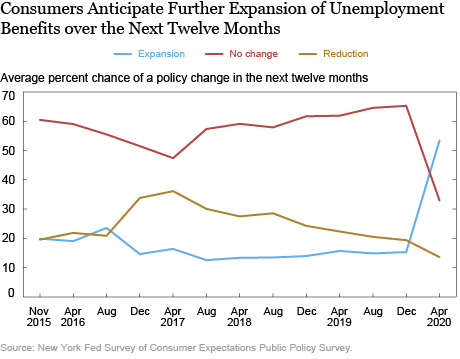 The SCE Public Policy Survey also collects information on what respondents think the household impact of various policy changes over the next twelve months would be. Unsurprisingly, given the COVID-19 outbreak and the business closures necessitated by social distancing measures, April data show a broad-based rise in the share of respondents that associate a positive impact with an increase in unemployment benefits—16.3 percent in April 2020, up from 5.6 percent in December 2019. Similarly, we see a reduction in the share of respondents who expect to be negatively affected by an increase in welfare benefits, from 19.9 percent to 11.0 percent. Finally, the share of respondents who expect to be positively affected by a decrease in the payroll tax rate increased from 47.0 percent to 52.6 percent.

The timing and strength of the economic recovery from the COVID-19 pandemic will largely depend on households’ economic decisions regarding spending, saving, and working. These decisions, in turn, are affected by the current and future policy environment. The results from the April 2020 SCE Public Policy Survey show that households increasingly anticipate further fiscal expansions in government support, with consumers assigning higher likelihoods to expansions in affordable housing, federal student loan forgiveness, and in the generosity of unemployment and welfare benefits. We will continue to monitor households’ public policy expectations as the pandemic and the policy responses to it evolve.