Job Training Mismatch and the COVID-19 Recovery: A Cautionary Note from the Great Recession 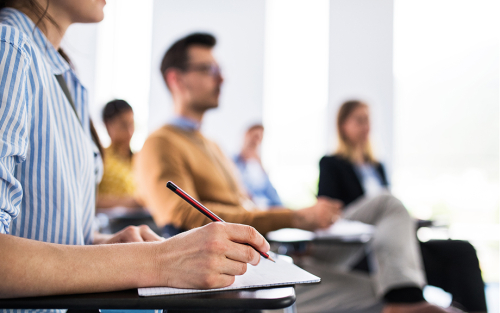 Displaced workers have been shown to endure persistent losses years beyond their initial job separation events. These losses are especially amplified during recessions. (1) One explanation for greater persistence in downturns relative to booms, is that firms and industries on the margin of structural change permanently shift the types of tasks and occupations demanded after a large negative shock (Aghion et al. (2005)), but these new occupations do not match the stock of human capital held by those currently displaced. In response to COVID-19, firms with products and services that complement social-distancing (like Amazon distribution centers) may continue hiring during and beyond the recovery, while workers displaced from higher risk industries with more stagnant demand (for example, airport personnel, local retail clerks) are left to adjust to less familiar job opportunities. As some industries reopen gradually while others remain stunted, what role might workforce development programs have in bridging the skill gap such that displaced workers are best prepared for this new reality of work?

Returns to Job Training Over the Business Cycle

To examine the role of workforce development programs, we studied earnings recovery paths and occupation choices for participants in Trade Act related retraining programs before and during the Great Recession, assembling trainee data from Hyman, Kovak, and Leive (2020), Park (2012), and Reynolds and Palattuci (2012). We first compared wage replacement rates—the fraction of pre-layoff earnings “replaced” as workers recover from job loss—for displaced workers who jointly enrolled in retraining programs and extended unemployment insurance (UI), to a control group that was approved for the same package but “waived out” of the training component and only received extended UI. These waivers are most often offered when workers claim to already possess the skills needed by the labor market or no suitable training program is available to workers in their desired vocation due to capacity constraints.

We implement an event study model with worker demographic controls and quarter-of-application fixed effects, which enables us to trace out returns to the retraining component from UI several quarters around a worker’s displacement event. Although our goal is not causal, to the extent that differences in worker selection into training and UI-only groups are captured by time-invariant worker characteristics and calendar quarter fixed effects capturing group-specific demand factors, this allows us to cautiously interpret these descriptive results. Below, we show these estimates separately for workers laid off in normal times versus those who were displaced during the downturn. 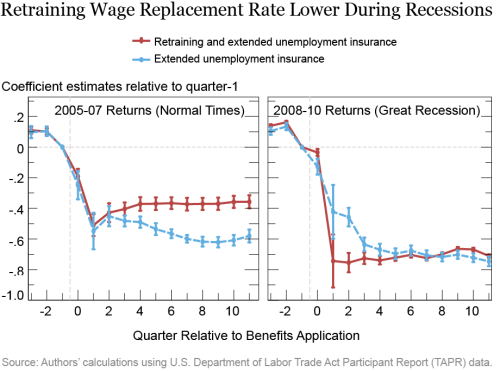 The results suggest a striking story: Although, on average, all worker groups only partially recovered from their initial layoff in the short run, those who retrained (red series) only exhibited better outcomes when the economy was steaming ahead in normal times. Why did job training through the Trade Act program appear less effective during the Great Recession?

One natural explanation for this result might be that workers committing to lengthy retraining programs face a penalty for entering increasingly competitive labor markets late. Indeed, Rothstein (2012) finds that most of the sluggish recovery can be explained by aggregate demand factors. Here, we explore an alternative hypothesis: During the Great Recession, some workers trained for the “wrong” occupations because workforce development programs could not predict the permanence of rapidly changing skills demanded in the post-recession economy—we call this job training mismatch.

To test whether job training mismatch correlates with differential earnings returns over the business cycle, we follow the pioneering work of Şahin et al. (2014) and construct a mismatch index intended to capture the extent to which occupations targeted in retraining programs “match” the composition of newly posted online job vacancies using data from The Conference Board Help Wanted OnLine® (HWOL). Our reduced form index creates a measure in each quarter t, capturing whether currently targeted occupations are under- or over-training for a given labor market’s occupational needs, calculated as follows:

Here, the innermost term considers the difference in the share of vacancies posted in a given occupation o versus the share of total trainees targeting that same occupation, which are then weighted by the number of trainees in each occupation (wogt). An index value of 0 would reflect a “perfectly matched” labor market, whereas any departure from 0 would be mismatched. We also include a geography term g so that we can decompose the overall index by more refined geographies (assuming job seekers are constrained to those markets). The chart below plots this mismatch index for three-digit SOC occupation codes over quarters, both for the U.S. labor market as a whole, and weighting by mismatch in each state. 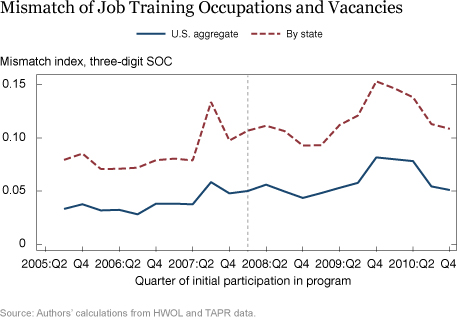 The time series shows that the index nearly doubled from its pre-recession trough to post-recession peak, suggesting that Great Recession job training programs were not meeting the occupational needs of their labor markets. To dissect this further, we computed the mismatch index separately within each state, and allowed the index to be positive or negative (removing the absolute value). This allows for the convenient interpretation that we can study whether distinct labor markets were over- or under-training with respect to jobs demanded.

In the chart below, we show these results for the top twenty-five trainee states (which cover over 90 percent of all trainees), where the size of each bubble corresponds to the share of trainees in each period (pooled pre- and post-recession). 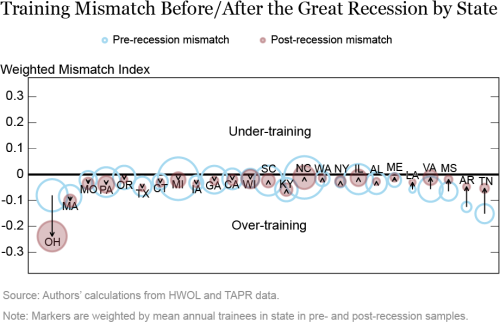 Analyzing training mismatch by state reveals that a handful of states, such as Ohio, drive the overall results. In fact, these results are particularly influenced by one occupation: production workers (including metal and plastic). Interestingly, the plot also reveals that all states over-trained on average with respect to occupational demand, although some individual occupations like computer programmers did train a lower share of workers relative to vacancies. (We find that 28 percent of workers were in occupations exhibiting such “under-training”.) These results are consistent with prior work in Hyman (2018), which showed that workers retraining in their separation industries were not recalled at the rate they were expecting, whereas those that switched industries and labor markets performed better. Simply put, in occupations and labor markets that never completely recovered from the recession, training programs also failed to adjust fully to new demand.

While the result discussed here is largely negative, it highlights the difficulties in adjusting workforce development programs to uncertain structural changes in occupational demand. Although a handful of states improved their targeting, COVID-19 mismatch is likely to be more widespread than trade-impacted industries during the Great Recession. One alternative to making workforce development programs more nimble, as suggested by a number of authors and policymakers (see a summary here), is to instead provide “wage insurance” cash transfers that subsidize some of the difference between prior and new jobs if the latter pays a lower wage. In ongoing work, Hyman, Kovak, and Leive (2020) are exploring the effects of such programs in the context of the Trade Adjustment Assistance program which, since 2002, has offered workers over the age of 50 up to $10,000 in such transfers as an alternative to retraining.

(1) Autor et al. (2016) and Sullivan and Von Wachter (2009) estimate the long-run persistence of displacement on earnings and mortality rates, while Schmieder et al. (2016) study effects across the business cycle.

Benjamin G. Hyman is an economist in the Federal Reserve Bank of New York’s Research and Statistics Group.


Karen X. Ni is a senior research analyst in the Bank’s Research and Statistics Group.