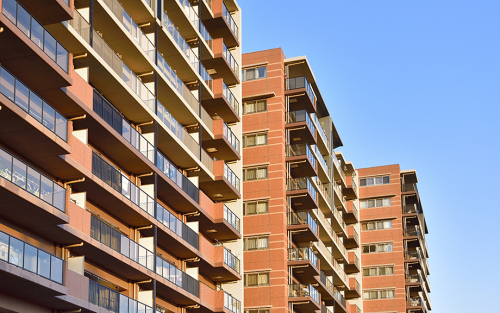 Agency CMBS are primarily securitizations of multifamily residential properties, typically apartment buildings or complexes with five or more rental units. The multifamily real estate market accounts for a significant portion of households in the United States, providing housing to about one-half of the nation’s 44 million rental households. As opposed to single-family houses that are often occupied by homeowners, multifamily properties are typically owned by individuals or companies as investments. Multifamily property owners often borrow to purchase the properties or refinance existing mortgages, and rely on tenant rent payments and associated fees to service the mortgage payments.

Similar to the much-larger agency MBS market that supports financing to homeowners in the single-family housing market, the agency CMBS market facilitates multifamily mortgage lending by allowing lenders to sell mortgage loans to the agencies (Fannie Mae, Freddie Mac, and Ginnie Mae). At a high level, these agencies package the mortgages into securities and guarantee principal and interest payments of those securities. Broker dealers facilitate selling the securities to investors, such as banks and asset managers.

Agency CMBS outstanding total around $750 billion, and account for 47 percent of the $1.6 trillion in total multifamily mortgage debt outstanding. (The remainder is financed through the non-agency CMBS market and non-securitized loans from financial institutions.) The agency CMBS market has grown rapidly in the last decade, from about $130 billion in 2010, along with the growth of the agency multifamily lending programs. Major agency multifamily CMBS securitization programs include Fannie Mae’s Delegated Underwriting and Servicing (DUS), Freddie Mac’s K-Series, and Ginnie Mae’s Project Loans.

In March, conditions in the agency CMBS market became severely disrupted amidst extraordinary financial market stress related to the outbreak of COVID-19. Uncertainty about the potential economic impact of the pandemic led to rapid selling of risk assets and a deterioration in market liquidity. The yield spreads of agency CMBS to the swap curve widened significantly as shown in the chart below, with average agency CMBS spreads widening from about 55 basis points in mid-February to about 120 basis points on March 20. Rapid spread widening in agency CMBS resulted in the need for leveraged investors to liquidate positions, worsening liquidity conditions. In this environment, broker dealers, the main intermediaries of agency CMBS, sought to reduce their risk and worsened the terms at which they would provide liquidity. New issuance of agency CMBS stalled, threatening to reduce credit availability in the multifamily housing sector. 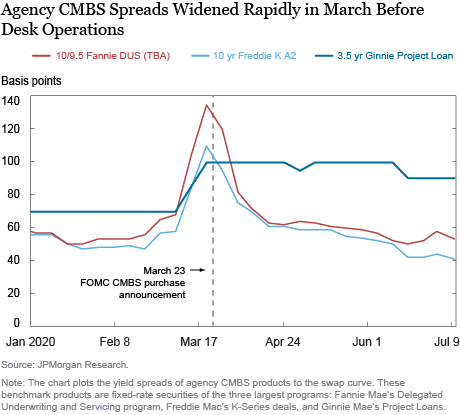 The Desk purchases, which began on March 27, are authorized under the terms of Section 14 of the Federal Reserve Act, which allows for purchases of securities that are fully guaranteed by agencies of the United States. Operations have targeted three main sectors of the market, Fannie Mae DUS, Freddie Mac 10-year K Series, and Ginnie Mae Project Loans, with a focus on key benchmark security types within those sectors. This approach was designed to improve liquidity in critical market segments, and that these improvements could then spill over more broadly in the agency CMBS market. Operations are scheduled regularly and solicit competitive offers from a range of primary dealer counterparties. Offers are assessed relative to a measure of estimated fair value. Program Terms and Conditions and FAQs are available on the public website. 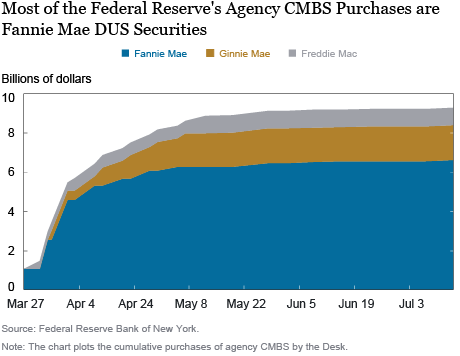 Second, the next chart shows that market liquidity as measured by bid-ask spreads has improved substantially. A sample of bid-ask spreads collected from selected dealers indicate that they have returned to the February levels for both Fannie Mae and Freddie Mac securities. 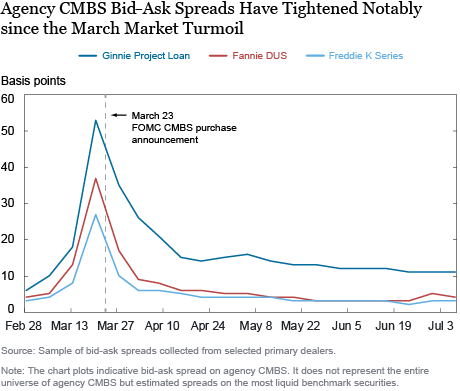 Third, new issuance of agency CMBS resumed in April, allowing for the resumption of credit flow to the multifamily housing sector, although year-to-date issuance volumes for Fannie Mae and Freddie Mac are still lower than over the same period in 2019.

Finally, results from Desk operations indicate that the selling pressures in CMBS have subsided substantially. Over the course of the purchase operations, the total amount of offers submitted and the share of competitively priced offers have declined, leading to lower total purchase amounts, as shown in the last chart below. In the first of several operations, the total amount of offers submitted far exceeded the maximum purchase amount, particularly for the Fannie Mae and Ginnie Mae operations. In addition, the offers were competitive relative to fair market value, suggesting significant interest to sell securities. Recent purchase amounts have been declining as the competitiveness of the submitted offers has declined. Despite the small size of current purchases, market participants have suggested that the presence of these operations have provided assurance against the potential for future shocks. 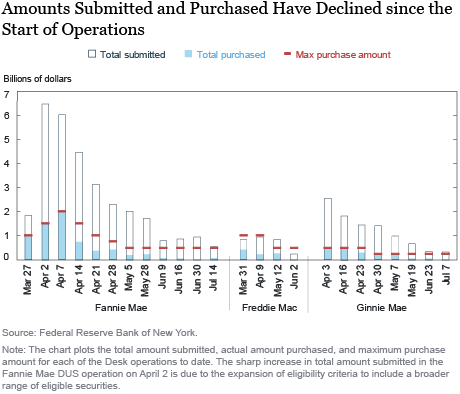 Woojung Park is a senior associate in the Federal Reserve Bank of New York’s Markets Group.

Julia Gouny is an officer in the Bank’s Markets Group.

Haoyang Liu is an economist in the Bank’s Research and Statistics Group.

It appears that by Agency metrics this CMBS program has been a success and that some $8 – $10 Billion in purchases have been made which results in a smoothly functioning CMBS Market. Why not sell – on a market-rational basis – the portfolio of Agency-backed securities back into the market, now, that it might resume its normal market functions without fed participation. The fact the program remains alive should prevent any market shenanigans from coming back into play. Programs of this type should be limited to what is necessary to accomplish the objectives of the program. Thanks.