« Who Has Been Evicted and Why? | Main | Do College Tuition Subsidies Boost Spending and Reduce Debt? Impacts by Income and Race » 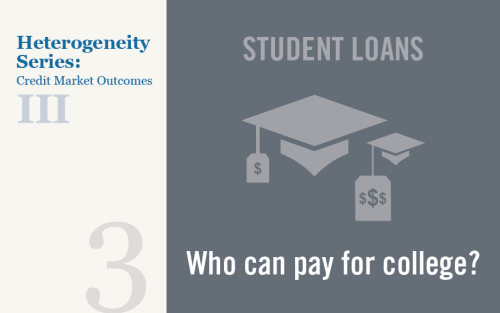 Across the United States, the cost of all types of higher education has been rising faster than overall inflation for more than two decades. Despite rising costs, aggregate undergraduate enrollment rose steadily between 2000 and 2010 before leveling off and dipping slightly to its current level. Rising college costs have steadily increased dependence on student debt for college financing, with many students and parents turning to federal and private loans to pay for higher education. An earlier post in this series reported that borrowers in majority Black areas have higher student loan balances and rates of default than those in both majority white and majority Hispanic areas. In this post, we study how differences in college attendance rates and in the types of colleges attended generate heterogeneity in loan experiences. Specifically, using nationwide data, we analyze heterogeneities in college-going and heterogeneities in student debt and default experiences by college type across individuals living in majority Black, majority Hispanic, and majority white zip codes.

Our analysis uses a nationwide data panel that links students’ educational records with their debt outcomes. We leverage a unique merger between two large datasets: the New York Fed Consumer Credit Panel (CCP) and the National Student Clearinghouse (NSC). The CCP consists of anonymized consumer credit records sourced from the Equifax credit bureau, while the NSC comprises individual-level postsecondary education records. Though the NSC currently covers 97 percent of all college enrollments, the coverage rate was less complete for cohorts that attended college before the mid-1990s. We therefore focus our analysis on individuals in our CCP-NSC data set that were born between 1980 and 1984, both to maximize coverage and ensure that we can observe debt outcomes for each individual up to age 30.

In results not shown, we apply the same analysis to people living in the nation’s largest metropolitan areas. New York-area residents attend two-year colleges less frequently, and four-year colleges more frequently, than the national averages for each zip code category. New York City has a massive public university system with several four-year campuses, which may help explain area residents’ propensity for pursuing four-year degrees over two-year ones. Los Angeles lags only marginally behind New York in four-year attendance rates in majority white areas, but lags significantly behind New York in this rate for majority Hispanic and majority Black areas. However, Los Angeles has a much higher two-year college attendance rate than New York in each zip code category. 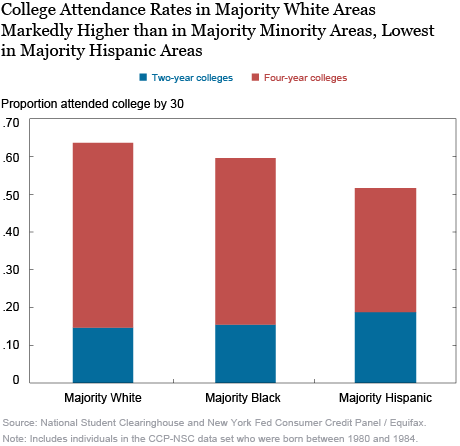 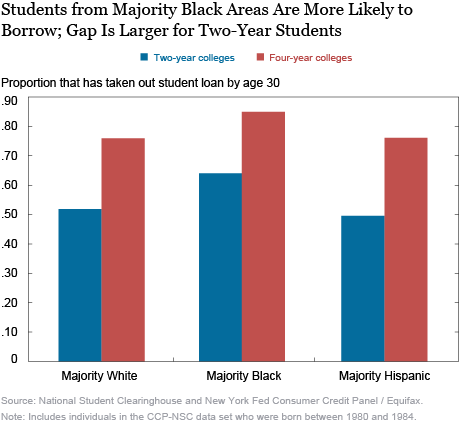 Lastly, we examine student debt default and find significant differences across school type, geography, and demographics. Borrowers who attend two-year colleges have uniformly higher default rates by age 30. As shown earlier, two-year attendees are less likely to borrow, but here we see that the debt they take on is riskier. The default patterns for two-year and four-year attendees are starkly different: nationwide, borrowers who went to two-year schools default almost 50 percent more often than their four-year counterparts in majority Black, majority Hispanic, and majority white areas alike. 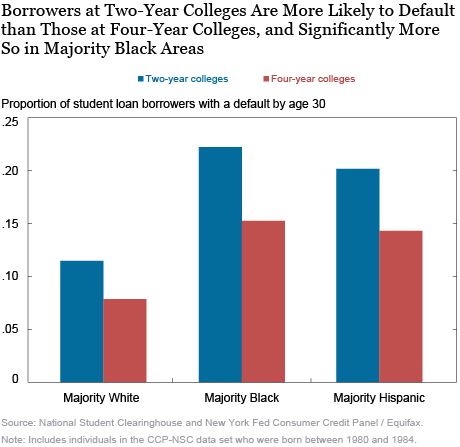 This post reveals that headline statistics paint a far from complete picture of college attendance, student debt, and default rate trends, which vary considerably across demographic groups. While individuals in majority Black and majority Hispanic areas have lower college attendance rates than those in majority white areas (a reflection of significantly lower four-year college attendance rates), students from majority Black areas have a markedly higher propensity to take out student loans and students from majority Black and majority Hispanic areas have a considerably higher propensity to default on those debts. We also find that two-year college students are less likely to borrow but more likely to default, conditional on borrowing. These disparities in debt and default patterns are stark and it is important to better understand the underlying reasons for these differences—a challenge we will take on in future work.