Debt Relief and the CARES Act: Which Borrowers Face the Most Financial Strain? -Liberty Street Economics

« Debt Relief and the CARES Act: Which Borrowers Benefit the Most? | Main | Market Function Purchases by the Federal Reserve » 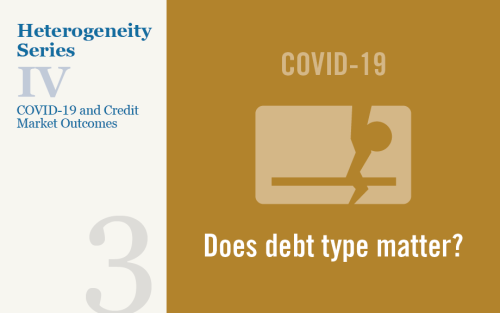 In yesterday's post, we studied the expected debt relief from the CARES Act on mortgagors and student debt borrowers. We now turn our attention to the 63 percent of American borrowers who do not have a mortgage or student loan. These borrowers will not directly benefit from the loan forbearance provisions of the CARES Act, although they may be able to receive some types of leniency that many lenders have voluntarily provided. We ask who these borrowers are, by age, geography, race and income, and how does their financial health compare with other borrowers.

Who is Without Mortgage and Student Debt?
To understand the distribution of borrowers who will be ineligible for the debt relief provisions of the CARES Act, we draw on the New York Fed’s Consumer Credit Panel—a nationally representative sample of Equifax credit report data. Our data set for this post includes a representative 1 percent sample of the nation’s adults with credit records in anonymized form.

The map below shows the (adult) population-weighted geographic (zip code) distribution of the share of the population with neither mortgages nor student debt. Each bin represents 1/4 of the U.S. adult population, so one quarter of adults live in zip codes where less than 60 percent have a student loan or mortgage, while another quarter lives in zip codes in which more than 75 percent have neither type of debt. The darkest-colored bin, where more than 75 percent of people are borrowers with neither a student loan nor mortgage, dominates by land area: 40 percent of all zip codes fall in the top quartile, indicating that these zip codes are less populated than those with higher rates of mortgage and student debt. Spatially, the borrowers without mortgages and student debt largely live in rural areas and they constitute a higher share of the borrowers in rural areas: 74 percent of Americans living in rural areas are in this category, versus 68 percent of people living in MSAs (urban areas). 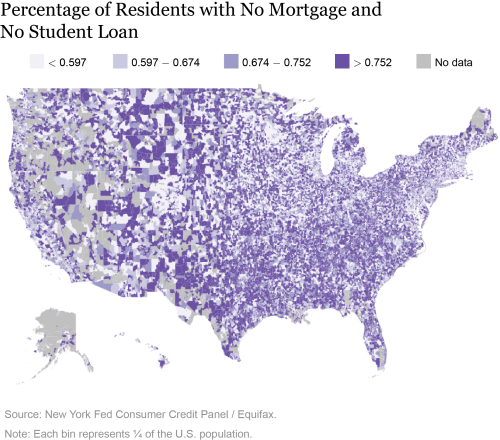 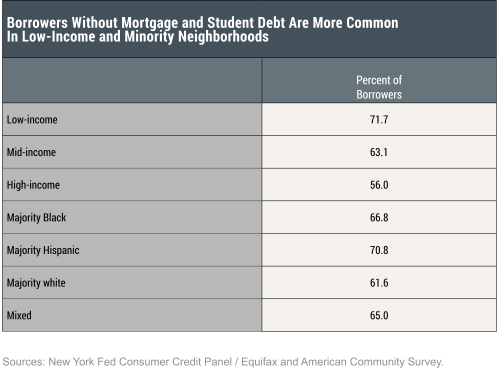 Borrowers who carry loans other than mortgages or student debt have lower credit scores (as captured by Equifax risk scores) than other borrowers, as we see in the table below. The median Equifax risk score for this group is 669 while the median risk score of all individuals with any debt is 700. To further understand the state of financial health of this group of borrowers, below we present the proportions of borrowers in this category who are delinquent on credit card payments by at least 90 days or in collection, conditional on having credit card debt. We find that 11.6 percent of this group of borrowers are more than 90 days delinquent on their credit card debt (last row). This compares with an overall delinquency rate, of 9.9 percent in our sample for credit card debt.

We find that older borrowers with loans other than mortgages and student debt are in better financial health than working-age borrowers. This reflects the fact that older people have often paid off their mortgages and student debt, while younger people without mortgages or student loans often had never owned a home. Regardless, these borrowers will not receive debt relief under the CARES Act forbearance provisions, although they can receive relief from its other provisions, such as direct stimulus checks. 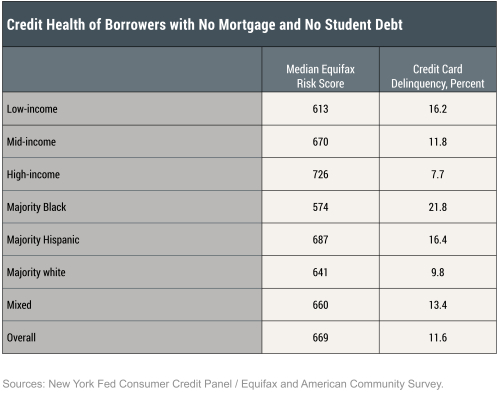 In this post, we have focused on borrowers who carry debt other than mortgages and student loans, and therefore, will not directly benefit from the debt payment moratorium provisions under the CARES Act. We find that these borrowers are likely to be older than those holding mortgage and student debt, and more likely to be concentrated in low income, majority Black and majority Hispanic neighborhoods. They are more likely to be in financial distress than other borrowers, as captured by credit card delinquency rates. Further, as revolving debts are important for smoothing gaps in income, borrowers with already-delinquent credit card accounts are unlikely to be able to lean on these accounts to smooth consumption. Given this, relief from other parts of the Act, such as unemployment insurance and stimulus checks, will therefore be particularly important in mitigating the crisis' impact on the financial health of these borrowers.

Posted by Blog Author at 07:00:00 AM in Credit, Demographics, Household Finance, Inequality, Pandemic