The repo market faced extraordinary liquidity strains in March amid broader financial market volatility related to the coronavirus pandemic and uncertainty regarding the path of policy. The strains were particularly severe in the term repo market, in which borrowing and lending arrangements are for longer than one business day. In this post, we discuss the causes of the liquidity disruptions that arose in the repo market as well as the Federal Reserve’s actions to address those disruptions.

Overnight and Term Repo Markets
As described in this Staff Report, the repo market serves in part to transfer liquidity from cash investors to cash borrowers, with securities dealers acting as intermediaries. In addition, dealers typically finance a substantial portion of their securities inventory through repo. A number of investors, the largest of which are money market mutual funds (MMFs), lend cash to dealers. Other major cash lenders include commercial banks and the government-sponsored enterprises. Across all segments and collateral types, the repo market is nearly $4.0 trillion in size, with more than $1.0 trillion in overnight Treasury repo alone.

The repo market is important given its size and scale as well as its role in providing funding for Treasury debt and other securities. Additionally, the Secured Overnight Financing Rate (SOFR), a broad measure of overnight Treasury repo rates, is the Alternative Reference Rates Committee’s preferred alternative to USD LIBOR (the London interbank offered rate).

We focus here on the general collateral repo market, in which funding is provided against a broad set of acceptable high-quality collateral, rather than a specific asset. Repo against particular, specified assets is referred to as “specific-issue” or “specials” trading. While general collateral repo is typically aimed at borrowing cash against a portfolio of securities, specials trading is associated with obtaining securities.

Liquidity in the term general collateral market is lower than in the overnight market for several reasons. The Securities and Exchange Commission mandates that domestic MMFs keep 30 percent of their assets liquid on a weekly basis, including repos that mature in seven days or less, and 10 percent liquid on a daily basis, including overnight repos. In practice, MMFs hold buffers above these minimums. Moreover, MMFs invest sparingly in term repo because they prefer to hold term exposures in Treasury bills. Bills are direct obligations of the U.S. government and even longer-term bills count as daily liquid assets.

March Liquidity Strains in the Repo Market
In March 2020, economic and policy uncertainty related to the coronavirus pandemic, combined with pressures on dealer balance sheets, led to severe disruptions in the repo market.

Extreme economic uncertainty caused many market participants, such as asset managers and central banks, to exit Treasury positions to raise liquidity as volatility rose sharply. Broker-dealers, such as the primary dealers, make markets in Treasury and other securities: they purchase securities from sellers, holding an inventory over time, and ultimately sell securities to market participants looking to buy. Given the substantial sales in March, dealer inventories rose notably, particularly in Treasury coupons, as shown in the chart below. 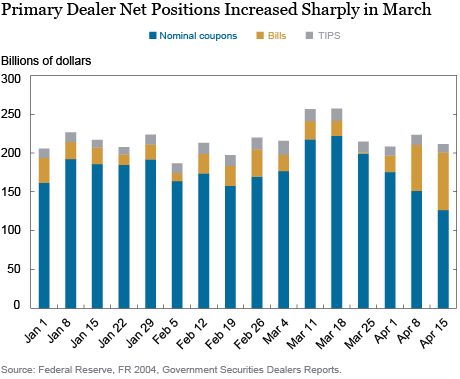 Market participants were particularly attentive to unwinding of Treasury cash-futures basis trades, which further contributed to term repo market illiquidity. A significant portion of Treasury term repo cash borrowing by hedge funds is to finance Treasury collateral when engaging in such basis trades. These funds sell a Treasury through a futures contract and purchase a similar Treasury security outright, which they fund using term repo until the security must be delivered in the futures contract. As term repo liquidity deteriorated and pricing increased, the economics of long-basis trades worsened, prompting more outright Treasury sales to dealers as these trades were unwound, further impairing dealer intermediation. (See this Liberty Street Economics post and BIS Bulletin for more details.)

The high level of uncertainty contributed to greater disruption in the term market than in the overnight market for several reasons.

Uncertainty regarding the near-term path of policy also contributed to the term repo market strains. After the Federal Open Market Committee lowered the target range for the federal funds rate by 50 basis points on March 3, to 1–1.25 percent, repo market participants reported considerable uncertainty about the timing of further policy rate changes given the uncertain economic outlook. While typical term repo cash borrowers were looking to borrow at term rates that priced in further rate cuts, term repo lenders were reluctant to lend cash at rates substantially lower than prevailing overnight rates, as overnight markets provided an attractive and liquid alternative. Indeed, term repo cash lending by banks declined notably in March. The reduction in the target range to 0–0.25 percent on March 15, together with forward guidance regarding the target range, decreased uncertainty about the Federal Reserve’s policy path.

Another factor likely contributing to the poor liquidity conditions was the approaching March quarter-end. Period-end dates typically see elevated term repo activity, as accounts reliant on repo financing may “term out” their borrowing to avoid being exposed to potential overnight funding pressure on the reporting date itself. For much of March, funding for the quarter-end date was as high as 1.3 percent even as overnight repo rates moved closer to zero.

As a result of the factors noted above, along with the shift to a work-from-home environment, term Treasury repo rates moved as high as 60 basis points above the overnight indexed swap (OIS) rate for tenors greater than a month, whereas they typically trade at a spread of 5 to 10 basis points above OIS; the next chart illustrates this volatility. Bid-ask spreads on term repo products were consistently very wide, reflecting the increased intermediation costs. Though total term repo volumes were little changed, the tenor of new exposures shortened. 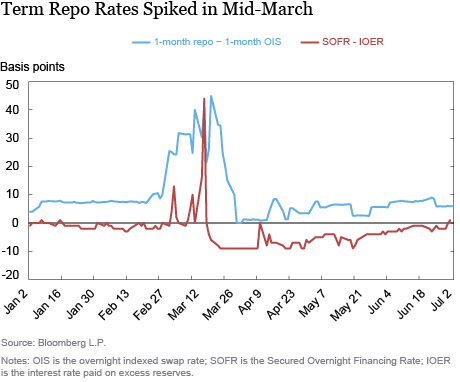 The Fed’s Response Improves Term Market Liquidity
In response to the poor repo market liquidity conditions, the Desk increased the size and frequency of its repo operations. Specifically, it introduced a second daily overnight repo operation; increased the frequency of term repo offerings while introducing one- and three-month term repo operations; and increased to $500 billion the amount offered in each overnight, one-month, and three-month term repo operation. Market participants noted that the adjusted operational parameters provided a welcome signal that the Federal Reserve stood ready to provide whatever liquidity was needed, and they broadly interpreted the $500 billion maximum size as indicating a full-allotment offering.

Even though the minimum bid rates of Federal Reserve term repo operations were in line with similarly dated products that reflected expectations around the policy path, primary dealer participation in Desk term repo operations was fairly subdued, which market participants attributed to the aforementioned intermediation constraints. While term repo conditions improved somewhat following the start of the large-scale repo operations, contacts generally attributed the broader, sustained improvement to the secondary-market asset purchases, which had helped to address dealer intermediation constraints.

Term repo market conditions have improved substantially since the end of March. Volumes, bid-ask spreads, and pricing relative to OIS are consistent with historical averages, with the term general collateral curve mostly flat through the end of 2020. In response, the Desk has gradually reduced the total amount of Desk repo offered and the number of overnight and term operations in successive repo operation schedules. In June, the Desk raised the minimum bid rates for overnight and term repo operations, which led to subsequent declines in usage.

To Sum Up
The U.S. repo market suffered severe strains in the second half of March, due in part to the heightened uncertainty related to the coronavirus pandemic, which affected financial markets broadly, and in part to some factors specific to the repo market, such as the increase in dealer inventories and the unwind of Treasury cash-futures basis trades. The Federal Reserve responded by increasing the frequency, offering sizes, and terms of its repo operations and by purchasing a large quantity of Treasury and agency securities in the secondary market, reducing pressures on dealer balance sheets. These operations appear to have been successful in restoring functioning in these important financing markets.

Kevin Clark is a senior associate in the Federal Reserve Bank of New York’s Markets Group.

Posted by Blog Author at 07:00:00 AM in Central Bank, Financial Markets, Pandemic

This is a very good subject and one which we will see more comments on.

We continue to see liquidity issues in some areas.

We shall see a more severe liquidity issue in the future, project within the next 12 months.