Quarter-end reporting might create incentives for banks to temporarily adjust their balance sheet—decreasing leverage around quarter-end dates and increasing it on other days, for example. These dynamics have been discussed in academic research, by New York Fed officials, most recently in a speech by Simon Potter, the head of the Bank’s Markets Group, and in a recent blog post on plans for future general collateral repo reference rates. A recent report published by the Committee on the Global Financial System provides a more global view on the effect of regulation on repo markets.

The U.S. repo market provides a useful setting to look at quarter-end dynamics for several reasons. We have good data on this market and it has several segments in which we can observe differences that help highlight the economic mechanisms at play. The U.S. repo market is also very liquid, which makes it easy for banks to temporarily reduce balances. Finally, repo transactions, particularly those backed by Treasury securities, are very safe; hence, they are quite likely to be affected by the leverage ratio. Indeed, because these transactions are so safe, their effect on the size of a bank’s balance sheet, when weighted by risk, is small. However, by design the leverage ratio treats all bank assets equally, regardless of risks. Very safe transactions have a low return and are thus less attractive to banks than other activities that have higher risk and a higher return, if the leverage ratio binds.

Tri-Party Repo
We first look at the tri-party repo market, where large investment banks obtain cash against their inventory of securities, or the securities of their clients. Here we use the term “bank” to include securities dealers, most of which are part of regulated banking organizations. We exclude interbank transactions—cleared through the General Collateral Finance Repo Service (GCF Repo®, hereafter GCF Repo)—which are considered separately below. Our expectation is that institutions that report quarter-end snapshots will reduce their repo borrowing around these days as they reduce the size of their balance sheet, and that institutions that report daily averages over the quarter will either keep the same level of activity or, perhaps, increase their activity to pick up some of the slack. The chart below provides strong evidence that euro area and Swiss (hereafter European) banks pull away from the tri-party repo market around quarter-end dates, while we see little change for institutions from other jurisdictions. Perhaps surprisingly, we do not observe much change in behavior among Japanese banks, which are included in the “Other” category. This is consistent with the work of Ben Munyan, who also observes much larger swings in repo borrowing for European banks. As European banks sharply decrease their demand for cash around quarter-end dates, we would expect, all else equal, that the repo rate would decrease as lenders compete by lowering the rate that they are willing to accept to invest cash with the remaining borrowers. Instead, the preceding chart shows that the Fed’s overnight reverse repo (ON RRP) program reduces the disruptions this retrenchment might otherwise cause by accepting the cash that lenders cannot invest otherwise. As a result, repo rates remain stable, as shown in the chart below. 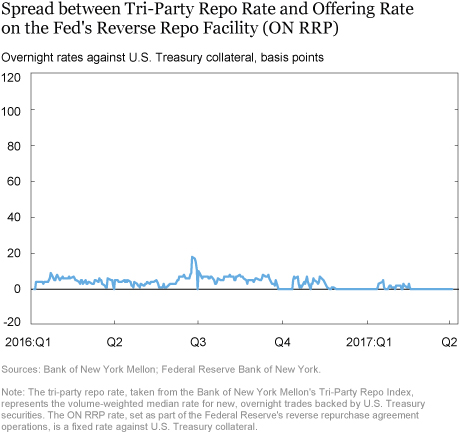 GCF Repo
We now turn to the GCF repo market. This segment, which includes interdealer activity settled on the tri-party platform, is interesting, in part, because interdealer repos are cleared by the Fixed Income Clearing Corporation (FICC). FICC plays the role of central counterparty in this market, meaning that it stands between counterparties to a trade, becoming the buyer to every seller and the seller to every buyer. This is important because accounting and regulatory capital rules allow a bank to record the net value of two transactions on its balance sheets if these transactions have the same counterparty and maturity date and satisfy other technical requirements.

U.S. banks also exhibit quarter-end trends in the GCF repo market—a pattern they do not display in the tri-party repo market. This is largely because of the nature of GCF repo transactions; in this market, the net position across all banks must always be zero, as every dollar lent by one bank must be borrowed by another. In other words, any change in the net activity of a subset of banks has to be offset by a corresponding change for the other banks. Thus, the quarter-end movements of U.S. banks are likely a result of European banks’ shifts in activity. Indeed, while European banks reduce their gross activity somewhat on quarter-end dates to achieve their desired net-zero position, U.S. banks increase their gross activity. 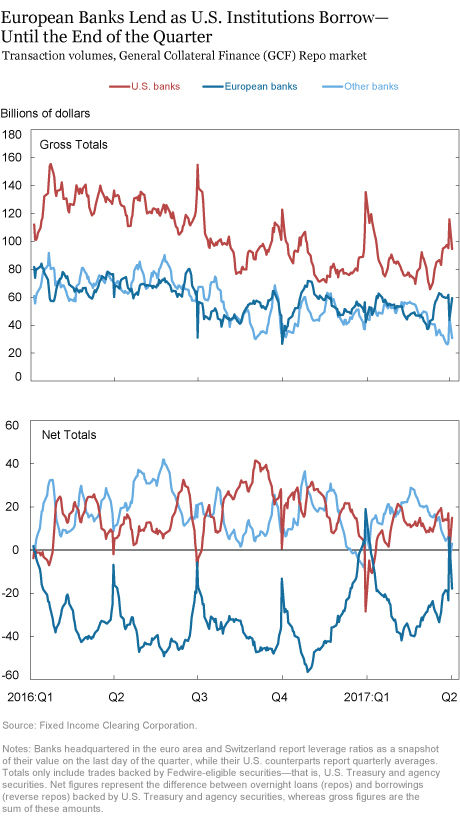 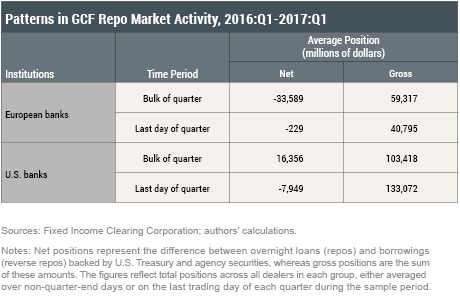 If the shift in net lending at quarter-end is driven by European banks’ reduced willingness to lend, then borrowers should need to increase the rate they offer to pay to attract the cash they need. The chart below, which displays the spread between the rate in the GCF repo market and the ON RRP offering rate, shows that this is the case (albeit not at the end of 2016). 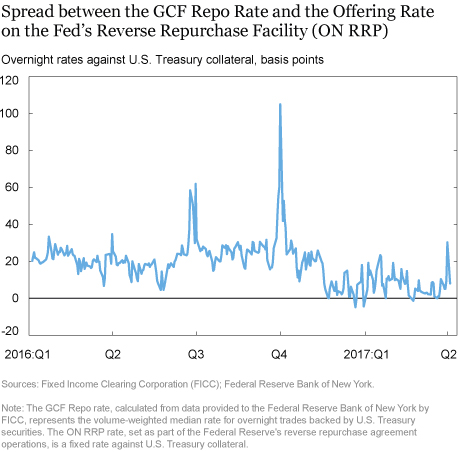 Conclusion
Our findings suggest that the implementation details of financial regulations can have important implications for global financial markets. In this example, differences in implementation of the leverage ratio in the United States compared to Europe appear to have a significant impact on the U.S. repo market. Another important lesson is that financial regulations can impact monetary policy implementation. Here, the ON RRP facility appears to have played a useful role as a shock absorber in the tri-party repo market by limiting the effect of variations in European banks’ demand for funds on broader money market conditions.

Noah Zinsmeister is a senior research analyst in the Bank’s Research and Statistics Group.

Thank you for your comment. U.S. dealers that are subsidiaries of bank holding companies and those that are not appear to be behaving roughly the same way over our sample. This is not necessarily surprising now that U.S. dealers subject to the leverage ratio have had time to adapt. These two types of dealers likely responded differently to the introduction of the leverage ratio, but this episode is outside our sample.

This is highly informative research.

With respect to the GCF market, it would also be interesting to see the implications of data bearing on the distinction between dealers that are subsidiaries of bank holding companies (thus subject to the U.S. leverage ratio rule) and dealers that are not.

Thank you for the excellent work.