« The Banking Industry and COVID-19: Lifeline or Life Support? | Main | Weathering the Storm: Who Can Access Credit in a Pandemic? »

Are People Overconfident about Avoiding COVID-19? 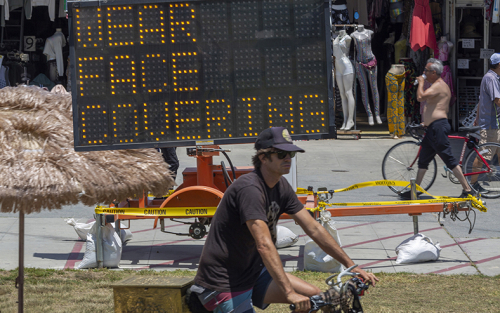 More than six months into the COVID-19 outbreak, the number of new cases in the United States remains at an elevated level. One potential reason is a lack of preventative efforts either because people believe that the pandemic will be short-lived or because they underestimate their own chance of infection despite it being a public risk. To understand these possibilities, we elicit people’s perceptions of COVID-19 as a public health concern and a personal concern over the next three months to the following three years within the May administration of the Survey of Consumer Expectations (SCE). This post reports results from these survey questions.

We begin by studying the differences between survey respondents’ perceived public and personal exposures to COVID-19. In the following histograms, a positive value indicates that a respondent expects a higher risk to the public than to themselves personally. Consistent with well‑documented overconfidence biases in the general population, there is a significant gap between the perceived public and personal risks, especially in the near term. For the three-month horizon, the expected personal exposure is lower than the public exposure by 17.5 percentage points. These gaps fade over time, essentially becoming zero at the three-year horizon. These results hold promise in partly explaining why COVID-19 has been difficult to contain. 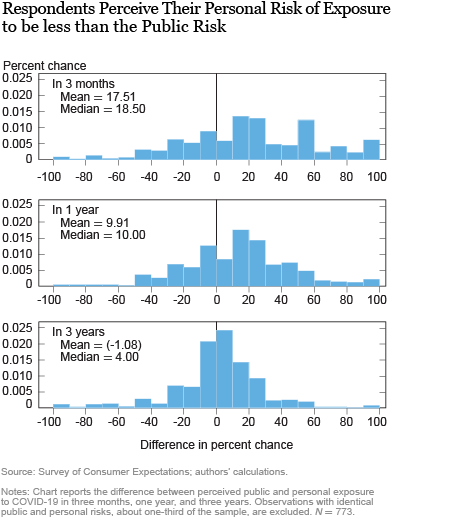 Leveraging a rich set of variables collected in the SCE, we study how overconfidence varies across demographic groups, locations, and an information treatment that we designed about a potential second wave of COVID-19. We use the term overconfidence to denote the gap between the perceived public and private risks. Note that in certain cases, such a gap could be rational. For example, workers with the flexibility of working from home might be less exposed to the virus, therefore expecting a lower personal risk.

The next chart reports results from binary regressions of overconfidence on a set of characteristics, including a college education, age, income, a county-level COVID-risk measure, the county-level number of COVID-19 deaths, and an information treatment of the potential second wave. We can see that respondents with a college education and a higher income are more likely to report a lower personal risk relative to their perceived public risk. This could reflect that high-income workers have more flexibility to telecommute or have more resources to avoid social interactions. Older individuals are more likely to report a higher personal risk relative to the public risk, consistent with the age dependent COVID-19 mortality rate. Surprisingly, there is no significant relationship between the severity of the local outbreak and overconfidence.

To test how information might affect people’s perceptions of COVID exposure, we show half of the respondents (the treatment group) one sentence about a potential second wave before eliciting their beliefs: “Viral pandemics in the past, such as the 1918 Flu Pandemic, have included a ‘second wave’ in which the initial containment of the virus is followed by a second peak of infections.” While our prior assumption was that such an information treatment would induce people to expect a more prolonged pandemic, the treatment group actually reported significantly lower public and personal risks than the control group did, especially a much lower personal risk, as shown by the last blue bar in the chart. One explanation is that terms like “initial containment” or “a second wave” make respondents believe that the ongoing wave could subside soon without significant public health interventions. This suggests information about past pandemics could change people’s perceptions in unexpected ways. 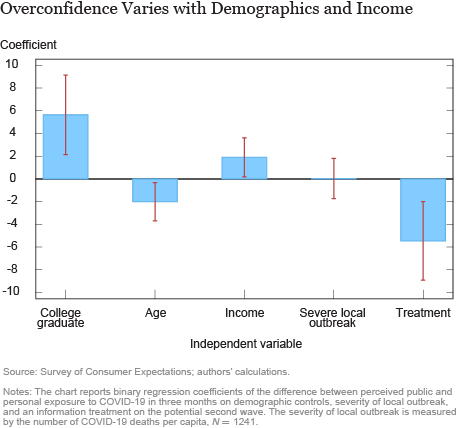 The next chart demonstrates public, private risk, and overconfidence as functions of standardized income in our sample. From the average levels, we can see that households perceived a high chance for a relatively prolonged pandemic when they filled out the survey (in May 2020). A median household in our sample expected an 80 percent chance that COVID-19 will be a public concern for the three-month horizon (till August 2020) and a 40 percent chance over one year (till May 2021). Also, households with higher income expect both higher public and personal risks. In other words, even though high-income respondents expect themselves to be less affected by COVID than the public, their expected personal risk is still higher than that of low-income respondents. 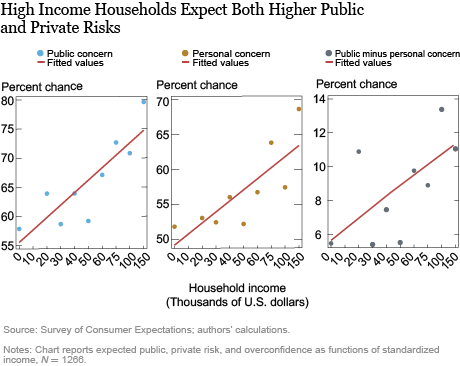 In summary, we show that people expect significantly lower personal exposure than the public exposure to COVID-19, which we refer to as overconfidence. Overconfidence is stronger for higher income and younger households. Also, overconfidence is distinct from absolute confidence. For example, while higher income respondents expect to be less exposed to COVID-19 than the public, their perception of personal risk is still higher than those of low-income respondents. These results suggest that behavioral biases could contribute to the spread of COVID-19.


Rawley Heimer is an assistant professor at Boston College.

Kelvin: Although we don’t have information on respondents’ professions from the survey, it has a set of questions on how feasible it is for a respondent to work from home. We can use that information to do more analysis on some of those issues.

Does your data set include information regarding the individual’s job? Although higher income households are more likely to be able to work-from-home, it does not mean that all high income persons can work-from-home. The same is true for lower income households. An example of lower income jobs that could be compared are cashiers to call center workers. (This is assuming the employer allows work from home.) An example of higher income jobs is a doctor compared to computer programmer.