How Has China’s Economy Performed under the COVID-19 Shock? 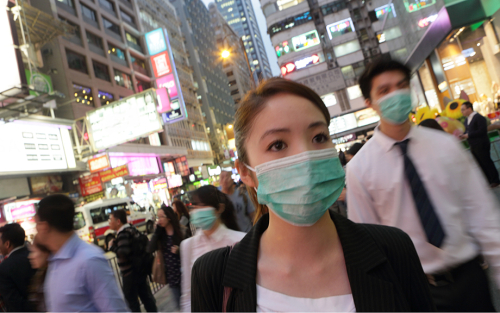 China’s economy was the first to be hit by the COVID-19 outbreak, the first to be locked down, and the first to begin an economic recovery. We examine the impact of the COVID-19 crisis on China’s GDP growth using a set of alternative growth indicators. Our analysis finds that China’s official GDP growth figures over the first three quarters of this year have been broadly in line with alternative indicators and that growth presently is staging a strong rebound and providing a boost to the global economy. However, this rebound faces potential headwinds in the forms of high levels of debt, declining return to capital accumulation, and a shrinking working-age population in China.

Our analysis of China’s economic performance focuses on alternative growth indicators, or proxies, due to long-standing controversies over the accuracy of China’s official GDP growth statistics; indeed, alternative indicators are widely used by close followers of the Chinese economy and utilize a range of different variables. For example, a popular metric is the average of the growth rates of bank loans, electricity production, and rail freight, which is referred to as the “Li Keqiang index” after statements made in 2007 by the current premier, Li Keqiang, then a provincial official, to the effect that he used those indicators to monitor economic activity in his province.

Our alternative indicators are based on methodologies recently published in a special China-focused issue of the New York Fed’s Economic Policy Review (EPR). The first two proxies use weighted indexes of certain economic variables, with the weights derived from regressions of satellite nighttime lights on provincial level data. It is well-established that satellite nighttime lights are strongly correlated with measures of economic activity, both in terms of levels and growth rates. We refer to one approach as “NTL-Narrow,” and it is based on the “Li Keqiang index” in that it uses similar underlying series, but also includes official GDP growth, as we find it to have explanatory power. The nighttime lights regression suggests placing a considerably larger weight on loans relative to electricity and rail freight than does the original Li Keqiang index. The second alternative indicator we refer to as “NTL-Broad,” which incorporates a broader range of data, such as air passenger transport and retail sales, among other sources. Finally, the third indicator uses a methodology called sparse partial least squares regression (SPLS), which employs a very broad range of about sixty-two monthly series and is “trained” to explain variation in China’s imports, retail sales, and a diffusion index of industrial production.

The two panels in the chart below compare the average of our alternative indicators to China’s official GDP and to China’s imports, as reported by exporting countries, following the method of Fernald, Hsu, and Spiegel up through the middle of 2019. The reason to compare the alternative indicator to China’s imports is two-fold: First, imports are expected to be well-correlated with China’s business cycle, so they should provide a window into China’s true economic performance. And second, by using China’s imports as reported by its trading partners, we can bypass inaccuracies in China’s own statistical system. All the data have been converted to similar units in that the average and standard deviation of each series are zero and one, respectively. 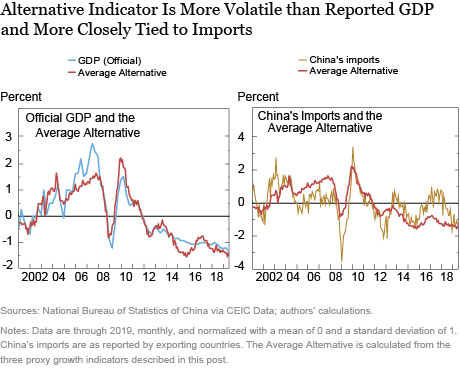 GDP, imports, and the “Average Alternative” indicator show similar cyclical patterns until around 2013, when the official GDP figures become much smoother through about the middle of 2018, after which the series track each other more closely again. The Average Alternative shows more cyclical variation in growth than has been reported in official GDP over at least the past five years. By contrast, the alternative indicator performs better than official GDP data with China’s imports over this same period. The details of these indicators and their correlations with both Chinese and global activity are beyond the scope of this post, so the interested reader should refer to our EPR article for the technical discussion.

What do the alternative indicators say about China’s GDP growth immediately before, during, and after the COVID-19 lockdown? We focus on relative changes in growth rates in terms of units of official GDP, since we cannot identify the “true” growth rate under any of our methodologies, but can make comparisons of the values of our alternative indicators over periods of time. For reference, China’s official GDP growth rate dropped from about 6 percent in the fourth quarter of 2019 to -6.8 percent in the first quarter of 2020, and then rebounded to 3.2 percent and 4.9 percent in the second and third quarters, respectively, of 2020.

The charts below plot the change in growth, relative to the end of 2013, as implied by the average of our three alternative indicators against the change in the official growth rate (left panel), and the three alternatives separately (right panel). First, there is no evidence that the decline in the official GDP growth rate in the first quarter was understated—in fact, the average of the alternatives declined by roughly two-thirds as much. We therefore argue that the official statistics correctly portrayed the magnitude of the COVID-19 hit to GDP growth in China. There is no evidence from these indicators that the authorities “sugarcoated” the growth data. 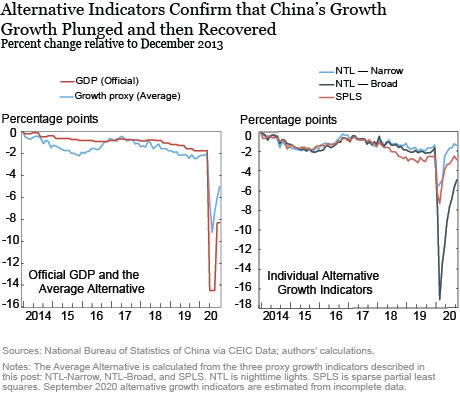 Second, there is considerable variation among the alternatives themselves. The NTL-Broad indicator shows a larger decline in GDP growth than did the official statistics, while the other indicators tend to be closer together and show smaller declines. These differences largely reflect the degree to which the alternatives capture declines in service-oriented versus goods‑producing sectors. Both the NTL-Broad and the SPLS alternatives better include—albeit imperfectly—service-oriented industries compared with the NTL-Narrow. This is a very important distinction because a key, and essentially unprecedented, feature of the COVID-19 crisis has been a collapse in service-oriented activities, both in China and around the world. For this reason, we believe that the NTL-Broad and SPLS indicators are giving the best read on China’s economy at present. However, the NTL‑Broad may be putting too much weight on the collapse in air passenger traffic and real estate activity in the first quarter, while the SPLS may be better reflecting the fact that some important goods-producing sectors (such as heavy industry, medical equipment, and electronics) held up relatively well.

The alternatives suggest that the growth rebounds in the second and third quarters were strong, but perhaps not as large on average as portrayed in the official statistics. The cumulative change in growth during the first three quarters of 2020 ended up being very similar in both our alternative and the official data. By all accounts, manufacturing, infrastructure investment, and property construction have rebounded quite strongly in China, responding to government-directed fiscal and credit stimulus. By contrast, consumption in China has experienced a slower rebound and showed positive year-over-year growth only in the third quarter of this year.

China was “first in, first out” of economic “lockdown” under the pandemic and appears poised to show quite strong quarterly growth for the remainder of 2020. China’s economic rebound should be driven by domestic economic stimulus, as evident in a large increase in its aggregate credit impulse (the change in new credit as a percent of GDP), as illustrated in the chart below. With China possessing the world’s second largest economy (at market exchange rates), a strong rebound in China should help attenuate declines in economic activity elsewhere. Indeed, during its recovery from the global financial crisis, China’s GDP grew by over 9 percent for nine consecutive quarters. 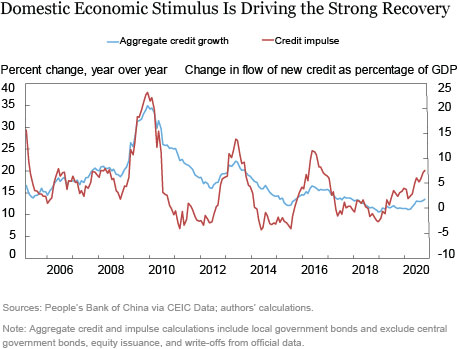 But there are reasons why the strength of rebound might not last. As discussed in our EPR article, the accelerating phases of China’s business cycles have lasted only about four quarters over each of the past three cycles, less than half the length of the cycles during the early- to mid-2000s. The shorter periods of stimulus reflect the government’s on‑again, off-again efforts to rein in the high growth of debt at the local government, corporate, and, increasingly, household sectors. Given the recent trend of policy cycles, by the first or second quarter of next year, China may well be tightening macroeconomic policy again due to concerns over financial stability. Moreover, as discussed by our colleague Matthew Higgins in his article in the EPR’s special issue, growth in China was already facing structural headwinds even before the COVID-19 crisis, owing to demographics and declining returns to capital accumulation. Higgins lays out three scenarios for growth over the coming decade under which per capita income growth could slow to between 2.7 percent to 4.9 percent, both of which would be well below the official per capita growth rate of about 6 percent in 2019.