« Weathering the Storm: Who Can Access Credit in a Pandemic? | Main | COVID-19 Has Temporarily Supercharged China’s Export Machine » 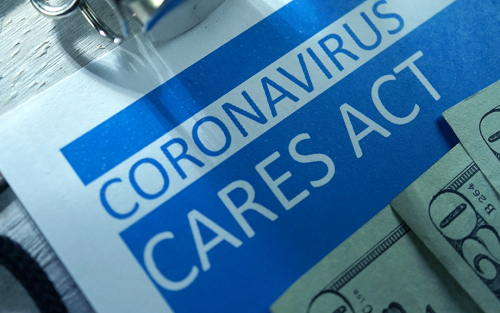 As part of the lump-sum economic impact payments, qualifying adults received $1,200, with an additional $500 for each child. In order to document how households used these payments and how they are planning to use a potential second round of payments, we draw on the New York Fed Survey of Consumer Expectations (SCE). Since June 2013, the survey has been collecting information on household heads’ economic expectations and behavior. The SCE is a nationally representative, internet-based survey of about 1,300 U.S. households. In addition to the monthly core questionnaire, special modules are fielded at regular frequencies on planned topics and on an ad-hoc basis to answer policy-relevant questions in a timely manner. The analysis in this post is based on data collected as part of two special surveys on the pandemic fielded in June (between June 10 and June  30) and August (between August 6 and August 21).

Consuming, Saving, and Paying Off Debt

In the special June SCE survey, 89 percent of respondents reported that their household received an economic impact payment, with the median payment being $2,400. We also asked what share of this payment the household had used to spend or donate, save or invest, and pay down debts. In a follow-up question, respondents were asked to divide up the share reported for the first group into categories: spending on essential items (such as necessary daily living expenses), spending on non-essential items (such as hobbies, leisure, vacation, and other items respondents do not absolutely need), and donations. An average 18 percent of these funds was used for essential spending and an average 8 percent used for non-essential spending, resulting in a total MPC of 29 percent after including the 3 percent of the funds donated. We also find that an average 36 percent of the payment was saved and an average 35 percent was used to pay down debt. The unprecedented high uncertainty about the duration and the economic impact of the pandemic, the social distancing rules and restrictions on in-person shopping, and delayed rent payments (which economists count as consumption) may all have contributed to the small MPC estimates we find.

As shown in the table below, the share of the economic impact payment spent on essential items increases with age and declines with income, while these relations operate in the opposite direction for the share of funds spent on non-essential items. The results reveal substantial heterogeneity in the average share of funds saved and used to pay down debt. Respondents who are non-white, without a college degree, in lower-income households, and in households experiencing negative employment shocks or income drops since the start of the pandemic are more likely to use substantially larger shares of their economic impact payments to pay down their debts, while for the respondents who are less likely to be cash-constrained, saving motives are dominant. 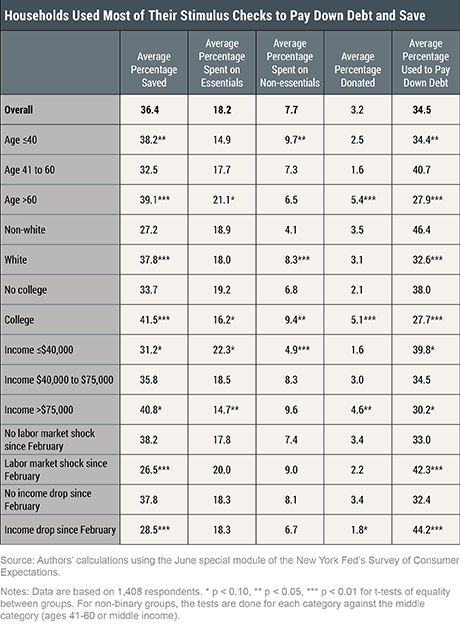 In the special August survey, we elicited similar information about expected uses of a potential second round of federal transfer payments, asking how respondents would use an additional $1,500 if received. Results presented in the table below show that, out of this second round of payments, respondents are expecting to spend an average 14 percent on essential items and an average 7 percent on non-essential items, for an aggregate MPC of 24 percent (including donations). The lower expected MPC in this round may reflect a difference between expected and realized spending from transfers as found in previous literature. A lower MPC for the second stimulus payment may also simply capture diminishing returns to additional temporary income increases. Interestingly, the difference between the ex-ante and ex-post MPCs comes mostly from a lower share of future funds expected to be spent on essential items. Differences across demographic groups in the expected uses of a second stimulus payment are largely similar to those discussed earlier for the first payment. 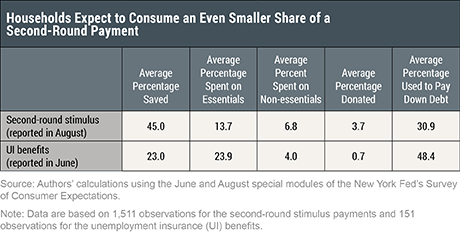 Next, we analyze how the respondents who were on unemployment insurance (UI) in June, at the time they took the survey, used these benefits. As indicated by the table above, the average share of funds saved (23 percent) out of UI checks is much lower compared to the reported saving rate out of the stimulus checks. This difference, of course, is most likely related to the fact that those who are on UI are more likely to be credit- and cash-constrained. Similarly, we observe that the average shares of funds used to pay down debt (48 percent) and spent on essential items out of UI checks (24 percent) are significantly higher than the respective shares reported from stimulus payments. The addition of spending on non-essential items and donations brings the total MPC out of UI checks to 29 percent.

Finally, we consider forbearance and other debt relief programs enacted following the start of the pandemic, and examine whether those receiving this temporary support used their stimulus checks differently. We find the subset of respondents who received others forms of debt payment relief (such as on rent, mortgage, credit card, or auto loans) on average used a generally larger share of the first stimulus check to pay down debt, and (except for those receiving mortgage forbearances) used less of it for immediate consumption. When comparing their planned uses of a future stimulus check, we find that average planned uses of the second disbursement by debt relief recipients to be similar to their uses of the first stimulus check.

Our analysis shows that, while economic impact payments have been acting as a significant boost to the economy, households spent a relatively small share (29 percent) of these payments by June 2020 and allocated the remaining funds equally between saving (36 percent) and paying down debt (35 percent).

Our survey results indicate that households expect to consume even smaller shares of a potential second round of stimulus payments, while they expect to use a higher share to pay down their debt. When we consider the use of UI checks, we find similar small average shares of consumption and that households use a larger share of these funds to pay down debt. Households who are on forbearance programs look similar to UI recipients in how they use this extra income. These findings indicate that the economic impact payments, by increasing both household income and the debt pay down, contributed importantly to the sharp increase in the overall saving rate during the early months of the pandemic.

Jessica Lu is a senior research analyst in the Bank’s Research and Statistics Group.