How Bank Reserves Are Distributed Matters. How You Measure Their Distribution Matters Too. -Liberty Street Economics The 45-degree line is the Lorenz curve for a hypothetical economy in which reserves are distributed evenly across reserve-holding institutions (the line of equality): in such an economy the bottom 20 percent of reserve holders holds exactly 20 percent of reserves. In contrast, if all reserves are held by one institution, the curve is flat for all percentiles except for the last percentile, which contains the institution holding all the reserves.

The Evolution of the Distribution of Reserves
The chart below presents the Lorenz curves of reserves for two periods: July 2013-December 2014 (blue) and January 2015-December 2018 (red), corresponding to expansion and decline of reserves. As the left-hand panel shows, in both periods, reserves are very concentrated: the curve is practically flat until, at the least, the 99th percentile and becomes very steep afterwards. 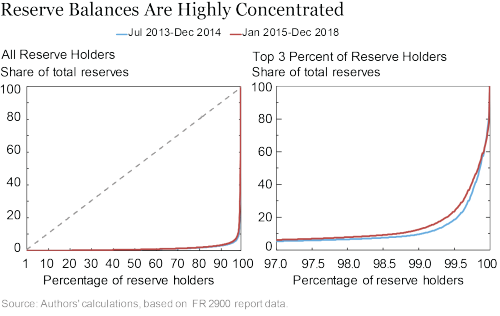 The right-hand panel zooms into the right portion of the curve, focusing on the top 3 percent of reserve holders. Overall, reserves were less concentrated in January 2015-December 2018 than in July 2013-December 2014, as indicated by the upward shift of the Lorenz curve (from blue to red). Note that this upward shift of the Lorenz curve during the 2015-18 period contrasts with the fact that the share of reserves held by the top five institutions actually increased during that period. This highlights the differences between using a measure of concentration that focuses on the share of a specific set of institutions and a measure that summarizes the entire distribution.

A common way to summarize the degree of concentration of a Lorenz curve is through the Gini coefficient, which is the ratio of the area between the line of equality and the Lorenz curve to the area below the line of equality. This can be seen in the first chart above, where the Gini coefficient is the ratio between the orange-shaded area and the sum of the orange-shaded and the grey-shaded areas. The Gini coefficient takes a value between zero (full-equality) and 100 percent (one institution holds all reserves). As the left-hand panel of the chart below shows, the Gini coefficient has been highly correlated with the level of aggregate reserve balances since late 2013: for instance, it fell sharply in 2018 and 2019 as reserves declined due to the Federal Reserve’s balance-sheet normalization and spiked up in early 2020 (although not to the same levels observed over 2014-17) as reserves increased during the early stages of the COVID-19 pandemic. Indeed, the daily correlation between reserves and the Gini coefficient during 2014-19 is 0.81. 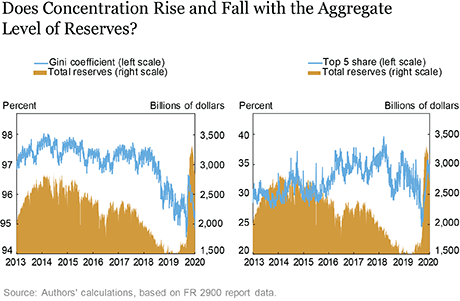 Conclusions
The Lorenz curve and the Gini coefficient are useful tools for characterizing reserve concentration based on the entire distribution of reserves and not just on the share of reserves held by the largest institutions. Since 2013, the Gini coefficient of the reserve distribution has broadly moved in tandem with aggregate reserves: reserves became less concentrated as the Federal Reserve normalized its balance sheet, and they became more concentrated as reserve balances increased during the early stages of the COVID-19 pandemic.

Marco Cipriani is an assistant vice president in the Bank’s Research and Statistics Group.

Steph Clampitt is a senior research assistant in the Bank’s Research and Statistics Group.

Haitham Jendoubi is a senior associate in the Bank’s Markets Group.

Will Riordan is an assistant vice president in the Bank’s Markets Group.