What happened to fed funds rates and quantities over the 2007-09 crisis?

The fed funds market is an ideal laboratory to study liquidity issues that were central to the 2007-09 crisis. To illustrate the key economic forces at play during the crisis, I examine daily rates and quantities of fed funds purchased and sold, as well the spread between these two rates.

The data used in the analysis are the fed funds sales and purchases of three large banks that were considered major players in the market for fed funds from January 2006 to December 2008. Importantly, the data cover both the pre-crisis and crisis periods and allow me to construct both average rates and total quantities of fed funds purchased and sold.

Befitting their intermediary status, these three banks consistently sold fed funds at rates higher than at which they purchased them. This intermediary spread averaged 11 basis points in the pre-crisis period, from January 2006 through July 2007. Starting in August 2007, this spread jumps up to 26 basis points, a 15 point increase. Finally, the spread rockets up to 118 basis points after the bankruptcy of Lehman Brothers in September 2008. This evolution in the intermediary spread is illustrated in the chart below. 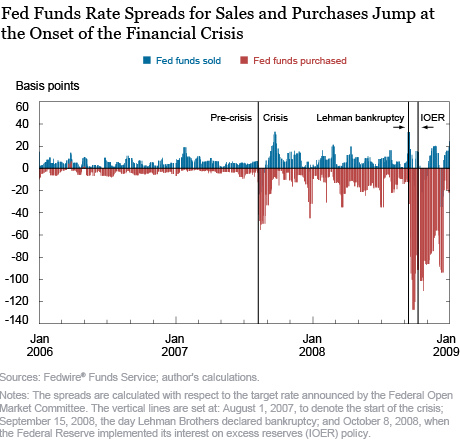 Strikingly, the total amount of funds intermediated by the three banks increases with the onset of the crisis, despite the increases in the intermediary’s spread (see the chart below). Between the start of the crisis and the Lehman bankruptcy, the average total daily amount intermediated is 42 percent greater than the figure for the pre-crisis period ($2.7 billion versus $1.9 billion). Even after the Lehman bankruptcy and the subsequent disruptions to the overall financial system, the total amount of fed funds intermediated by the three banks is 11 percent greater than in the pre-crisis period. 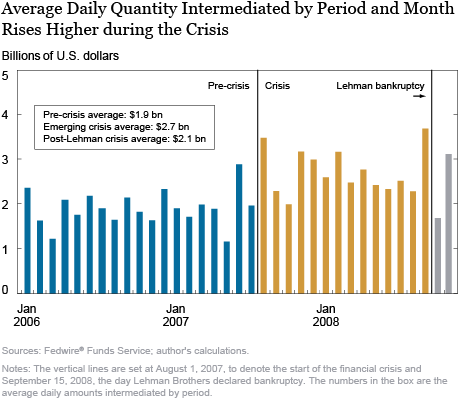 How do we interpret these changes in rates and quantities?

To better understand the various drivers behind these movements in rates and quantities, I develop a model of the fed funds market and take it to the data. I find the model fits the data well, and the estimated parameters have two main implications. First, there is a steady increase in market participants’ beliefs about the probability of default by banks borrowing in the fed funds market. Although it is well-known that market participants’ concerns about default were heightened with the crisis, this analysis is able to precisely estimate this risk. The model implies that with the start of the crisis in August 2007, the expected probability of default by a borrowing bank increases from 0.043 percent to 0.333 percent, and then leaps up to 2.24 percent after the bankruptcy of Lehman Brothers.

What does this mean for market participants and policymakers?

There are two lessons from this analysis. First, policymakers should be aware that the fed funds market is susceptible to small changes in the expected probability of default. Hence, future adverse events which cause banks to become more prone to default are likely to have large negative effects on this market. Second, the fed funds market is considered to be a safe place to invest cash, relative to the other money markets, during a crisis. Given a general adverse shock to the financial system then, policymakers can expect depository institutions to shift their cash investments towards the fed funds market. Even though the fed funds market has changed somewhat since the 2007-09 crisis, it remains an important part of the financial system and so these results are still relevant.