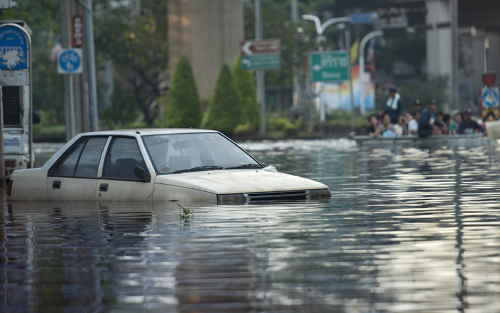 The Economic Consequences of Natural Disasters
Natural disasters have been increasing in frequency and severity, as shown in the maps below. Based on National Oceanic and Atmospheric Administration (NOAA) estimates, in the 1990s, fifty-two disasters occurred that inflicted at least $1 billion dollars in damages, with total damages equal to $269.6 billion. During the 2000s and the 2010s, economic damages increased to $510.3 billion and $802 billion (not adjusted for inflation), respectively. 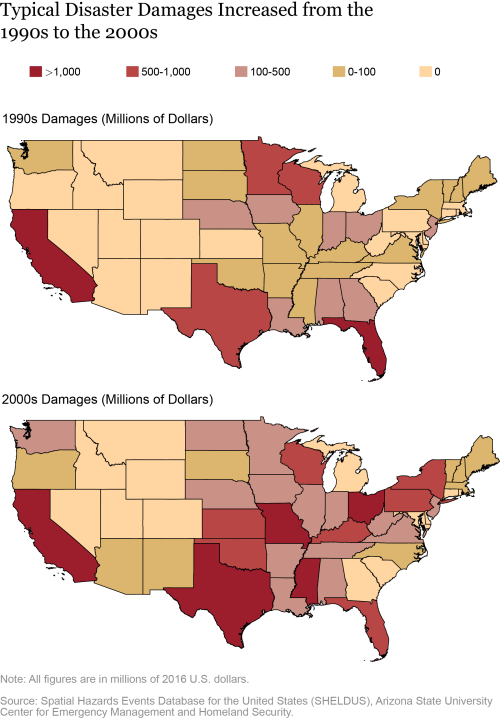 When disaster strikes, demand for bank credit typically increases. If this additional demand is not met locally, the economic effects of the natural disaster may propagate elsewhere. With the liberalization of interstate banking, banks have increasingly expanded their footprints across the United States. While this expansion has provided banks new opportunities to diversify risk, it has also created the mechanisms for banks to spread local shocks to distant regions.

Academic research is increasingly identifying new and unexpected effects of natural disasters. For example, there is evidence from the mortgage markets that local shocks spread to unaffected regions. In this post, which is based on research in our related paper, we investigate whether a similar mechanism is at play in the syndicated loan market.

The syndicated loan market provides a natural laboratory to investigate the effects of credit allocation because it is the main source of funding for midsize and large companies. Moreover, syndicated loans are arranged and funded by banks located in different parts of the country and, therefore, facing different exposures to disaster shocks.

In addition to exploring the role of banks in propagating disaster shocks, our paper also looks at how shadow banks may mitigate the propagation of natural disasters by banks. While loan syndicates used to be dominated by banks, over time nonbank investors—including insurance companies, collateralized loan obligations (CLOs), loan funds, and hedge funds—have significantly increased their presence in loan syndicates. Importantly, these investors gained prominence in the term-loan segment of the market but not in the credit-line segment. This is because shadow banks are at a comparative disadvantage vis-à-vis banks at hedging credit lines’ liquidity risk, given that they do not have access to stable deposit funding.

Credit Spillovers from Natural Disasters
Our results show that, in the corporate loan market, natural disasters lead to an increase in corporate credit demand in affected regions. Specifically, natural disaster shocks translate to an approximately 2 percentage point increase in total syndicated commitments to the average borrower in the affected regions. These effects are substantially larger when we focus on more severe natural disasters, in which case average borrower commitments increase by approximately 5-7 percentage points. This result was expected given that the rebuilding of areas following disasters translates to an increase in economic activity and credit demand.

We also find that in order to meet the higher credit demand, banks reduce credit provisioning to distant regions. To the extent that banks could raise enough deposits to accommodate that increase in credit demand, and that they are not capital constrained, we should not see a reduction in bank credit supply to unaffected regions. However, our results show that banks reduce credit in unaffected regions concurrently with increasing lending in regions affected by natural disasters. We find evidence of a significantly larger lending reduction by banks with lower regulatory capital. Further, these impacts are concentrated in unaffected regions that are relatively less important for the bank’s corporate lending business, suggesting they are bank-driven rather than an outcome of lower demand for credit.

Importantly, overall credit availability to borrowers in distant regions depends on the response of shadow banks, which have significant participation in the corporate loan market. However, we find that shadow banks only offset the reduction in bank supply of term loans but not of credit lines. Borrowers that rely on credit lines suffer a reduction in credit availability of approximately 2.7 percent. Consequently, borrowers in regions unaffected by natural disasters face higher financing costs in the form of lower credit supply.

Summing Up
The findings in our paper highlight a novel spillover effect of natural disasters, one that is likely to grow in importance given the rise in the frequency and severity of natural disasters that has accompanied climate change. We confirm the unique role that banks continue to play in the provision of credit to corporate borrowers via credit lines. Further, we illustrate how shadow banks provide credit to borrowers by substituting for the loss of term loans that are arranged by banks. Given that shadow banks typically do not act as loan arrangers of syndicated credit or only arrange smaller loans, they will not be as effective if banks stop arranging loans in unaffected regions following natural disasters.


Ivan T. Ivanov is a senior economist at the Board of Governors of the Federal Reserve.


Marco Macchiavelli is a senior economist at the Board of Governors of the Federal Reserve.

João A.C. Santos is a senior vice president in the Research and Statistics Group of the Federal Reserve Bank of New York.


Posted by Blog Author at 07:00:00 AM in Banks, Financial Intermediation