« How Has COVID-19 Affected Banking System Vulnerability? | Main | The Impact of Natural Disasters on the Corporate Loan Market » 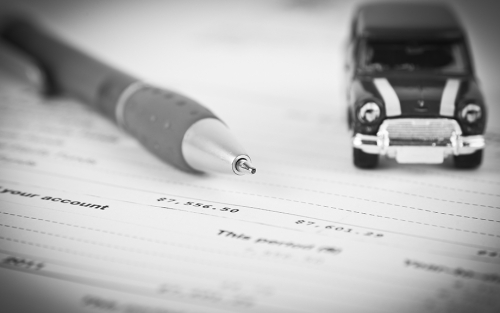 The moratorium on debt service payments during the pandemic

Forbearance provides borrowers the option to pause or reduce debt service payments during periods of hardship, without borrowers’ risk of being marked delinquent. The CARES Act provided for a six-month moratorium on payments on federally guaranteed mortgages and student loans, and voluntary forbearances were offered by lenders of auto loans and credit cards, encouraged by regulators. 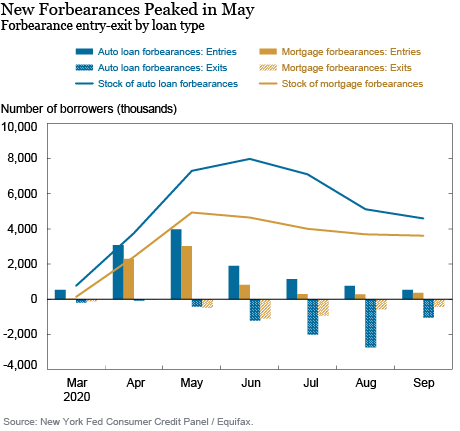 Mortgage forbearance rates differed by mortgage type, as not all were covered under the CARES Act and there is substantial variation in the types of borrowers. In September 2020, 4.2 percent of Government Sponsored Entity mortgages (including Fannie Mae and Freddie Mac) were reported as in forbearance in our data, while the rate was 10.6 percent for Ginnie Mae mortgages (including Federal Housing Administration and Veterans Affairs). Among the rest of the first mortgages, including portfolio and non-agency MBS, the rate was 4.2 percent.

What type of borrowers relied on forbearance?

Next, we look at the performance (and credit report treatment) of loans in forbearance, shown below as the share of balances 30-89 days past due for both those who enrolled in forbearance by May 2020 (solid line) and those who have not taken up forbearance since the pandemic began (dotted line). We use the early delinquency rates as a proxy for loans that have transitioned into delinquency, and to not capture those that had already defaulted before the pandemic. 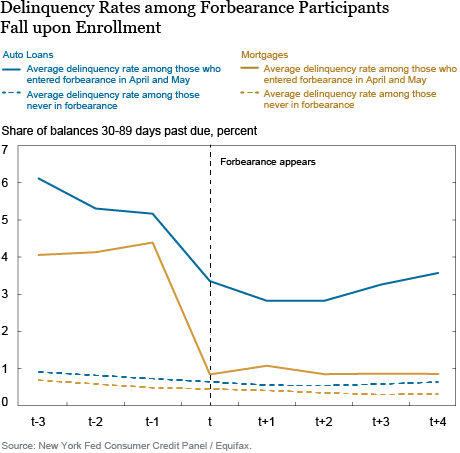 For both auto loans and mortgages, troubled borrowers were far more likely to opt in to forbearances, as evidenced by the higher delinquency rates of participants three months prior to the first forbearance month when we compare the two groups (left hand side of the chart). But most obvious on the chart are the sharp reductions in the share of balances that were 30-89 days past due once the forbearance began. Many lenders have marked forbearance participants who were previously delinquent as current as these borrowers had no payment due for the month. On average, delinquent borrowers whose loans were converted to “current” upon entry into forbearance saw an average 48 point increase in their credit scores (here, Equifax Risk Score 3.0). In contrast, the average credit score of borrowers who were current before the forbearance was unchanged.

The way consumers are weathering this recession has been an important policy discussion, particularly as the cash transfers to households provided by the CARES Act have ended and the forbearances are set to expire. How households will endure the “fiscal cliff” is of significant interest, and we will closely monitor the ability of borrowers to maintain debt payments, especially among borrowers rolling off forbearance as the COVID-19 crisis evolves.